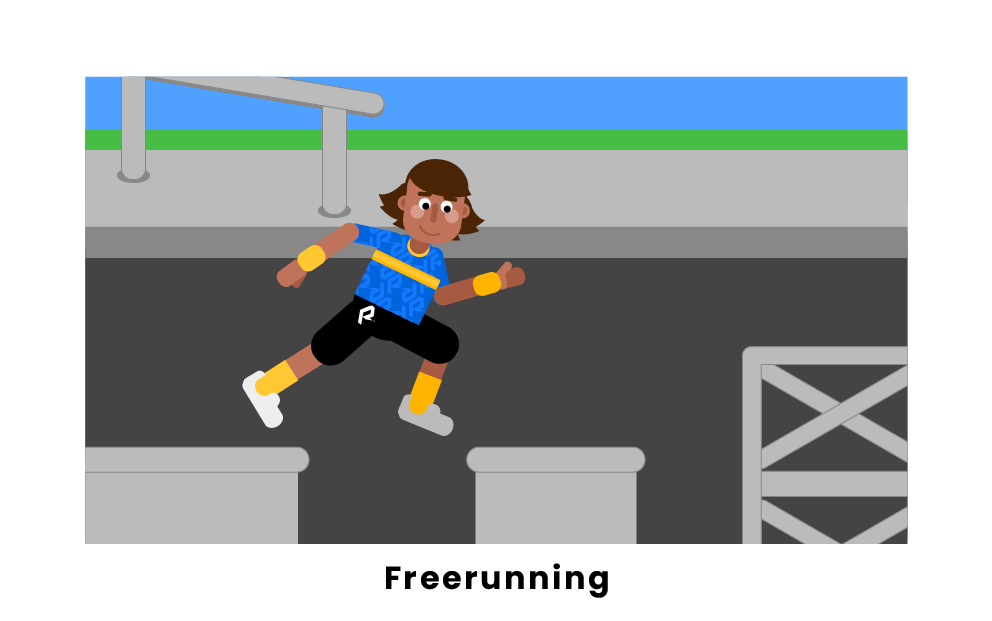 Freerunning is a style of modern-day acrobatics used to navigate through obstacles using jumps, flips, wall climbing, and other physical activities through a man-made or natural environment. Originating in France during the late 1980’s, freerunning has been a part of European culture for decades now. The sport was popularized in world culture through online videos, television commercials, documentaries, and feature films like the James Bond movie Casino Royale (2006). There are numerous freerunning leagues around the world that hold competitions and championship events throughout a calendar year. One of the most popular freerunning leagues right now is the World Freerunning Parkour Federation, which was developed in 2007. Considered one of the best free runners of all time, Dimitris Kyrsanidis is originally from Thessaloniki, Greece. He is a two-time winner and two-time third-place finisher of the RedBull Art of Motion Freerunning competition, the highest-profile freerunning competition in the world.

Unlike its close relative parkour, freerunning is all about the aesthetics of the human body's movements. Freerunning uses either a man-made or natural environment to devise courses with obstacles for runners to navigate through, using a combination of the body’s natural movements and acrobatics. The obstacles runners encounter on a freerunning course are navigated by running, jumping, swinging, vaulting, and climbing.

Where are the best places to go freerunning?

Some of the best places in the world people can go freerunning are typically through cityscapes and natural terrain. At the end of the day, freerunners need to be creative in finding the places to freerun. However, there are a few locations around the world that could be deemed some of the best places to freerun. Two of the best freerunning locations in the world are Brighton, United Kingdom, and Marrakech, Morocco, due to their unique terrain and cityscapes. Two other popular locations are Paris, France, and Madrid, Spain.

What are the biggest freerunning events in the world?

By far, the biggest freerunning event in the world today is the Redbull Art of Motion. The event was founded in 2007 with freerunning legend Ryan Doyle being the inaugural winner of the event in Vienna, Austria. Since then, there have been twelve Art of Motion competitions held in countries such as Brazil, Sweden, Japan, and Greece for freerunners to come together and showcase their unique and diverse skill sets.

Pages Related to What is Freerunning?