What is Stand Up Paddleboard (SUP) Fishing? 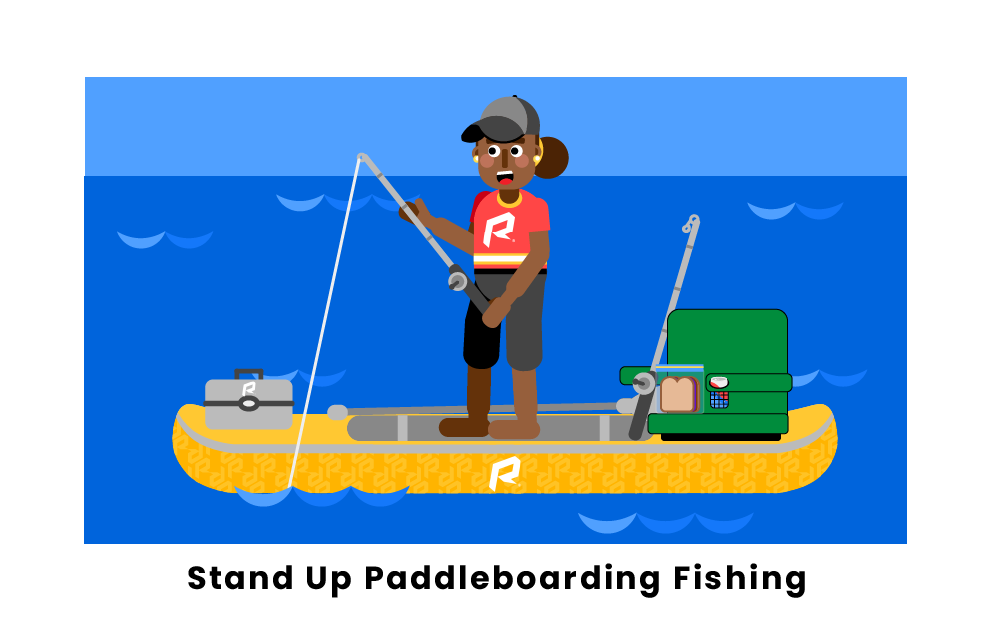 About Stand Up Paddleboard (SUP) Fishing

Stand up paddleboard (SUP) fishing is a sport where a fisherman on a stand-up paddleboard uses various tools to fish on rivers, lakes, or other bodies of water. SUP fishing is a popular recreational activity, but it has a long history. The earliest roots of SUP fishing can be traced back to ancient times, and it existed in various ancient cultures across the globe on continents such as Africa to South America. In these cultures, hunters would often use boards, canoes, and other water vessels propelled by long sticks to fish. In particular, Peruvian fishermen have made use of a vessel known as a “Caballitos de Totora,” a large, boat-shaped board made of reeds, for over 3,000 years.

Modern SUP fishing emerged in tandem with the popularity of modern stand up paddleboarding. SUP began to emerge as a popular sport in the 1940s due to popular surfing instructors such as Duke Kahanamoku, an Olympian from Waikiki, and brothers Leroy and Bobby AhChoy, who would use paddles and stand on their surfboards to get better views of the water. Later developments in SUP are credited to John Zapotocky, who is considered the father of modern stand up paddleboarding, and Rick Thomas, a Vietnam veteran who first brought SUP to California from Hawaii in 2004, whereupon it became immensely popular in the United States. Due to these developments, SUP fishing was born and has become a recognized sport in the modern world.

SUP fishing is regulated by the United States Coast Guard (USCG), who have determined that SUP boards that operate outside of surfing, swimming, or bathing areas are considered “vessels” and thus must be operated under USCG regulations. These regulations are comprehensive and include the sorts of life jackets and gear SUP fishers must carry and navigation rules.

What is SUP fishing?

SUP fishing is a sport where anglers using stand up paddleboards attempt to capture fish. SUP fishing is a popular recreational activity and is an interesting and unique way to fish due to the difference in perspective given to anglers by standing on a board above the water rather than on a pier or shoreline. SUP fishing affords anglers many advantages, such as better height for spotting fish, the ability to navigate into tight spots that larger boats cannot enter, and ease of general transportation.

What type of fish can you catch when SUP fishing?

Various types of fish can be caught while SUP fishing, depending on where and when one decides to fish. However, the most common types of fish caught in SUP fishing are abundant freshwater fish found in lakes and rivers. For example, in the United Kingdom, the most common fish caught while SUP fishing during the summer months are bass, mackerel, pollack, and rasse. Bass are noted as being easier to catch during SUP fishing than by other, more traditional means, as bass usually congregate in areas of the water that are hard to reach by boat but easier to reach by paddleboard. Other freshwater fish commonly caught in SUP fishing include bluegills, carp, catfish, crappie, bass, perch, northern pike, trout, and walleye. For paddleboarders who choose to SUP fish on the ocean, common catches include bluefish, cod, flounder, striped bass, sea trout, tarpon, tuna, halibut, rockfish, sea perch, lingcod, and yellowtail.

What equipment do you need to go SUP fishing?

There are a variety of different pieces of equipment needed to go SUP fishing. The most important is the paddleboard itself, which is typically made of inflatable rubber or fiberglass, and should be large enough to hold the angler’s gear and provide balance. Other important equipment include a net, bucket, rod, and tackle, all vital fishing accessories. Many SUP fishers also invest in pole holders to keep their hands free for paddling while their fishing lines are cast. An anchor is also a wise investment, as it can help keep the paddleboard from drifting away from a good spot. Finally, a cooler for food and beverages and a bucket for the captured fish are both vital equipment for a SUP fisher.

Pages Related to What is Stand Up Paddleboard (SUP) Fishing?