How Does Scoring Work In Ring Toss? 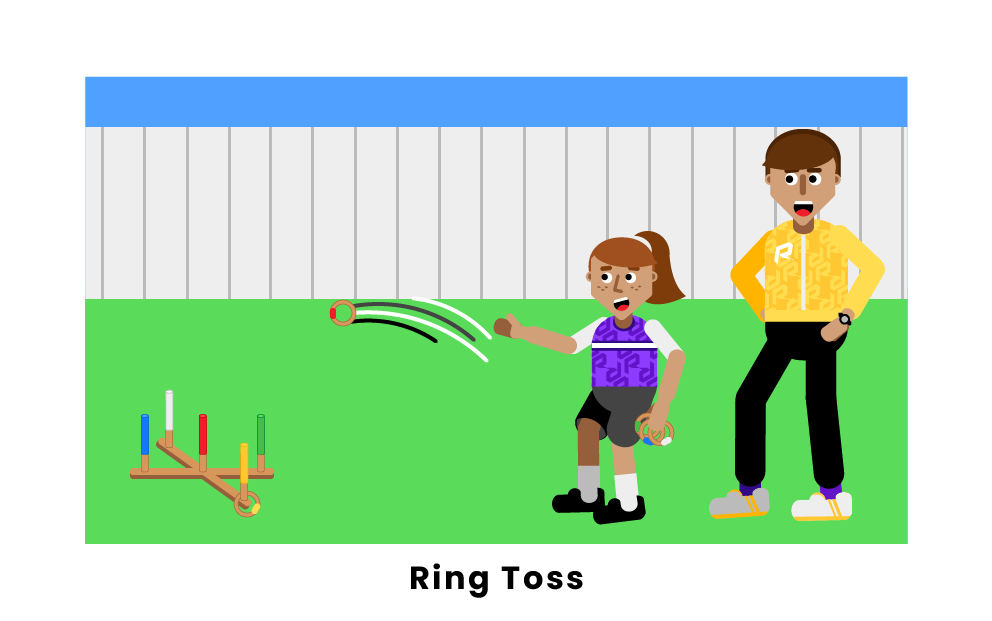 Ring toss is an easy game set up and play that is enjoyed by people of all ages. While many are familiar with seeing this game at a local carnival or fair, there is also a version of the game that can be played at home. Requiring just a few stakes and a few rings, this game can be played anywhere. There are a number of different ways to play, so keep reading to learn how scoring works for each different type of ring toss.

Basic Rules of the Game

The primary objective of ring toss is simple: land the ring around a stake. Much like horseshoes, players attempt to toss a ring over a stake and have it settle at the bottom, resulting in a point. The distance players have to throw can vary depending on how much of a challenge is desired, and the setup of the stakes can also change. Another variable is the number of rings each side gets. In some versions, players each receive two rings to throw, while other versions have three rings per person (or team, in the case of doubles). Games are usually played to 21, where the first side to reach the point total wins.

The most basic way to play ring toss features just two stakes. Opponents stand on the opposite side of their stake and take turns throwing their rings at it. Although there is no universally-set amount of points needed to win, most games go to 21. The number of points scored per successful throw can count in two ways: players can agree either to count a ringer as one point or three, with the same amount of points being added per additional successful throw. If one ringer counts as three points, two would be six, and three would be nine.

Players can also decide whether or not to incorporate nullifying rules into the scoring of the game. Like in cornhole, scoring can be set up so that only the side with more points wins the round. If ringers are worth three points like the example above, then if one player lands two ringers and the other lands one, the first player receives three points, and the second player receives none. This is because the three points scored by the second player are deducted from the six points scored by the first player. Opponents can also decide to play straight up, meaning all points count at the end of each round. In some cases, rules are put into place to address a round with no ringers. If this happens, players can agree to award one point to the side whose ring is closest to their stake.

A slightly-more advanced setup than two stake ring toss, five-stake games offer many more opportunities for players to score. In this version of the game, an x-shaped base supports four stakes at each corner, with an additional stake being placed in the center. The outer stakes are worth one point per ringer, while the center stake is worth three. Much like the two-stake setup, most games are played to 21, and games can be played either head-to-head or in teams of two. Also, like two-stake games, players can decide to either score on a nullifying basis or simply play straight up, with each point counting every round. In team play, both sides can agree to switch sides at 11 points so that neither team gains an advantage based on the target they are throwing to.

While the two and five-stake setups are the most common for backyard play, ring toss can take on many different forms. The most well-known version is played at carnivals, where a number of glass bottles are set up in a grid. In this case, most often, a player is given three chances to land a ring around the top of any one of the bottles. If they are successful, a prize is awarded.

Another type of ring toss that can be played includes setting up in a body of water. Sometimes seen at carnivals as well, though more commonly found in a pool, this version of ring toss has floating targets that require players to toss a ring around them. This form of the game can be more difficult as the targets are not set in place and can move during a player’s turn, and if played in a pool, the angle of the throw can be tough to master.

How many points does it take to win ring toss?

How are points tallied at the end of each round?

In the most basic version of the game, points are awarded to each team based on the number of ringers they have thrown. However, some people can decide to play with scoring rules similar to cornhole, where points cancel out and only the side with the most points in a round takes home any score. In this scenario, if one side gets two ringers and the other side gets one, only the first side would be awarded points for one ringer. Players can also decide to award points in a round where neither side lands a ringer by giving a point to the team who came closest to their stake.

What is the difference in scoring between two stakes and five stakes?

In a two-stake setup, players earn a set amount of points for each ringer they land. Depending on how long they want the game to last, they can make a ringer worth either one point or three points. In a five-stake setup, players have the opportunity to score either one or three points. The outer stakes are worth one, while the center stake is worth three. In both setups, players can add to their totals by landing multiple rings on the same stake. So, if a player were to land two rings on the center stake in a five-stake game, they would earn six points.

Pages Related to How Does Scoring Work In Ring Toss?