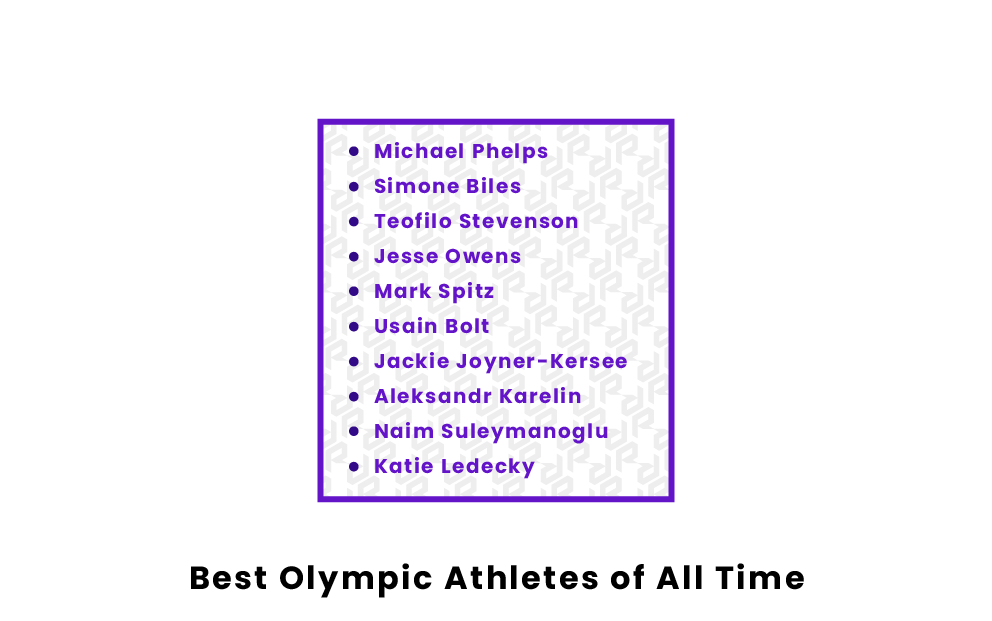 The Olympics have been a worldwide attraction for over 125 years, with millions of athletes competing. The ten individuals on this list have changed the Olympics with their amazing talent and their dedication to winning a gold medal.

What are the best Olympic Athletes of all time?

Michael Phelps is an American swimmer known most for competing in five Olympic Games. He is the greatest Olympian of all time because of his many accolades. He has been competing in the Olympics since 2000 and, at the age of 15, was the youngest male to compete since 1932. With 23 gold medals in 5 Olympics and seven world records set at the 2008 Beijing Olympics, Phelps is the most well-known Olympian and most decorated athlete in the past 20 years. One of his most important world records is winning eight gold medals in one Olympic Games, which still stands today. Phelps competed in an array of swimming events, including 200m fly, 4x100m free, 4x100m medley, 200m medley, etc. Though he retired after the 2016 Olympics, he remains so influential thanks to the Michael Phelps Foundation, an organization dedicated to motivating and educating young swimmers.

Simone Biles is a female gymnast from the United States. She began her career competing in World Championships from 2013-2019. Being a few months too young to compete in the 2012 Olympics, her Olympic debut was not until four years later. At the 2016 Games, Biles took home four gold medals and one bronze, making her the fourth female gymnast to win four events at one Olympics. Some of her best events are vault, all-around, and floor. Biles also competed in two events in the 2020 Olympics (which did not take place until 2021). She pulled herself from a majority of the events due to her mental health and a condition called the twisties, where gymnasts lose control of their bodies while twisting or flipping through the air. Simone claims that she has not retired from the Olympics, so there is a possibility to see her in the 2024 Olympic Games.

Teofilo Stevenson was a Cuban boxer who is the only boxer to ever win the same Olympic division three times. At 20 years old, Stevenson competed in his first Olympics, where he defeated his first three opponents in TKOs while his final opponent forfeited due to a broken thumb. For this, he was awarded the Val Barker trophy for greatest boxer at the Olympics. Four years later, Teofilo competed again and swiftly defeated all four opponents; he even set a record time of seven minutes and 22 seconds. Stevenson is one of the greatest Olympians because of two astonishing records: the record time of his 1976 knockouts and winning gold in the same division three times. Teofilo never competed in boxing professionally, but these Olympic records are a lasting testament to his power in the ring.

Jesse Owens was a competitor for the United States in the 1936 Berlin Olympics, his only chance due to World War II taking place from 1939-1945. Owens is still notable not only for his spectacular four gold medals but also because of his influence across America and Germany. Adolf Hitler saw the 1936 Olympics as his chance to prove the Aryan race superior. Owens quickly proved this to be incorrect with record-breaking Olympic performances in both the long jump and the 100m dash. His record for the long jump even remained unbroken for 25 years. After the Olympics, Owens struggled to find work but eventually dedicated his time to boys’ guidance activities where he traveled to India and East Asia for the U.S. Department of State, and worked in public relations. For his performance and influence as an Olympic athlete, Owens was awarded the Presidential Medal of Freedom in 1976 and the Congressional Gold Medal in 1990.

Mark Spitz is a United States swimmer who won a remarkable 11 medals in two Olympic Games. At eighteen years old, Mark competed in his first Olympics and won four medals, two of which were gold in team events. Spitz came back at the 1972 Olympics, where he took home a record-breaking seven individual gold medals, a record that would stand until 2008 when Michael Phelps took home eight. Outside of the Olympics, Spitz helped Indiana University win eight NCAA titles as the captain of the swimming team, set 33 world records, and won 24 Amature Athletic Union titles. Mark attempted to leave retirement in 1992 to qualify for the Olympics but was unsuccessful. After his swimming career, Spits became a corporate spokesperson thanks to his legendary status as an Olympic champion.

Usain Bolt is a Jamaican runner who has competed in four Olympic Games. His first appearance was in 2004 in Athens. Bolt unfortunately got a leg injury and was disqualified before he could compete. However, he bounced back and won the 100m and 200m three Olympic Games in a row. Bolt is the only sprinter with this accomplishment, as well as holding the record for fastest 100m dash. Usain has a clean total record of eight gold medals and zero silver or bronze at the Olympics in addition to being the first person to break three world records in different events during one Olympic Game. He retired from running in 2017 with quite a legacy behind him.

Jackie Joyner-Kersee is a United States athlete that competed in four Olympic Games and earned 6 total medals. During her first Olympics in 1984, she earned silver for heptathlon due to a hamstring injury. At the next games, Joyner-Kersee came back and outshone her opponents in both the heptathlon and the long jump. Her heptathlon appearance was, in fact, one of the greatest female appearances of all time, breaking the current record and remaining untouched for over 30 years. Joyner-Kersee could not be stopped, earning herself gold once again in the 1992 heptathlon and being voted as Sports Illustrated’s Greatest Female Athlete of the 20th Century.

Aleksandr Karelin is a Russian wrestler who competed for 3 different teams during his four Olympic appearances. Karelin was also a three-time gold medalist in three consecutive years, the first wrestler to do so. With an overall record of 887-2 and going 13 years undefeated, he is considered one of the greatest wrestlers of all time and was even voted as such four times. With his signature move, the reverse body lift, Karelin was incredibly strong and intimidated many of his opponents. Karelin carried the flag at three of his four Olympic appearances, once for the Soviet Union, once for Russia, and once for a Unified Team. After his wrestling career, Aleksandr got his Ph.D. in pedagogy and worked for the Russian police force before being invited into politics. Karelin has served in parliament since 1999 and was inducted into the International Wrestling Hall of Fame in 2003.

Naim Suleymanoglu was an Olympic Turkish weightlifter who appeared in four Olympic Games. Nicknamed “The Pocket Hercules,” Naim was only 4’10,” but his size was not in question when he broke a career total of 46 world records. He went undefeated for eight and a half years before being defeated at the 1992 European Championships. At the 1996 Olympics, he even broke his own record in order to secure his victory. In 2001, Naim received the Olympic Order, which is the highest award of the Olympic Movement. Naim sadly passed away in 2017, but his long Olympic legacy remains.

Katie Ledecky is a United States female swimmer who has appeared in three Olympic Games. At just 15 years old, Ledecky won her first gold medal in the 2012 London Olympics and demolished an American women’s record that had been in place since 1989. At the 2018 and 2022 Olympics, she added several further gold and silver medals to her roster and now holds three women’s world records. With 15 World Championships and seven Olympic gold medals under her belt, Ledecky is the most decorated female swimmer in the sport’s history and hopes to win ever further in the 2024 Paris Games.

Pages Related to Top 10 Best Olympic Athletes of All Time