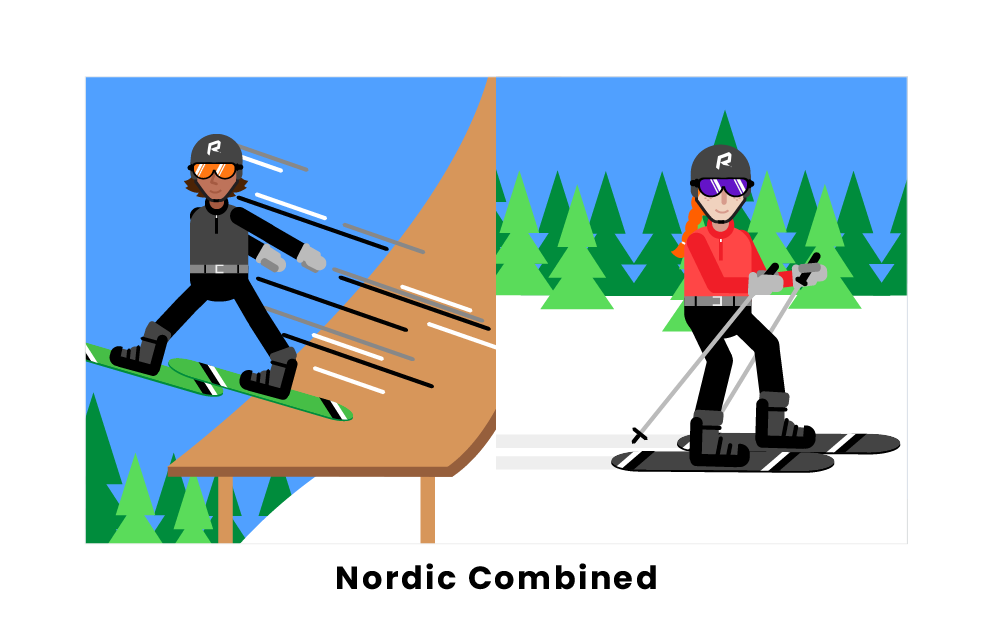 Nordic Combined is a sport that involves ski jumping and cross country skiing.These two activities are performed separately, but are put together to provide a winner. The ski jump portion takes place first and players score depending on the distances they jump. As a result of their scores, players begin the cross country skiing portion staggered based off of their ski jumping scores. Nordic Combined is an international sport and an olympic sport. 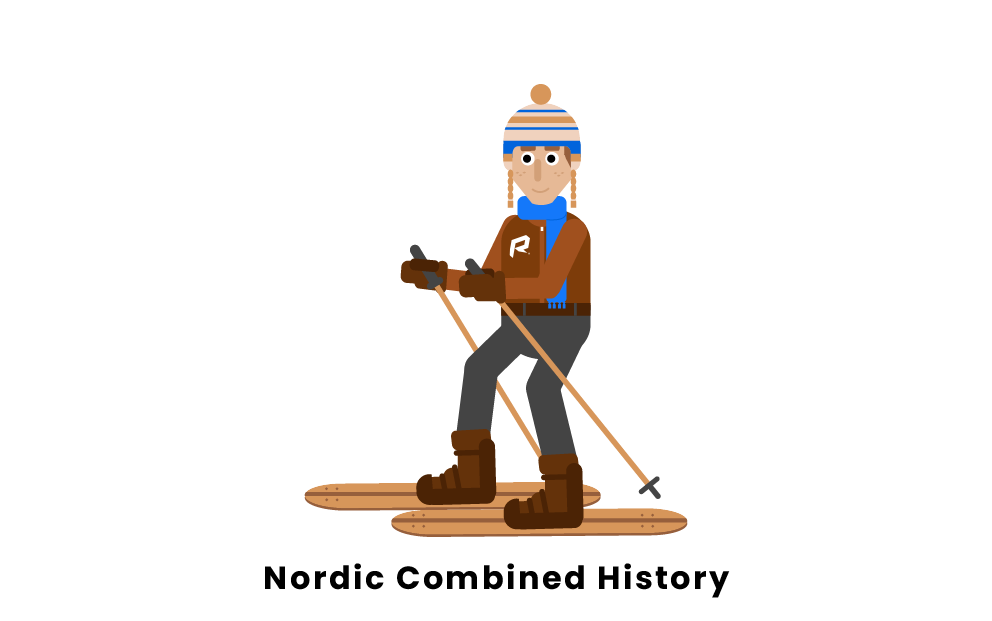 Nordic Combined originated in Norway in the mid 1800s. The first major competition did not occur until 1892 in Oslo, Norway. Nordic Combined was first introduced to the Olympics in the 1942 Winter Olympics, and has been in the games since. Originally, cross country skiing was done before the ski jumping. These two events were switched in the 1950s.

Until recently, women's competitions were not approved by the International Ski Federation. However, in 2016 the first competitions were held and women's Nordic Combined will be included in the 2022 Winter Olympics. 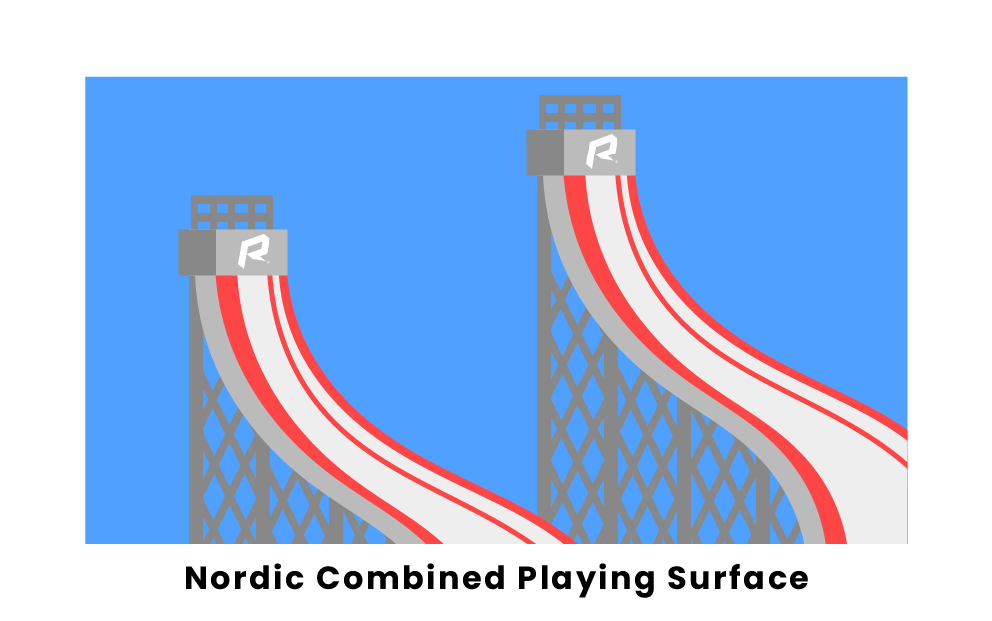 There are two separate playing surfaces in Nordic Combined.

First, the size of the ski jump depends on the event. There are two sizes of hills in ski jumping: normal hill and large hill. The normal hill is 90 meters while the large hill is 120 meters. Participants ski down a long track with a ramp at the end. When the ramp comes to an end, the skiers jump and attempt to fly as far as they can, landing on a snowy decline. 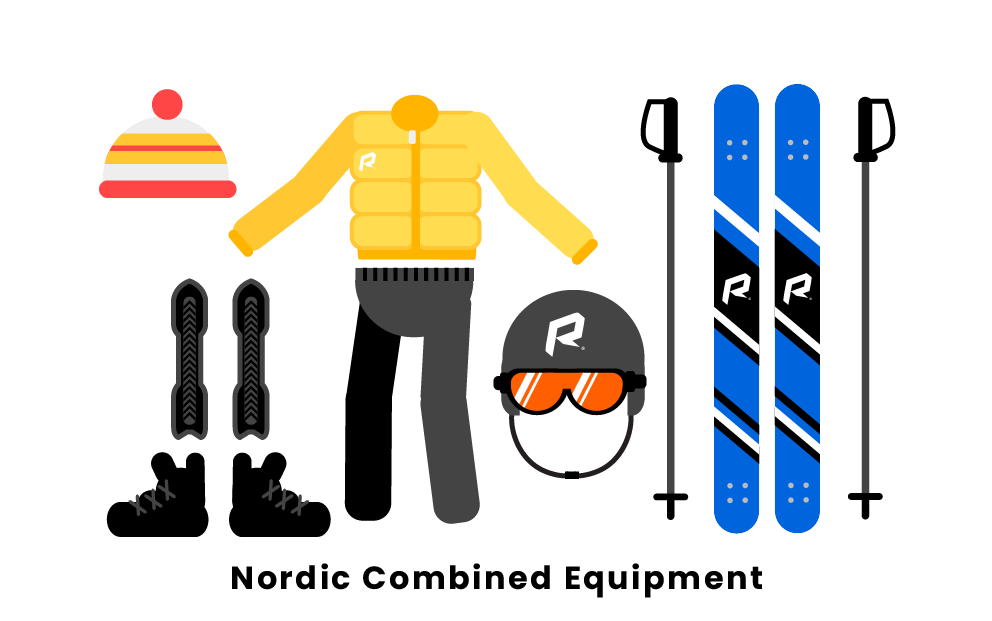 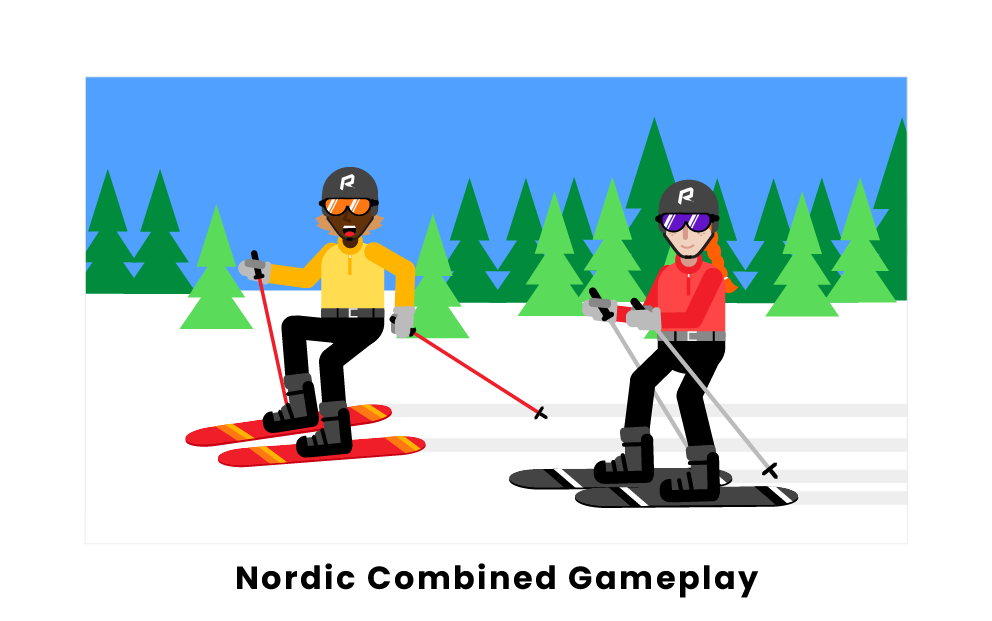 Nordic Combined starts with ski jumping. Competitors take turns jumping, usually one or two jumps depending on the competition. They jump one at a time. As a result of their jump or jumps' distance, competitors get a score.

Following the ski jumping, players get ready for the cross country event. The competitor that had the highest score in ski jumping begins cross country skiing first. Depending on the scores, competitors are released in a staggered manner. Players then work to make up ground and win the race. The player to cross the finish line first wins; it does not matter where they started. 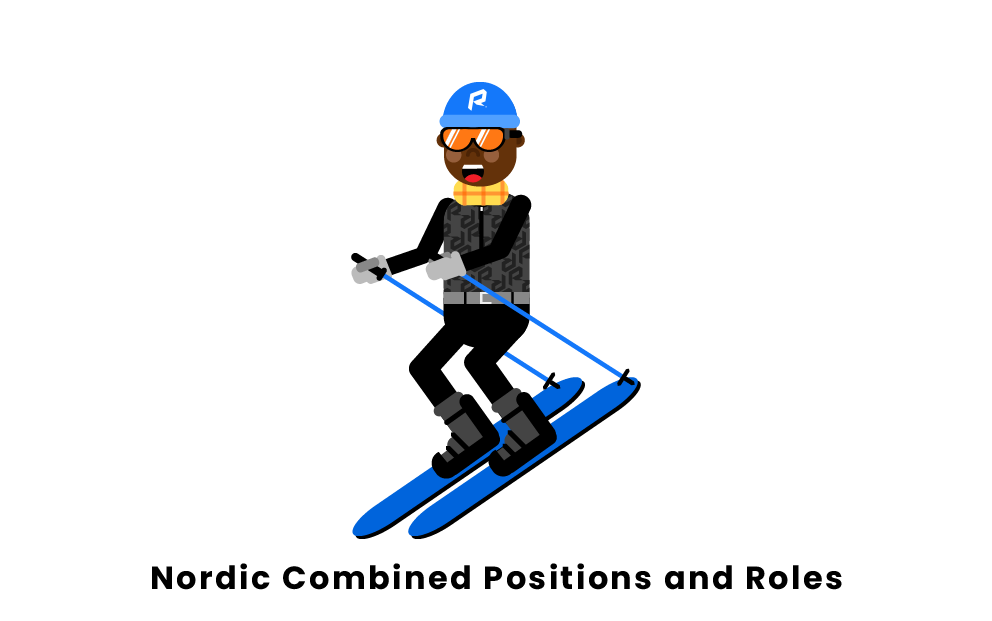 The only real position within Nordic Combined is the competitor. The competitors all have an equal chance at winning the event. The only other position is of the coaches. Coaches line up along the cross country track and instruct their players by giving them advice, time updates, or other information.

The main rule in Nordic Combined is that the ski jump must be done first. All players must begin their jumps from the same distance.

In the cross country portion, a main rule is that you must stay within the boundaries. A player can also be disqualified if they receive unauthorized assistance, for preventing other racers from passing, for not finishing the race on their skis, or for numerous other reasons. 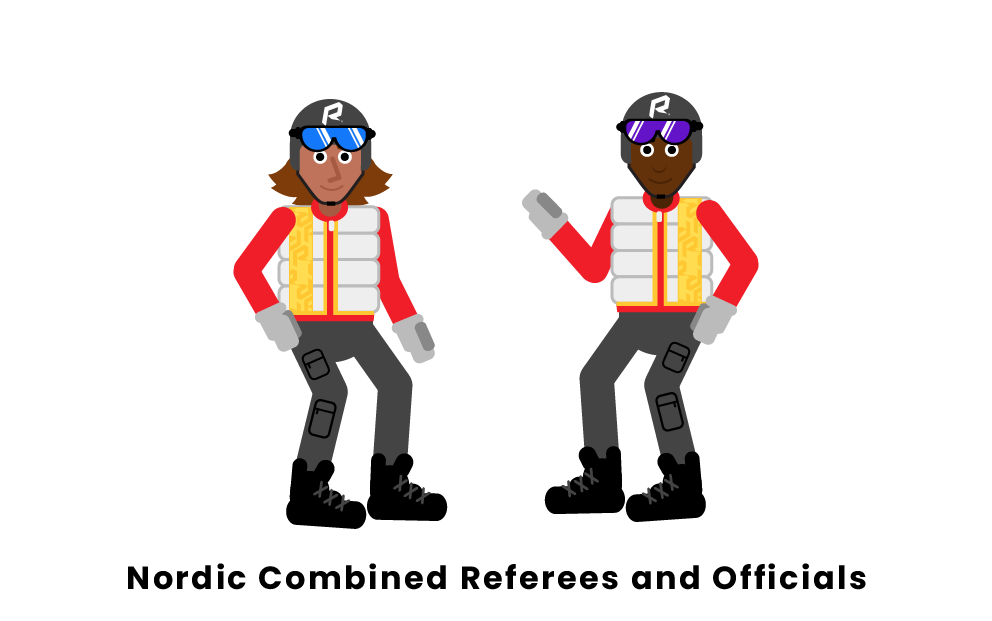 Refereeing and judging ski jumping is a very difficult process. Cameras play a large role in measuring ski jumps. A judge looks at numerous cameras to try and determine the exact location that the competitor touches down. Judges are responsible for awarding points to competitors.

During a cross country race, referees do not play much of a role. The main responsibility they have is to assure there are no disqualifications or breakages in rules throughout the race. 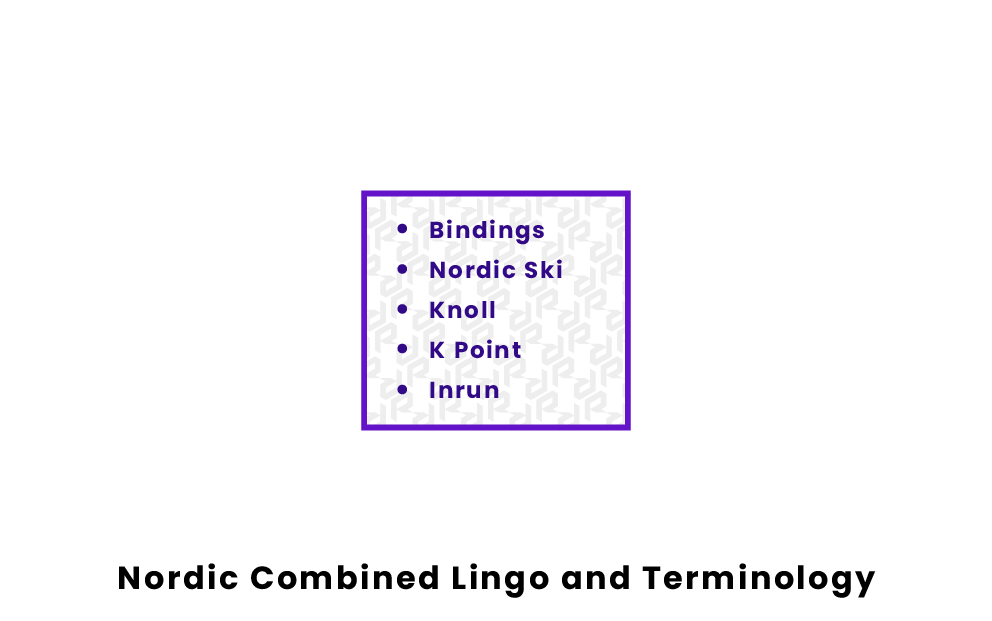 There are many skills needed to participate in this difficult sport. It is important to be versatile and skilled equally in both events. If you specialize in one, you will not be successful in the final placing.

In ski jumping, jumpers use multiple techniques to try and score points. Technical positions need to be held throughout the entire inrun, take off, air time, and landing.

In cross country the main technique is the positioning of the ski. Competitors switch between having their skis parallel to each other and having their skis angled outwards or inwards depending on the particular situation.

A main strategy in the sport is to excel in both areas, ski jumping and cross country skiing.

During competition, ski jumping strategy depends a lot on the conditions outside. Competitors may need to adjust their in-air angles or positioning to fight through wind or other weather conditions.

In cross country skiing, strategy is used throughout the entire race. Competitors are constantly keeping track of their time and pace. They are also looking for opportunities to pass other competitors and the best time to do it. 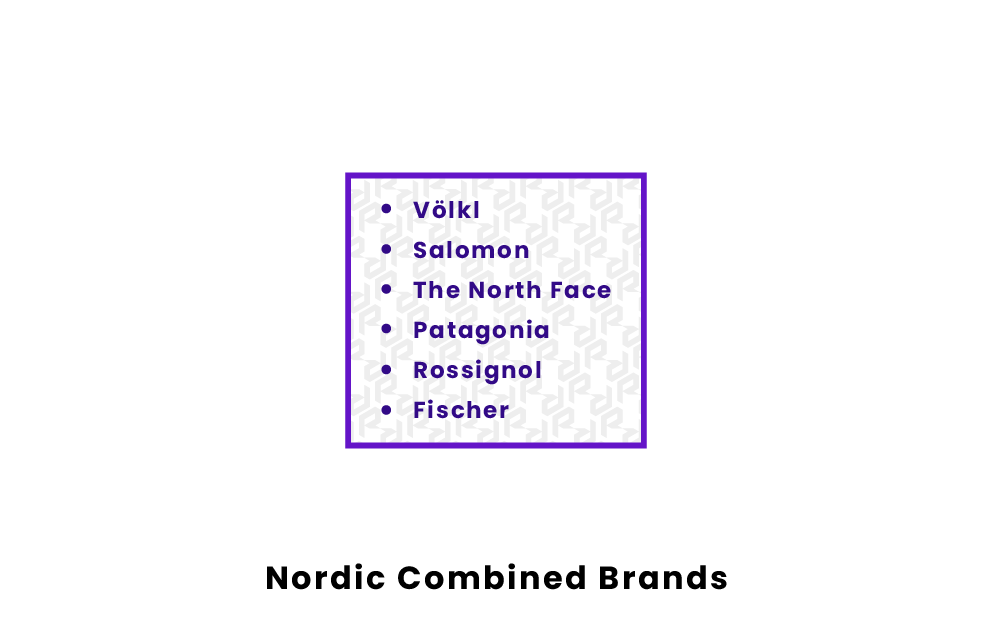 Nordic Combined incorporates brands from both ski jumping and cross country. Ski brands, goggle brands, and ski accessory brands are most common. Here are some top brands for different pieces of equipment.

Nordic Combined athletes often struggle to find longevity in their professional career. This extremely hard and demanding sport can take a toll on the body. As a result, top athletes come in and out fairly quickly.

Athletes do not usually play for a specific team in Nordic Combined. The only teams are national teams representing each country. There are team events in which competitors from the same country work together to score. However, there are not professional teams like in many other sports. Some of the most successful countries in Nordic Combined include Norway, Finland, Austria, and France. 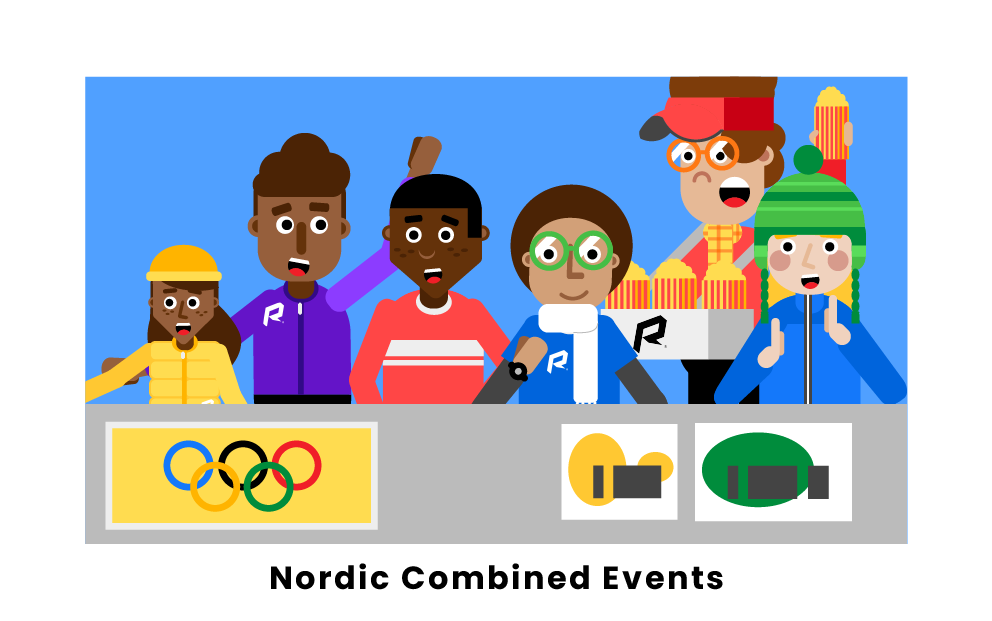 There are many different events within Nordic Combined.

There are many Nordic Combined Tournaments and events throughout the year. The largest tournaments are the Olympic Games, World Ski Championships, World cup, and Continental Cup.

The Winter Olympic Games occur once every four years, and is considered to be the biggest stage for Nordic Combined.

The World Ski Championships take place every other year. This is also a huge tournament.

The World Cup occurs each year and is a year-long tournament. There are events occurring around the world throughout the year. The season lasts from November to March. 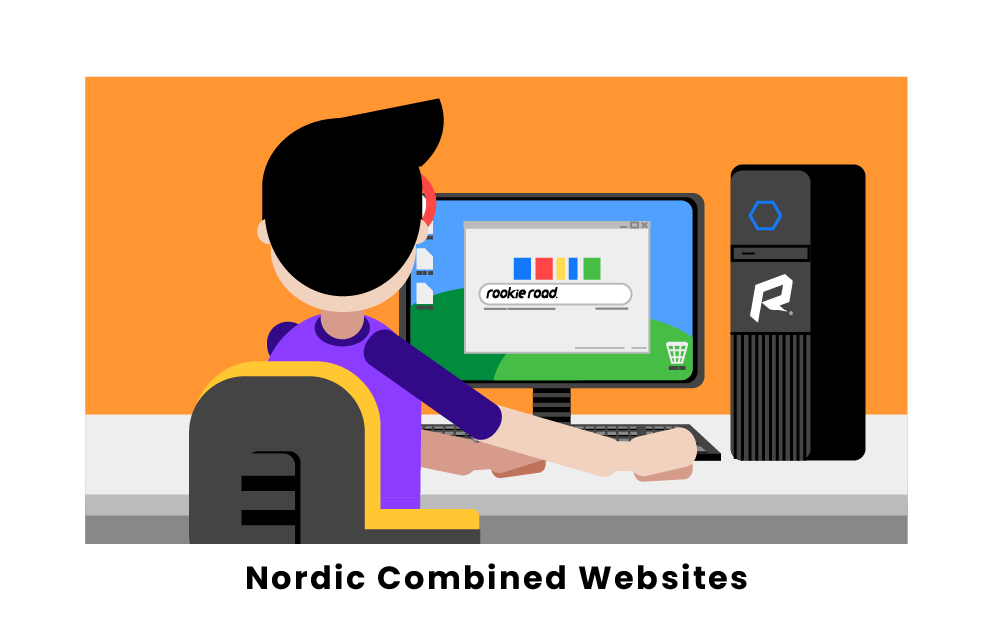 Many countries have their own informational websites about Nordic Combined. Similarly, there are many blogs that allow people with a common interest to be connected. Other websites show current and past standings in different tournaments around the world.

Nordic Combined is a two part sport that incorporates ski jumping and cross country skiing. First, competitors do ski jumping and awarded scores based on the distance of their jump, technique and style. Then, based on their scores they are positioned for the cross country race. The highest score jump starts the race first. The other racers are staggered and allowed to begin based off of their jump score. Whoever crosses the finish line first wins; it does not matter which position or when they started.

What equipment is used for nordic combined?

In Nordci Combined, competitors use equipment for two different sports. They need the appropriate skis, eyewear, head protection, and ski boots for each event. The gear used in each is very specific to the event and cannot be used in the other.

Is Nodic Combined an Olympic sport?

Yes, Nordic Combined has been a sport in the Winter Olympic Games since 1924.

Where is Nodic Combined most popular?

Nordic Combined is most popular in Western and Northern European countries. These countries focus on this sport from a young age. As a result, they have been very successful in professional and Olympic competitions.

Pages Related to What is Nordic Combined?