How Does Scoring Work In Nordic Combined? 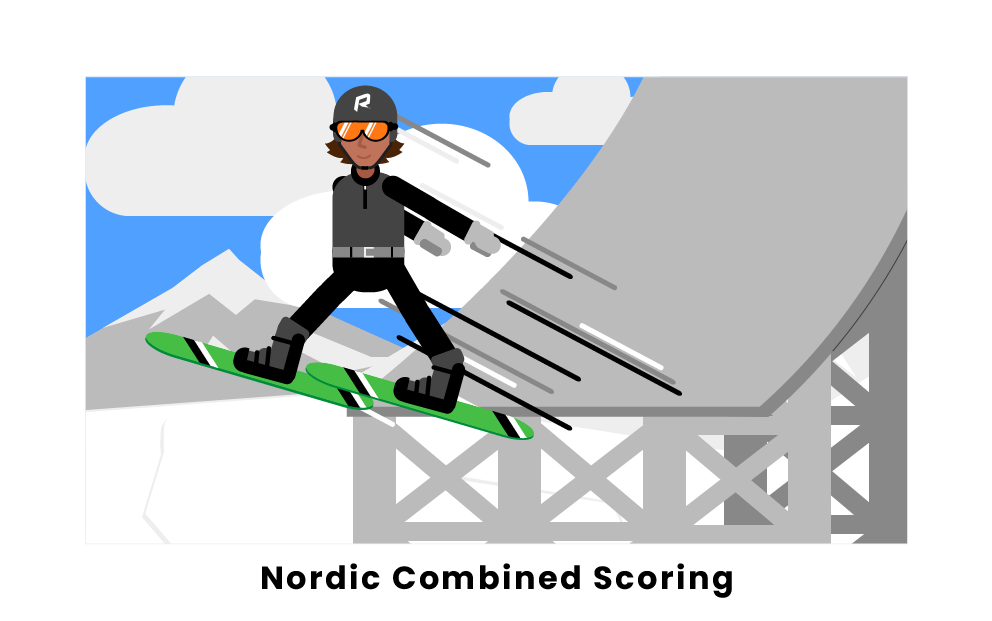 Nordic combined is a sport that combines two facets of skiing: ski jumping and cross-country skiing, into one event. A feature sport in the Winter Olympics, Nordic combined has a unique and complex scoring method. Athletes are first scored on the quality of their ski jumps via a point system, the results are then converted to times to determine their starting places in the cross-country race, which is won by crossing the finish line first. The method used to combine these scores into one overall score is called the Gundersen Method.

In Nordic combined, ski jumping is scored by a points system. Three factors determine overall points: the distance jumped, the style of the jump, and gate and wind compensation points.

Distance points are awarded to each athlete on a scale of 60 and are given out based upon the K-Point, or height, of the hill being jumped from. A jumper who lands on the K-Point of the hill receives 60 points exactly, while jumpers who land over or under the K-Point lose or gain points from 60 based upon how many meters away from the K-Point they landed. Each meter between the K-Point and the landing earns 2 additional points on the normal hill and 1.8 on the large hill. Therefore, if an athlete jumps 100 meters on a K98 hill, they will receive 4 extra points (2 meter-value points x 2 meters past the K-Point) in addition to the base 60 points, for a score of 64.

Style points are awarded on a scale of 0 to 60 and are split into three subcategories, each of which has the potential to gain an athlete 20 points. The three subcategories are flight, landing, and outrun. The flight score judges the quality of the jumper’s movement through the air, focusing on takeoff aggression, use of air pressure, stable positioning, and symmetry. Landing scores are based on elements such as the movement of the head, body, and arms, the smoothness of the landing, and the application of pressure on the legs. Finally, outrun scoring depends upon whether the athlete remains in the telemark position, raises the upper body, and relaxes effectively from their landing. The maximum score an athlete can receive in style points is 60.

Additional points can be added or removed from an athlete’s score based upon external factors, such as the strength and direction of the wind or changes to the starting gate.

Scoring for the cross-country race in Nordic combined is based on athlete’s ski jump performance. The race begins with a staggered start, with the highest-scoring jumper starting first and the others following at intervals based on their performance in the ski jump. This is done using the Gundersen Method.

For the cross-country portion of the Nordic combined, there is no scoring for the race itself, as it is a pursuit race. Therefore, whoever crosses the finish line first wins the competition, even if they had a lower score than other athletes on the ski jump.

The Gundersen Method was created by Gunder Gundersen, a Norwegian who invented a conversion system to determine how ski jumpers in the Nordic combined would be staggered for their cross-country race. The method involves converting each ski jumping point into a set number of seconds.

Invented to remove the confusion over how ski jumpers in Nordic combined should be staggered at the start of the cross-country race, the Gundersen Method allows the number of points scored in the ski jump to be converted to a set number of seconds. This is then used to stagger the athletes in their starts for the cross-country event. The conversion rates for jumping points under the Gundersen Method are as follows.

For the Team Relay event, scores are rounded off, with any score of 0.5 or below rounded down to the nearest second and scores above 0.5 rounded up. Therefore, if a team is only one point behind another team, they will start the race one second later because 1.33 rounds down to one, but if they are two points behind, they will start three seconds later because 2.66 rounds up to three.

What is the scoring system in Nordic combined?

In Nordic combined, the scoring system is based upon two halves of the event, the ski jump and the cross-country race. Ski jumps are scored via a points system, which is split over three categories: distance, style, and gate and wind compensation points. Distance points are based on the K-Point of the hill and are judged on a sliding scale of 60, while style points are earned over three subcategories, each with a potential 20 points. After the ski jump, each athlete’s points are converted to seconds via the Gundersen Method, which determines their starting order for the cross-country race and the time intervals between their starts. Whoever finishes first in the race wins the event.

How does Nordic combined scoring work in the Olympics?

In the Olympics, Nordic combined scoring works the same as in World Cup Nordic combined. First, athletes are judged on the quality of their ski jumps and are given points based on distance, style, and other factors such as wind strength and direction. Then, their scores are converted using the Gundersen Method, giving them each a time-based score that determines in what place they will start the cross-country race. The athlete with the most jump points begins first, after which the other athletes follow behind at intervals based upon their time scores. Whoever crosses the finish line of the cross-country race first wins.

What are the different point categories used in Nordic combined?

There are a number of different point categories used in Nordic combined. Point categories are used to score the ski jumping half of the event and are divided into three main categories: distance, style, and gate and wind compensation. Distance points are judged on a sliding scale of 60, based upon how close athletes get to the K-Point of the hill. Style points are divided into a further three subcategories, with up to 20 points being awarded each in the categories of flight, landing, and outrun performance, for a maximum total of 60 points. Finally, points can be added or subtracted to a jumper’s score based upon the interference of wind or changes to the starting gate.

Pages Related to How Does Scoring Work In Nordic Combined?