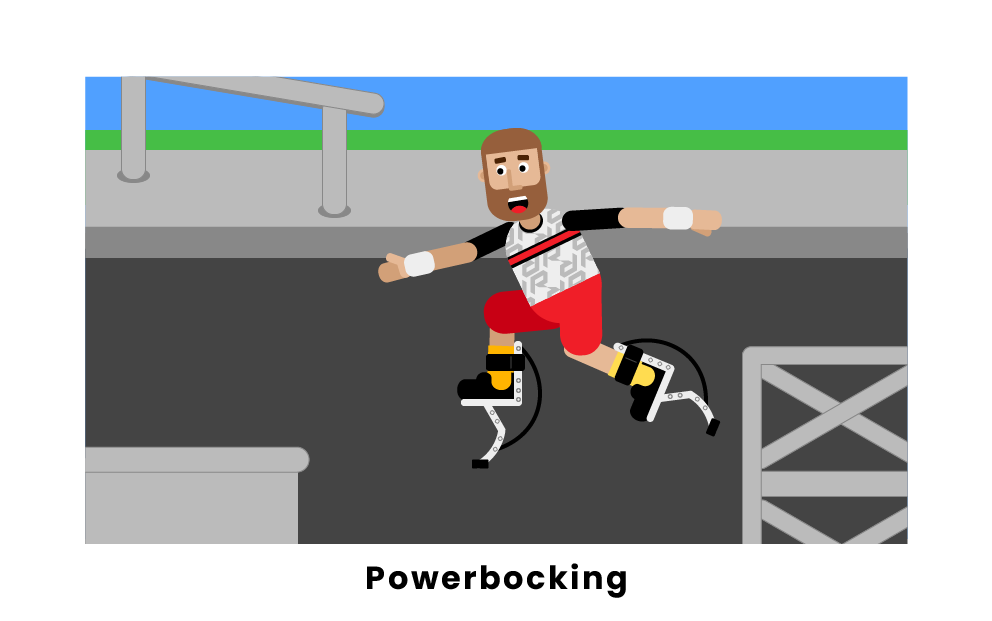 Powerbocking (also called “power-rizing,” “blade running,” and “jump stilting”) is a sport where athletes wear specialized leg attachments known as jump stilts, a form of curved stilt with springs that can allow the wearer to jump to great heights. Jump stilts enhance an athlete’s performance at many tasks, with some claiming that they can increase running speeds up to 30 miles per hour. With jump stilts, powerbockers can perform tricks and flips, jump to great heights, and perform many other varieties of movements.

Powerbocking was invented in 2004 by Alexander Böck, a German inventor who patented the first jump stilts under the brand “powerskip.” The name “powerbocking” is derived from Böck’s last name. Over time, powerbocking has become a popular recreational activity, especially in urban areas such as cities, where there are opportunities for impressive feats, similar to parkour. In order to powerbock safely and correctly, athletes need to be aware of many things, including how their unique weight and body type will affect the springs in their stilts and whether or not their stilts will need maintenance. It is also advisable for powerbockers to wear protective gear such as helmets, elbow pads, and knee pads while performing the sport. Powerbocking is best performed on level, cement surfaces, as grass and dirt can be slippery and may prove difficult for the stilts to gain traction on.

Powerbocking is a sport where athletes wear spring-loaded stilts and use them to jump to great heights and perform tricks. Powerbocking was first invented in 2004 by Alexander Böck, and quickly became a popular urban sport. The jump stilts used in powerbocking allow athletes to perform a wide range of jumps, flips, and bounds. Some people consider powerbocking an extreme sport, but for others it can be a form of exercise, transportation, or even creative expression.

Where are the best places to go powerbocking?

There are many places where one can go powerbocking. Whenever using jumping stilts, it is most important to find an appropriate surface. Due to the small surface area of the stilts themselves and the materials they are made of, powerbocking can be difficult on grass or dirt, much like pogo-sticking, as the stilts may easily slip or get caught on rough terrain. Thus, when powerbocking, it is best to find a smooth, flat surface, such as asphalt or cement. For this reason, powerbocking is popular in urban areas, such as skateparks, as the cement surface is best for the use of jumping stilts. Many urban areas also have natural obstacles to allow powerbockers to perform tricks.

What are the biggest powerbocking competitions?

Pages Related to What is Powerbocking?