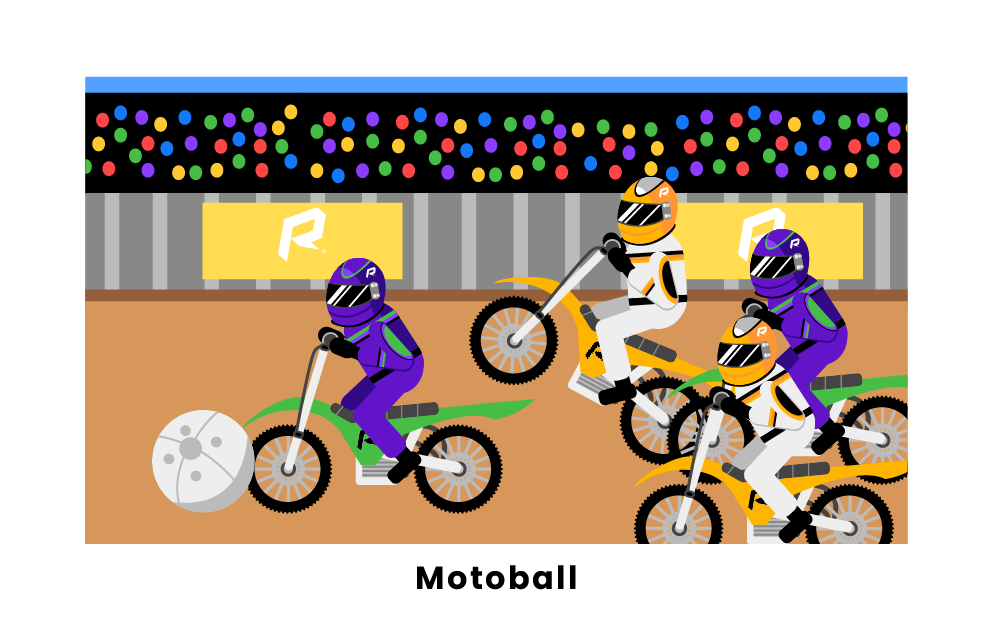 Motoball is a sport that combines soccer and motocross, which creates an extremely exciting and unique product. Motoball consists of two teams of five players, with four players on bikes and the goalie on his feet. Players on bikes can't use their hands or arms in-game, if they do, it's ruled as a foul, and the opposing team is awarded a free kick in return for the misplay. Players can also score using their legs, shooting from behind the designated goalie box. There is no intentional contact allowed between bikes or players, so the game is much safer than people realize. The largest following of motoball is in Europe, specifically in France, England, Germany, and Russia. The bikes players ride during motoball matches can go as fast as 65 km/per hour and are custom-tailored for each athlete's weight and height in Spain.

Motoball is the combination of soccer and motocross, adding completely new elements to two very well-known sports. In a regulation game, two teams of five players square off against each other on a concrete playing field the size of a soccer field. Four of the players ride on bikes, while the goalie stays on their feet. Depending on the federation, games usually have three or four 20 minute periods with ten-minute rest breaks in between each period's completion, along with two utility players always on standby in case of injury.

What is the biggest motoball competition in the world?

Motoball has a particularly strong following in Europe, specifically in France, in large part because of the number of major events the sport holds there. Two of the biggest tournaments in motoball today are the Coupe de France and the Motoball Championship of France. In the 2021 Coupe de France final, MBC Carpentras defeated Suma Troyes 3-0 in Carpentras, France, on September 11th.

What equipment do I need to play motoball safely?

Playing motoball requires specific safety equipment to ensure the athletes competing are all protected. Some of the required equipment includes knee-high boots, knee pads, padded sport bike gloves, padded jackets, and open-faced protective motorcycle helmets, both for the goalie and players on bikes. You also need a specific type of soccer ball and bike to play the game. The ball used for play needs to be 40 cm in diameter, and the bikes used need to be specially prepared two-stroke 250 cc motorcycles with a special frame mounted to the side used to help pinch the ball between the player’s leg and the bike while playing.

Pages Related to What is Motoball?