What is Cluster Ballooning? 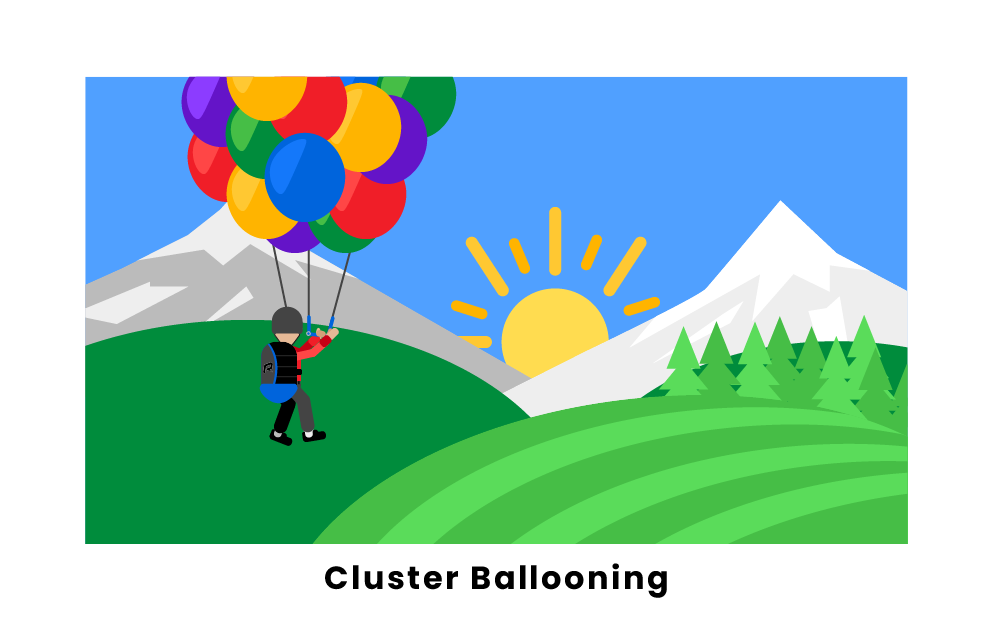 Cluster ballooning is a balloon-flying sport where a single balloonist is attached via harness to a large group (or “cluster”) of helium-filled balloons. Cluster ballooning differs from standard balloon flying in two important ways. Firstly, there is no basket or gondola beneath the balloons, as with hot air balloons, but rather only a seat or harness. Secondly, rather than having vents in the balloons to control altitude, ascent, and descent, the cluster can only be controlled by releasing or deflating balloons or by the use of ballast to weigh down the cluster.

Cluster ballooning was first invented in 1937 by Jean Piccard, a professor of Aerospace Engineering at the University of Minnesota, who used a cluster of 98 latex weather balloons attached to a hot air balloon basket to rise to a height of three kilometers. Over the following years, many other balloonists followed Piccard’s example, using various types of balloon clusters to reach greater heights. A notable example was Larry Walters, who in 1982 used 42 weather balloons attached to a lawn chair to rise what he thought would only be a few meters. Instead, he was lifted over 5,000 meters into the air, and though he managed to land safely, he was fined several thousand dollars by the FAA for not having a license to fly. In June 2008, FAA-licensed pilot Jonathan Trappe performed a similar feat, using cluster balloons attached to an office chair to ascend to a height of 4,500 meters before landing. Trappe also crossed the English Channel with cluster balloons on May 28, 2010.

Cluster ballooning is typically performed in the early morning, as calm morning winds provide the ideal conditions for the sport. A crew of 15 to 20 people is needed to rapidly inflate the balloons, which are sealed with tape and cable ties before being attached to long nylon straps called “risers,” which are then hooked to the balloonist’s harness. The harness, designed for paragliding, has a rear-mounted parachute in case of emergencies.

What is cluster ballooning?

Who is Jonathan Trappe?

Jonathan Trappe is an FAA-licensed pilot who has achieved a number of notable cluster ballooning feats. In June 2008, Trappe used cluster balloons attached to an office chair to rise 15,000 feet into the sky above North Carolina, covering a distance of approximately 50 miles. A few months later, in August 2008, Trappe went on a 10-hour flight over Indiana that reached a height of 17,930 feet. In April 2010, Trappe set the Guinness World Record for the longest cluster balloon flight of 109 miles, which lasted overnight. In May 2010, Trappe flew cluster balloons over the English Channel. He has completed many flights since then.

What equipment do I need to safely go cluster ballooning?

Pages Related to What is Cluster Ballooning?