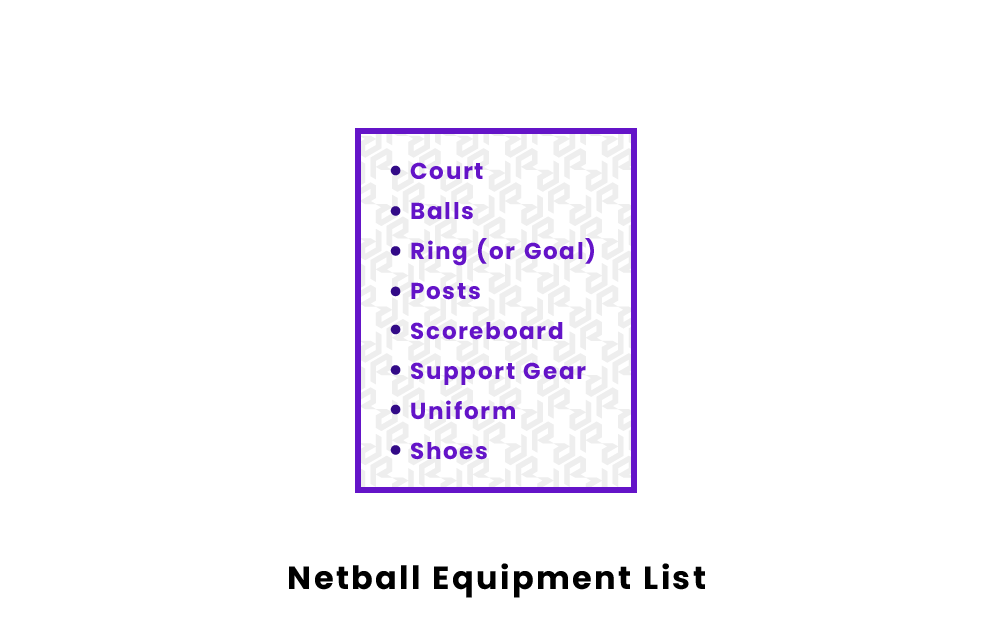 Netball is a fun game played around the world that emphasizes teamwork and strategy. The sport has similarities to basketball, handball, and ultimate frisbee. It is an enticing game for all because males and females can play on the same team, and it is cost effective with minimal equipment. This article will discuss the equipment needed to play Netball properly. 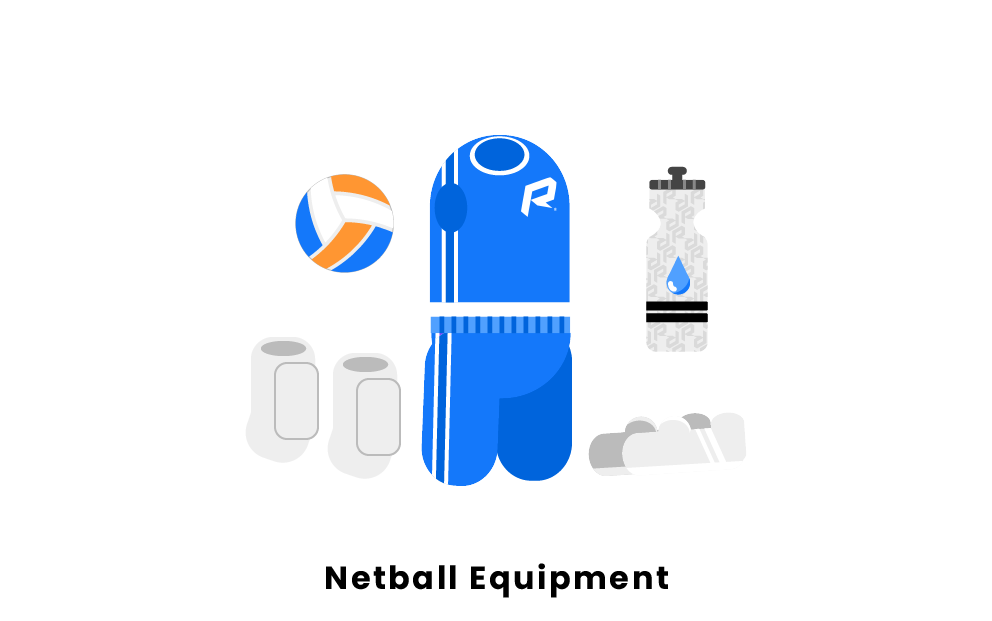 The two most important pieces of equipment needed for Netball are the ball and the goal, which looks like a basketball hoop without a backboard. For a pick-up game, this can be arranged however the players wish. It is important to be on a flat surface (usually a wooden court) with proper attire to maximize player safety. Along with the necessary equipment, there are optional pieces of equipment that can enhance your fun game experience.

Netball is usually played on a wooden court similar to basketball, measuring approximately 30.5 meters (100 feet) x 15.25 meters (50 feet). The court is split into thirds, with the middle being known as the “center third”, and the other two sections containing the nets known as “goal thirds”. In both of these goal thirds, there is a semi-circle known as “the circle” that contains the hoop. If making your own court, it is important to use a flat surface that is safe to run around on. 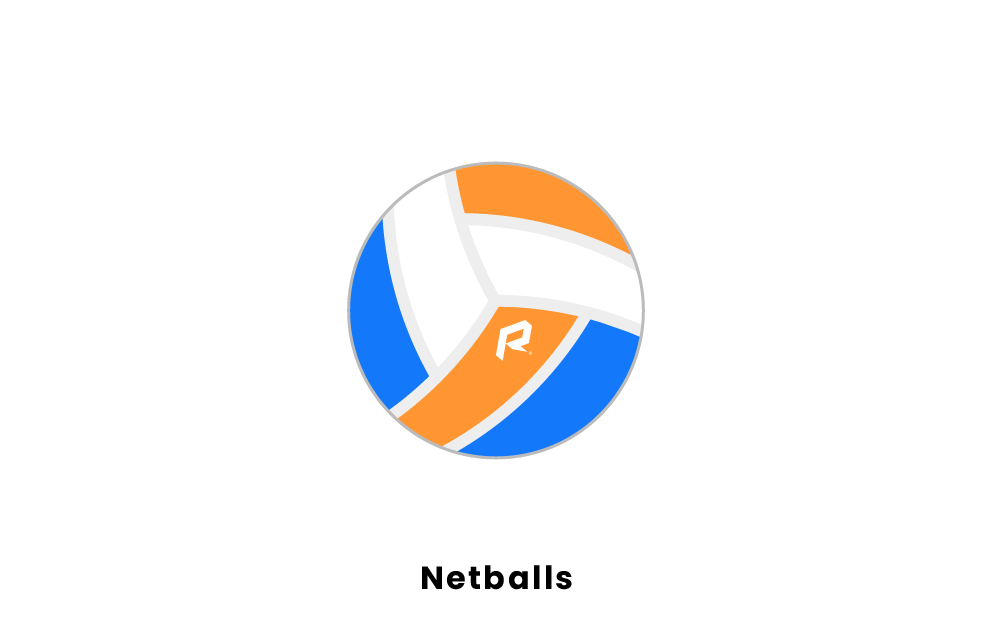 There are different types of netballs used in games based on the rules or preferences. The majority of professional leagues use a ball with a circumference of 27-28 inches and a weight of 14-16 ounces. These balls are typically made of leather or rubber, and look similar to a volleyball. For an official game, it is essential to have multiple netballs in case the one used on the court gets lost or damaged.

The netball “ring” is located on top of the post and looks similar to a basketball hoop. Netball rings have an internal diameter of 15 inches (380 mm) and go out 6 inches (150 mm) from the posts. They are typically made of thick steel rods. The netting color may vary, but it must be easily visible and have a clear opening for the ball to pass through. 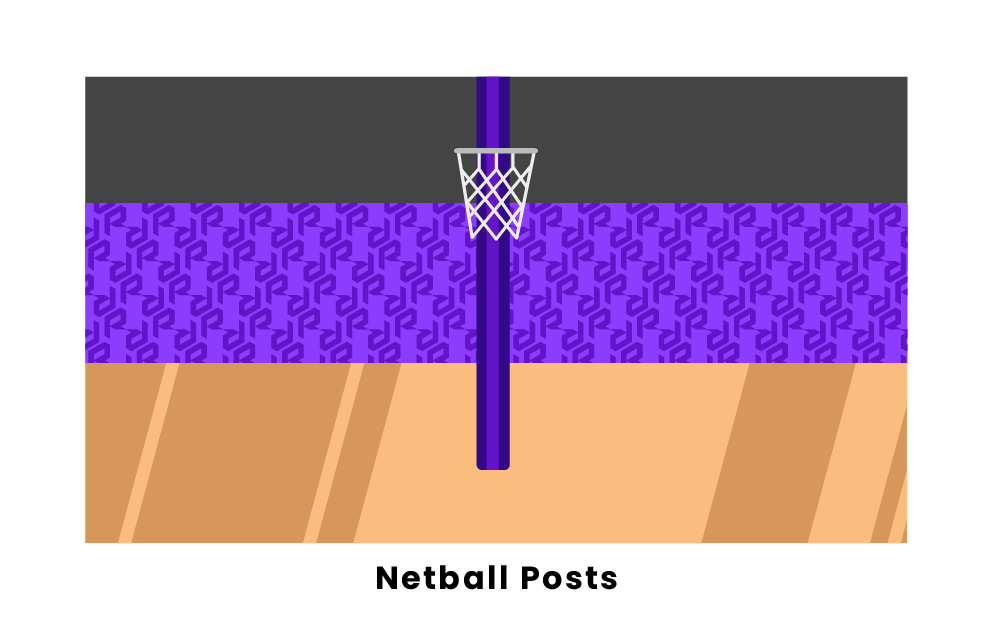 Like basketball, the post height for professional netball is 10 feet (3.05 meters) known as “full height.” For junior level players, the post height is normally set at 9 feet (2.74 meters). It is recommended to buy an adjustable size post for training purposes and accommodate all ages of players. Adjustable posts also allow for easy storage.

A piece of equipment that can help your game of netball run smoothly is a functional scoreboard. This isn’t a mandatory piece of equipment for pick-up/smaller games, but is important for professional or league level games. A netball scoreboard typically has time, period, and score. Due to the running clock and many points scored, the scoreboard is electronic. If one is not accessible, you will need a timer for length of periods as well as someone keeping track of both teams’ points.

Another piece of optional equipment that is recommended for player safety is support gear. Popular gear includes knee or ankle braces/guards to allow for greater stability on the court. Since this is a sport in which footwork is crucial, a lot of stress is exerted on players’ lower legs. Extra support on the legs, along with comfortable shoes, can help a player perform their best. Kinesio tape is also popular among netball players and worn on the shoulders, knees, or ankles.

If playing a pick-up game of netball (with no team affiliation), it is important to wear comfortable clothes that allow for flexibility and movement. For a team game, the uniform rules are a bit more strict. The jersey, known as a kit or bibs, must have the player’s position and name easily visible above the waist on the front and back. Most teams choose to wear bright-colored shirts, polos, or jerseys, with matching shorts or skirts as pants. The common materials worn are made of ultra-mesh, lycra, and micro-mesh, which help air-flow and breathability for the player on the court.

Wearing proper footwear is extremely important for netball. The correct shoe for netball is court-specific and designed to withstand side-to-side and stop-start movements required to play the game. These look similar to running shoes but have special design factors that help improve performance, minimize fatigue and risk of injury. A good netball shoe will have a low heel pitch, cushioned midsole, grip sole, wrapped outsole, and a structured upper. If you’re playing netball on a non-wooden court that has an unusual surface, it is recommended to try playing with different shoes to find what feels most comfortable and durable.