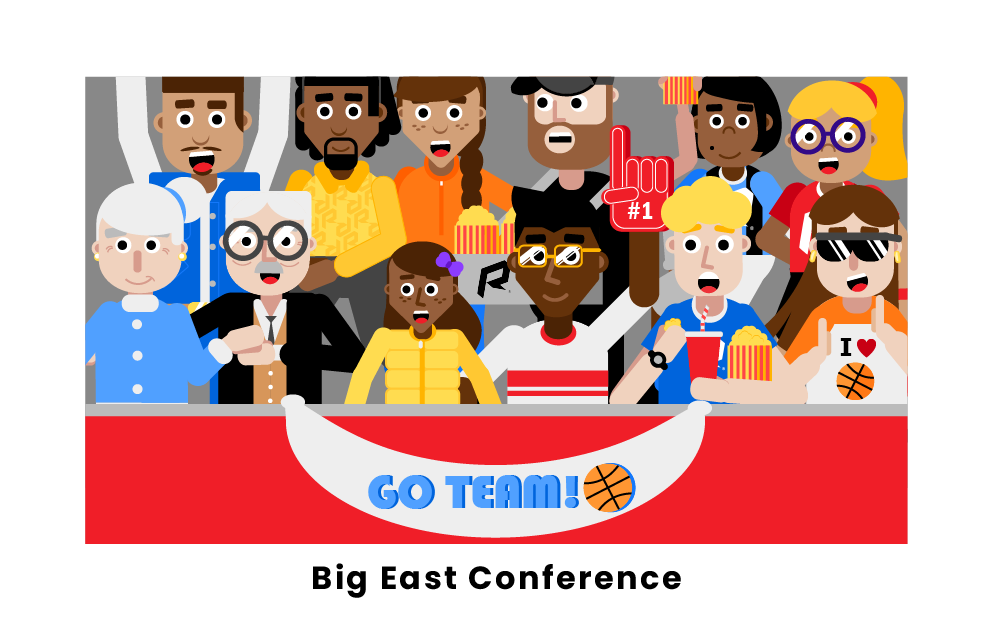 The Big East Conference is a staple of basketball excellence built around a core of hoop-centric Catholic Universities that dominated the Final Four in its 1980s heyday. The conference expanded in the 90s to compete in football but restructured in 2012 into a non-football conference with a renewed focus on basketball.

History of The Big East

The Big East Conference was founded in May of 1979 thanks to the organizing efforts of Dave Gavitt, who was the athletic director and men’s basketball coach at Providence College at the time. Gavitt allied with six other Catholic colleges to form the original Big East Conference, consisting of the following schools: Providence College, St. John's University, Georgetown University, Syracuse University, Seton Hall University, the University of Connecticut, and Boston College. Villanova University joined the conference in 1980, with the University of Pittsburgh added in 1982. Penn State was infamously rejected in its membership bid in 1982, losing by one vote and initiating a rivalry between the school and the conference.

What schools are in the Big East? 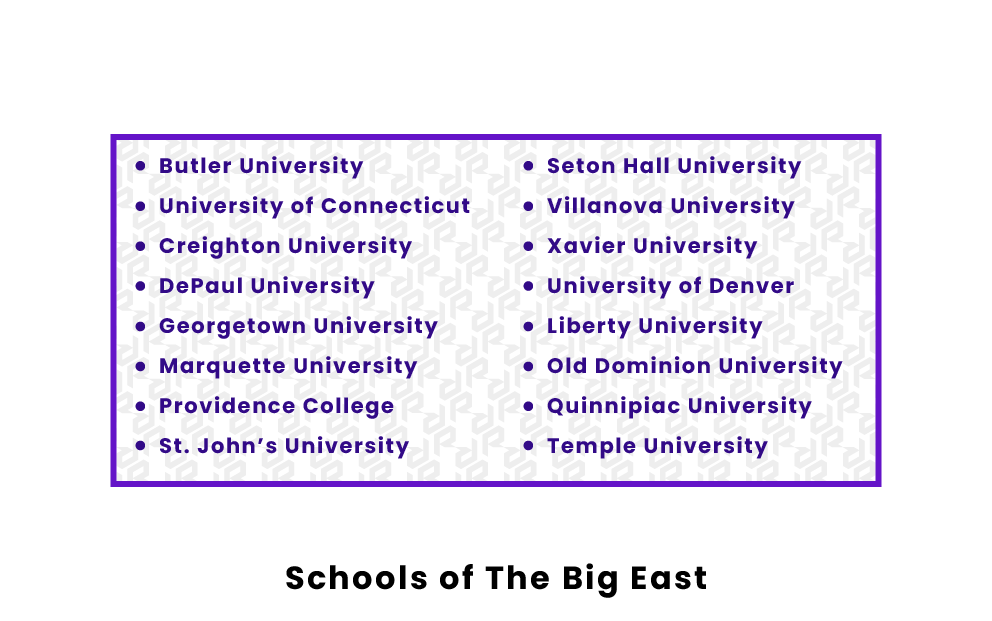 The remaining seven founding schools are DePaul University, Georgetown, Marquette University, Providence, St. John's, Seton Hall, and Villanova. With all these schools being Catholic institutions committed to reclaiming the Big East as a basketball powerhouse, the group became known as the “Catholic Seven.” As part of the founding of the modern Big East, these seven original schools also invited Butler University, Creighton University, and Xavier University to join. All three accepted, forming a 10-team Big East Conference designed to be competitive at basketball.

The University of Connecticut, or UConn, was a member of the original Big East. Still, they joined the American Athletic Conference (AAC) instead of the new Big East following the split in 2012. UConn rejoined the Big East in July 2020, bringing the conference to its current total of 11 full-time members.

What is the Big East?

The Big East is an NCAA Division I non-football athletic conference made up of 11 full-time member schools concentrated in the Northeastern and Midwestern United States. The Big East Conference is known for basketball excellence. The conference was founded in 1979 by seven Catholic universities with the goal of promoting high-level collegiate basketball competition. The Big East was a basketball powerhouse throughout the 1980s. After adding football programs in the 1990s and 2000s, the conference split in 2012. At that time, a new Big East Conference formed around the remaining non-football schools with a renewed emphasis on basketball.

How many teams are in the Big East?

There are 11 full-time schools in the Big East conference, with an additional five schools as affiliate members. The all-sports members are DePaul, Georgetown, Marquette, Providence, St. John's, Seton Hall, Villanova, Butler, Creighton, Xavier, and UConn. Affiliate schools Old Dominion, Temple, Liberty, and Quinnipiac each have a field hockey team. Lastly, the University of Denver has a men’s and women’s lacrosse team. There are 109 women’s teams and 84 men’s teams, representing 12 women’s sports and 10 men’s sports, for a total of 193 teams in the Big East.

What programs left the Big East during realignment?

West Virginia, Pittsburgh, Syracuse, Notre Dame, Louisville, and Rutgers all left the conference during realignments that occurred throughout the NCAA in the early 2010s. The first team to leave the Big East was West Virginia, which departed for the Big 12 in 2012, following the announcement that the “Catholic Seven” intended to split away and form their own non-football conference. Pittsburgh, Syracuse, and Notre Dame departed to the ACC in 2013, as did Louisville in 2014. Rutgers also left in 2014, going to the Big Ten.