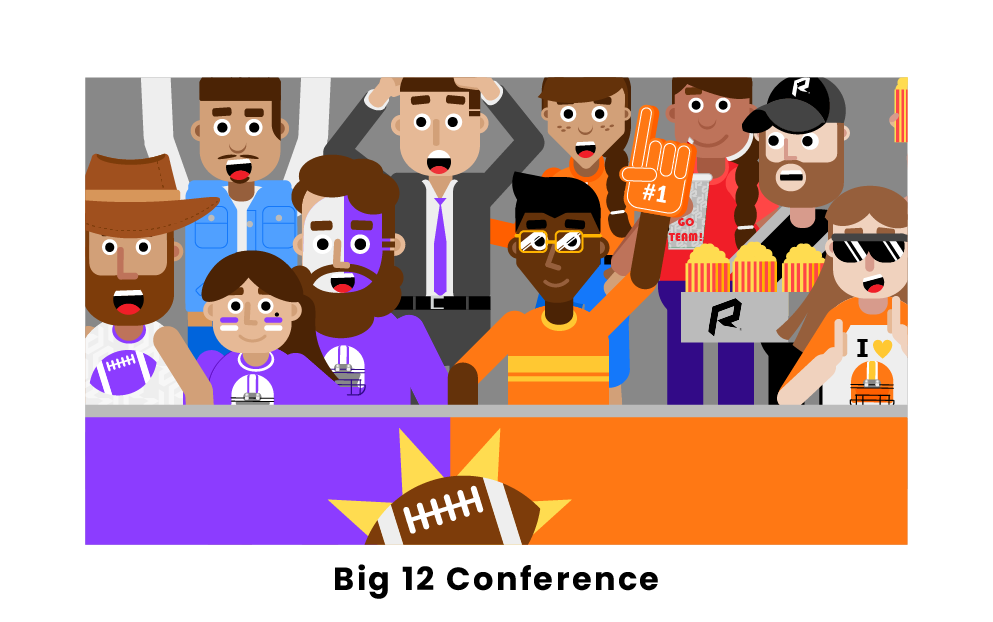 History of The Big 12

Texas Schools from the Southwest Conference

Steve Hatchell, who was previously the commissioner of the Southwest Conference, was the first-ever Big 12 commissioner. Brad Clements and Bo Carter also moved from the Southwest Conference to the Big 12 in executive roles, helping Steve Hatchell. In 1995, Dallas was chosen as the location for the Big 12 headquarters. However, in 2006, the headquarters were relocated to Irving.

What schools are in the Big 12?

When the Big 12 switched from 12 teams to 10 in 2011, the Big 12 removed divisions. Instead, all ten teams are grouped together and play an equal amount of games against each school. In football, teams play each opponent once during the regular season. In basketball, schools play each opponent twice during the regular season. Other sports’ schedules vary, as not all schools participate in all sports.

The Big 12 is an NCAA conference that governs collegiate sporting activities for its member institutions. The conference is based out of Irving, Texas, with ten schools located throughout Texas, West Virginia, Kansas, Oklahoma, and Iowa. The Big 12 is a power five conference, making it one of the top five college football conferences in the country. As one of the top NCAA conferences, the Big 12 has many powerhouses in the world of college sports. Most notably, Baylor University recently won the National Championship for basketball in 2021.

Ironically, the Big 12 currently has only ten teams in it. Originally the Big 12 had 12 teams, as the name suggests. However, schools often shuffle in and out of NCAA conferences, making it difficult for any conference to have a consistent number of schools.

What sports do Big 12 teams participate in?

Big 12 teams participate in many different sports, depending on the school. There are eight men’s sponsored sports in the Big 12: baseball, basketball, cross country, football, golf, swimming and diving, tennis, track and field (indoor and outdoor), and wrestling. Notably, none of the ten schools participate in all ten sports listed. However, there are a few sports that each of the ten schools all participate in: basketball, football, and golf. The least represented sport is swimming & diving, which only has three Big 12 schools.