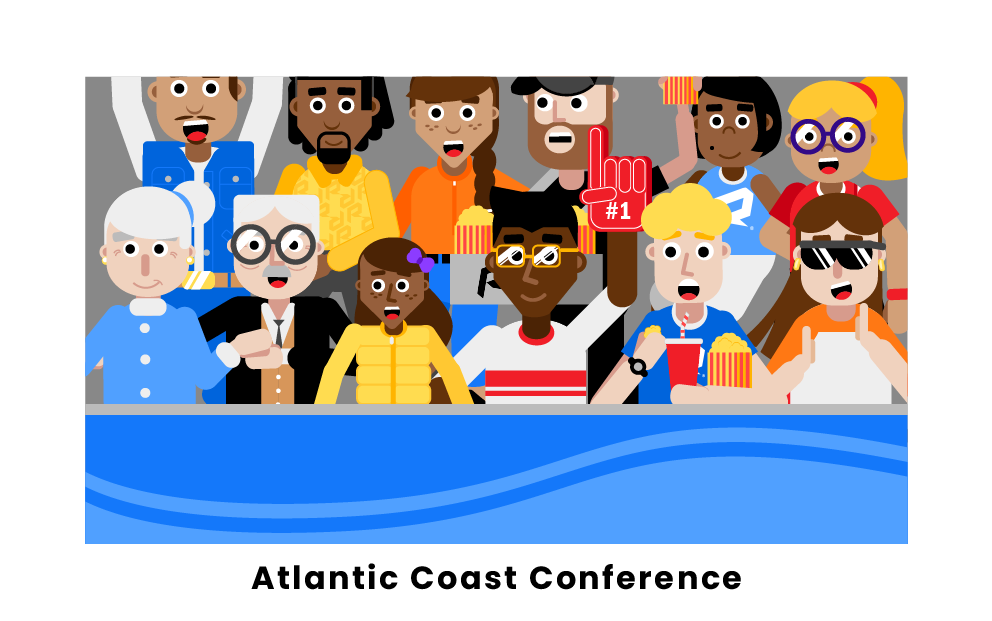 A giant of athletic and academic excellence, the Atlantic Coast Conference, or ACC, is a 15-school Division I FBS conference that spans the eastern US and part of the midwest. The ACC is a “Power Five” conference in football; its teams are also known for sustained dominance in baseball, basketball, volleyball, and soccer.

History of The ACC

The ACC was founded on June 14, 1953, when seven former members of the Southern Conference ratified the bylaws of their new conference. Just the previous month, the seven founding schools–Clemson, Duke, Maryland, North Carolina, North Carolina State, South Carolina, and Wake Forest–had announced their intention to leave the Southern Conference. This was in part because of the conference’s restrictive ban on postseason football. The charter schools sought an eighth member, and Virginia was added in December of the same year.

The first change to the ACC’s lineup came in 1971 when South Carolina left. Georgia Tech joined the conference in 1979, adding their football program in 1983. Florida State joined in 1991. Miami, Virginia Tech, and Boston College were added during the 2005 NCAA conference realignment, bringing the total to 12. Notre Dame, Pittsburgh, and Syracuse joined the ACC in 2013. The following year Louisville was added and Maryland left, marking the most recent changes to the conference.

What schools are in the ACC?

Headquartered in Greensboro, North Carolina, the Atlantic Coast Conference (ACC) is made up of fifteen member schools which are spread throughout the eastern and midwestern US. The ACC spans ten states, including Massachusetts, New York, Pennsylvania, Indiana, Virginia, Kentucky, North Carolina, South Carolina, Georgia, and Florida.

In football and baseball competitions, the conference is divided into the Atlantic Division and the Coastal Division. These divisions are not determined by geography, and the ACC functions as a single division in all other sports. The schools in the Atlantic Division are Boston College, Clemson, Florida State, Louisville, North Carolina State, Notre Dame, Syracuse, and Wake Forest. The Coastal Division schools are Duke, Georgia Tech, Miami, North Carolina, Pittsburgh, Virginia, and Virginia Tech. Notre Dame competes as an independent institution in football; Syracuse does not sponsor a varsity baseball team. Thus, the Atlantic and Coastal Divisions each have seven teams for both football and baseball competition.

The ACC is a “Power Five” member of the NCAA Division I Football Bowl Subdivision (FBS), which means that the conference championship winner is guaranteed a spot playing in one of the six bowl games played on New Year’s Day. The ACC requires full-member schools to sponsor teams in football, men's basketball, women's basketball, and either women's volleyball or women's soccer. In addition, all ACC schools field a minimum of 16 varsity sports, to meet the NCAA’s requirements for FBS colleges. A total of 14 women’s sports and 13 men’s sports are sponsored by the ACC, with fencing as the most recent addition in 2014.

What is the ACC?

The ACC is an NCAA Division I athletic conference with member schools spread across the eastern and midwestern US. Known for excellence in basketball, baseball, and football, the ACC is a “Power Five” member of the Football Bowl Subdivision (FBS). In addition to athletic prowess, ACC member schools are known for quality research programs and strong academics. The ACC is recognized as having the highest academically-rated schools among all of the Division I FBS conferences.

How many teams are in the ACC?

There are 15 schools in the ACC. In football and baseball, the conference is divided into the Atlantic Division and the Coastal Division. Each of the two divisions has seven teams, as Notre Dame is an independent in football and Syracuse does not have a baseball team, and both of those schools are in the Atlantic Division. For other sports, the conference is one single division, with between four and 15 teams being fielded, depending on the sport. Across fourteen women’s and thirteen men’s sports, a total of 320 teams are sponsored by the ACC.

What does ACC stand for?

ACC stands for the Atlantic Coast Conference. The ACC is an NCAA Division I athletic conference with most of its member schools located in states along the eastern Atlantic coast of the US, which gives the conference its name. Along the Atlantic coast, the ACC extends from Syracuse University in the north to the University of Miami in the south. The only two ACC schools not located in coastal states are Louisville in Kentucky and Notre Dame in Indiana.