Why Do NASCAR Races Not Happen In The Rain? 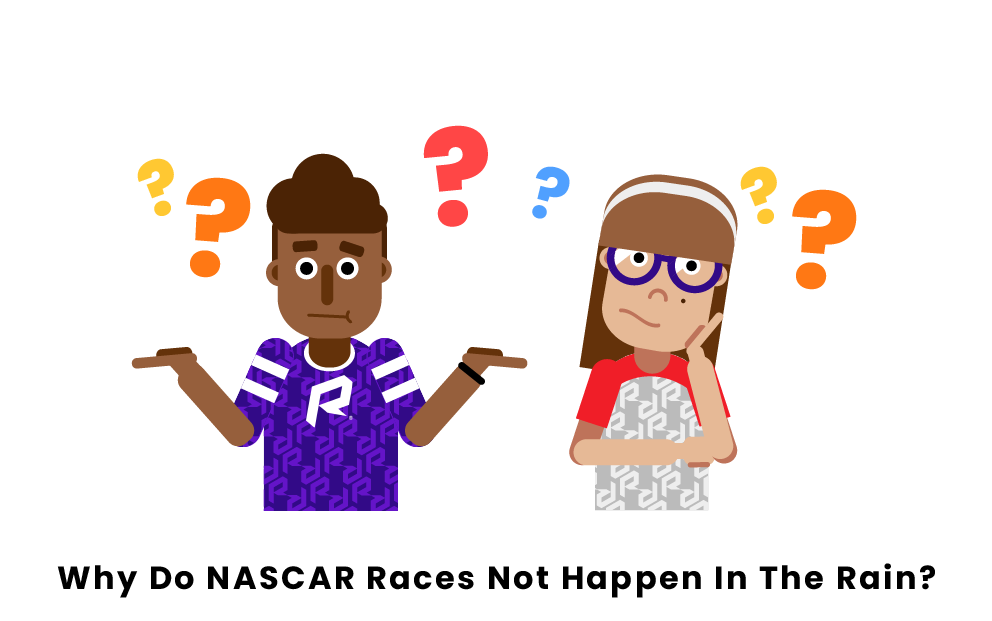 There are many reasons as to why NASCAR races do not happen in the rain. The most important reason is that in the rain, the weather can put drivers in very dangerous situations when driving. In addition, most NASCAR tracks and stadiums are outdoors, so rain delays are always likely. The fans of NASCAR are also a big reason as to why races never happen in the rain. Seeing a NASCAR race occur in the rain is a rare sight in the sport.

Tires on normal commuting cars have what are called “tread,” which are grooves in tires that move water away from the tire as the car or vehicle is in motion. When these tires are worn down, the tread on tires also get worn down, which can result in what is known as hydroplaning. Hydroplaning is very dangerous as the driver loses control of the car on the road.

NASCAR tires, on the other hand, are completely smooth with no tread. They are very different from regular car tires. This is because NASCAR drivers want the most traction and most contact with the race track at all times. Good traction is needed because NASCAR cars are going at high speeds of up to 200 miles per hour, and tires need to be able to handle the speed and force that is being put on them. While NASCAR and its racers do have tires to be used in rain, they are rarely used in an actual race. There have been only a few races in which NASCAR raced in the rain.

If NASCAR races happened regularly in the rain, there would be many risks involved. In addition to drivers losing control of their race car, the visibility for the drivers is greatly reduced in bad weather. Lots of rain can result in it being hard to see the race track in front of them. With limited visibility, it increases the likelihood that drivers crash into each other and on the boundaries of the race track. As a result, NASCAR does not often race during bad, rainy weather, especially when it limits visibility for the participating drivers because it is extremely dangerous.

There have been other racing sports that have raced in the rain, and the results are dangerous. For example, Formula 1 has had many races in the rain and drivers are responsible for changing their tires. While Formula One does not race in lots of rain, a little rain does not stop them from racing. In past races, these races have become dangerous and have increased the likelihood of crashes during races.

NASCAR is a sport that is highly based off of its fans and its traditions that date back to the early eras of the sport. In short, fans are an essential part of the sport. NASCAR races are attended by hundreds of fans throughout the season. Tailgating and meeting up with friends and family outside of the race track is a big aspect and characteristic of the sport. Drivers also depend on fan engagement for performance. When the fans are in the stands and engaged, the races are more exciting for everyone involved.

Like any other company, NASCAR depends greatly on ticket and merchandise sales in addition to fan participation. So it is no surprise that they want races to be held on time and in nice, sunny weather. If NASCAR were to race in the rain, it would discourage fans from showing up to races and buying tickets in advance. In other words, NASCAR wants people to buy tickets, attend games and buy merchandise, and it is impossible to do so in inclement weather.

Most race tracks and stadiums for NASCAR are outdoors. Most stands for fans are open and outdoors. As a result, there is little covering for attendees and race employees to take cover in bad weather.

In addition, NASCAR is an organization heavily based on tradition. The tradition of gathering outdoors and attending NASCAR races is big in the NASCAR community. With rain and rain delays, that puts the NASCAR condition at risk and stops people from attending games.

What tires are used in NASCAR?

Tires that are used in NASCAR are very different from regular car tires. More specifically, regular car tires have ridges called ‘tread’ that help cars avoid slipping in rainy, wet weather on the road. NASCAR tires do not have tread and are smooth in order to have the best traction on the race track. Specifically, NASCAR tires are sponsored by Goodyear and are called radial tires. This is a reason as to why NASCAR does not race in the rain often.

What is the best weather for a NASCAR race?

Weather plays a big factor in NASCAR, and clear skies are a big part of the sport. The sport season is typically in the spring and summer months, so nice weather is usually the norm. While the sport can be played in chilly weather, the most ideal weather is sunny, clear skies as it makes way for the most optimal race environment. Not only are racers able to drive best in this weather, but more fans are able to come out and support their favorite racers.

How often do rain delays happen in NASCAR?

Rain delays are very common in NASCAR. This is because NASCAR does not host races in the rain, so oftentimes bad weather means a delay of the start of the race. If the rain continues throughout the entire day, a race can be delayed by many hours and potentially the race is suspended until the following day. In fact, in 2020, rain interrupted about 60 percent of NASCAR races.

How often do crashes happen in NASCAR?

NASCAR crashes are fairly common. Car collisions and crashes are probably one of the most well known aspects of the sport. While many are not deadly, there have many instances in which races were. In a single NASCAR season, there are about 220 crashes per year. However, new safety regulations and addition to the NASCAR vehicles has made crashes safer and has reduced them significantly.

Pages Related to Why Do NASCAR Races Not Happen In The Rain?