Why Do NASCAR Racers Drive Counter-Clockwise? 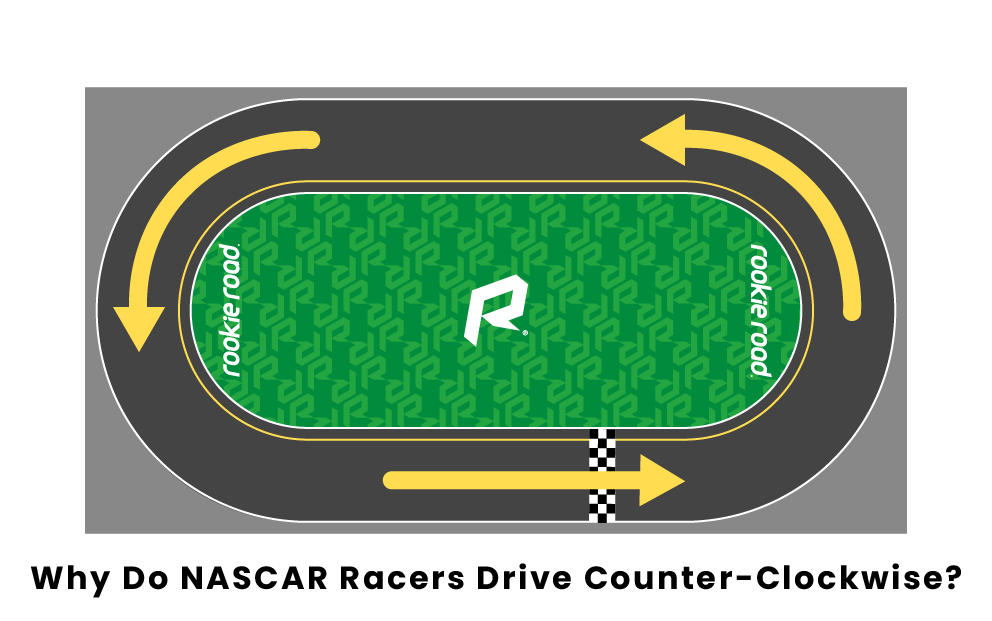 NASCAR always goes counter-clockwise. In every single NASCAR race, every driver is always making left turn after left turn, always turning to the left. The perpetual counter-clockwise racing begs the question: why?

The short answer to that question is that there is no definite answer. However, there are many different theories, including:

Other Sports Do It

The simplest answer to the question "Why do NASCAR racers drive counter-clockwise" is that every other sport runs in that direction, so why shouldn't NASCAR? In the United States, practically every major sport tends to run in one direction: counter-clockwise. Baseball runners sprint from home to first base to second base and around the diamond counterclockwise. Track and field athletes sprint and hurdle their way across the track counterclockwise.

The main line of thought is that nobody knows exactly when sports started going counter-clockwise, they just did. And when automobile racing and eventually NASCAR started becoming popular, it followed suit.

It's Tradition: Dating Back to Horse Races

The first well-accepted date of oval automobile racing in the United States was in 1896 at Narragansett Trotting Park: a dirt horse racing oval in Cranston, Rhode Island. Seven cars (some with electric, some with internal combustion engines) entered the race and the winner had an average speed of only 20 miles per hour. The track at Narragansett went counter-clockwise, and so naturally, so did the automobile race. As races kept happening, they kept driving counter-clockwise, and just like that, a tradition was born.

But it's quite not as simple as that. While horse tracks in the United States always go counter-clockwise, the same can't be said of English horse tracks. In England, many tracks actually run clockwise.

It Gives an Advantage to Righties and Looks Better!

Almost everybody on planet earth reads time from left-to-right. For example, 10:30 is read as ten-thirty, not thirty-ten. This means that a race going counter-clockwise has its athletes passing the fans like words on a page: from left to right.

It's also believed that track races are run counter-clockwise because it's easier for right-handed people to run in that direction. Biomechanically, a right-handed person has an easier time producing force when turning left - pushing off with their left foot and using their right arm as a counter-balancing weight. In a world where a majority of people are right-handed, it seems only naturally that tracks would be built with right-handers in mind.

It's Safer and Easier

Maybe the firmest answer is that left turns are simply safer for drivers - at least in the United States of America. In American cars, the steering wheel and driver's seat are on the left side of the car. If a driver were to crash into the retaining wall on the outside of the track, which can happen often in NASCAR, almost the entire vehicle will impact the wall before they do. Not to mention, there's more track standing between driver and wall on turns.

The addition of massively banked tracks, like at Daytona in 1959, only added to these advantages to left-hand-turns. Banked turns make driving to the left even easier than before, and it requires even greater momentum to crash into the right side of a turn if a driver is turning left. Turning left can end up saving a driver's life in the event of a crash.

In addition, a driver turning left has a much better view of the track below them than a driver turning right, because the right-hand side of the car is farther away from the driver's eye than the left side is. Having to rotate their heads less makes turning to the left much easier for NASCAR drivers, and much safer.

Pages Related to Why Do NASCAR Racers Drive Counter-Clockwise?