Why Do NASCAR Drivers Swerve Before The Race? 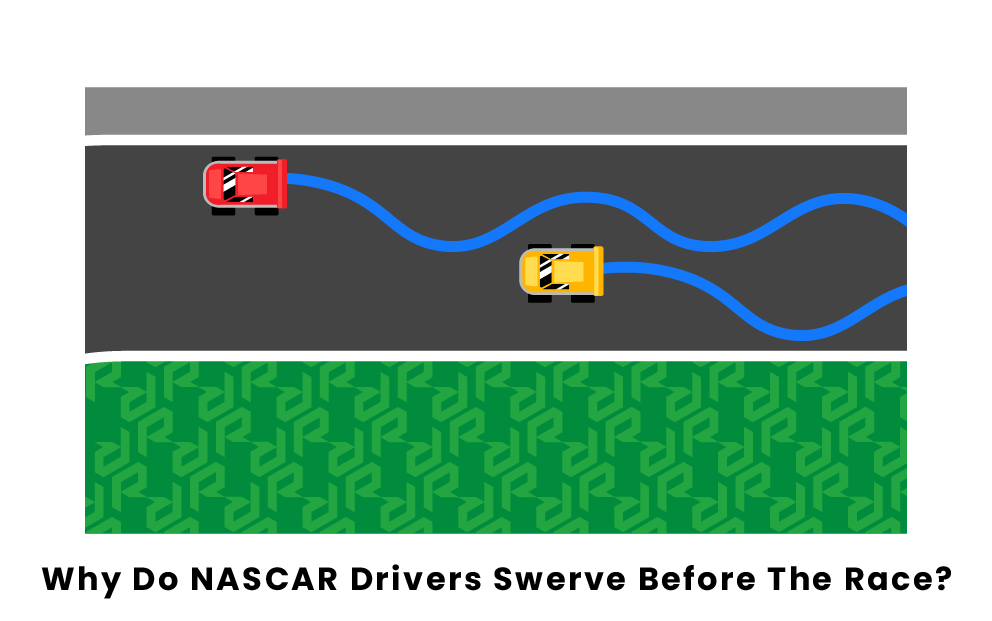 Have you ever noticed that before races and during cautions, NASCAR drivers sometimes make swerving, zig-zag movements? They don't follow the regular racing line, instead, going left and right constantly, which seems odd for a racing driver who is trying to be fast. It is also intriguing that drivers don't do it all the time, but just during specific moments of the race. And adding to this weird display, typically, all of the drivers swerve at the same time! This is definitely odd behavior at first glance, but it absolutely has a purpose, and below, we will examine what that purpose is!

What is Swerving in NASCAR?

The truth about the back-and-forth motions made by NASCAR drivers before a race or restart is that they are swerving. Swerving is a tactic drivers use when preparing their cars and tires for a race start or restart after a safety car. Swerving is a very important thing to do that not only applies to NASCAR but to all different motor racing categories. You'll see Formula 1 drivers doing the same thing with their cars before the race restart or when following the safety car. Although it does look quite weird for someone who is not very familiar with the sport, it is quite common, and there is a very logical explanation behind it. In fact, there are two reasons why NASCAR drivers swerve before a race: raising the tire temperature and clearing marbles (pieces of rubber) from their tires.

NASCAR drivers swerve before the race and during safety car situations in order to keep their tires warmed to an ideal temperature, something not possible at the lower speeds at which cars drive in those situations. Warm tires have more grip than cold tires, which naturally makes the car faster and easier to drive. In addition to swerving for the tires, drivers are steering and braking. These techniques raise the tire temperature, but it also warms up the brakes, an important part of the car during the race.

While other motorsport categories have tire warmers and other techniques to warm up tires before a race starts, NASCAR doesn't make use of such things, as they don't want any drivers to have any advantages for artificial reasons. That only makes it more important for NASCAR drivers to swerve before the race.

The other big reason why drivers swerve is because of marbles, which are little rubber pieces that come out of the tires as they get worn out during the race. Keep in mind that NASCAR tires are not the same as tires used in regular road cars. NASCAR tires are made of elastomers, a rubber compound. As drivers race and the tires get heated, their chemical composition changes, which causes molecules to realign and marbles to form. Marbles are common in all forms of motorsports. They are simply a sign of tire wear, and while different tracks may have different types of marbles or different levels of them, it is certain that they will be there. It is quite easy to spot the marbles on the track during a race: whether you're watching the race on TV or live, you'll notice little black spots around the track.

Marbles get their name because driving over them is like driving over real marbles. They are really slippery, which can slow drivers down, and even cause an accident. Drivers swerve to clean marbles off their tires so that when the race starts or restarts, they don't drive over a slippery surface.  The longer cars have been racing, the more marbles there will be on the track, and thus the more careful drivers have to be. In addition to that, colder tires are stickier than hot tires. Therefore, maintaining ideal tire temperature also keeps tires from picking up more marbles than they would if it were cold.

Overall, swerving is a simple but important technique in NASCAR. It not only keeps tires warm and thus improves the handling, but it also cleans marbles off of tires and thus makes it safer for drivers to race. It would be impossible to have race starts and restarts as fast as the ones today without swerving.

Who supplies tires for NASCAR?

The Ohio-based company Goodyear is the official tire supplier for NASCAR, and it has been so since 1997. Goodyear provides all NASCAR teams in its premier categories with their tires for all races. The reason to have only a single tire supplier in the category is to make the playing field leveled, keeping richer teams from dominating the sport. Goodyear's tire engineers work every year to come up with the best and safest possible product to provide NASCAR teams.

Are all NASCAR tires the same?

Not all NASCAR tires are the same; in fact, they are quite different from each other. Goodyear tire engineers create a new and different tire for every single race, taking into consideration each circuit's characteristics. Tires are made of different compounds and chemical components. NASCAR teams will have between nine and 14 sets of tires for a race weekend, and how many they will use depends on the type of circuit (street circuit, speedway, superspeedway, or short track), and the length of the race.

Does NASCAR have wet tires?

NASCAR does have wet tires, but they are almost never used. While other categories, such as Formula 1 and the 24 Hours of Le Mans, do race in wet conditions, NASCAR tries to avoid it, as the risks increase drastically for stock cars. NASCAR cars usually race on what is called slick tires. Those tires don't have any treads, which increases the surface that is in contact with the track. However, in the rain, slick tires are extremely slippery. Therefore, rain tires have treads in them and are safe to be used in the rain. Nonetheless, other increased risks make NASCAR suspend races in case of rain most of the time rather than racing in wet conditions.

How much does each NASCAR tire cost?

NASCAR tires cost around $400 each. All NASCAR teams have the same number of tires per race weekend, and as we saw earlier, that number varies between 9 and 14 sets of tires. Taking all that in consideration, buying new tires for your own car doesn't sound that expensive anymore, does it? On average, a team can expect to spend around $20,000 on tires per race. NASCAR follows a system where teams don't buy tires from the supplier, but rather lease them.

Pages Related to Why Do NASCAR Drivers Swerve Before The Race?