Why Do NASCAR Cars Only Turn In One Direction? 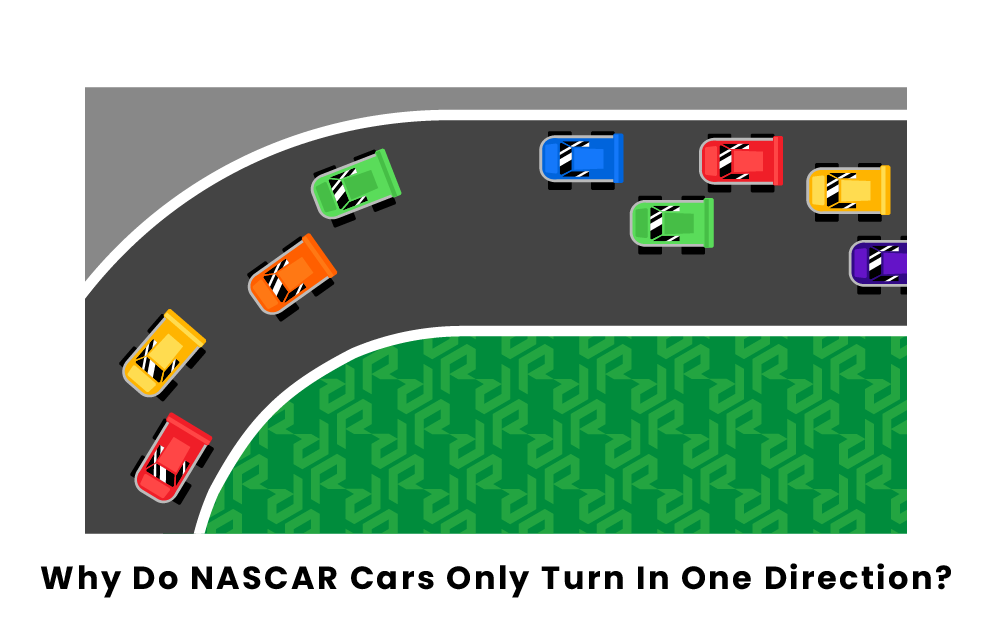 For outside observers, the question “why do NASCAR cars only turn left?” comes up frequently. Some have comically speculated whether NASCAR race cars are able to turn right. Of course, NASCAR cars can turn in either direction, just like a regular car. However, a few questions still arise from NASCAR’s unique racing style: Why do they only turn left? Do any races feature tracks or speedways with turns in both directions? How did NASCAR come to adopt this racing format?

Why Does NASCAR Only Turn Left?

NASCAR cars only turn left in the interest of increasing driver safety and following tradition. Left turns are safer for a left-seated driver. Horse races and track and field races were traditionally run counterclockwise, leading NASCAR to follow suit.

Interestingly, counterclockwise racing originated before NASCAR was founded. Dating to the late 1800s, it informed the style of early horse racing in America. Historians believe that NASCAR’s racing format follows the tradition of early American motor racing. The format was considered an act of defiance against the British, as their horse races were traditionally run clockwise.

No matter the historical perspective, NASCAR’s format is by no means strange and is deeply rooted in the history of motorsports. NASCAR is simply one of many racing sports where competitors speed around an oval-shaped track. For example, track events are held on an oval, where athletes run counterclockwise.

Surprisingly, the tradition of running and racing counterclockwise in an ovular pattern may have scientific foundations. Scientists believe that human bodies are more comfortable moving in counterclockwise motions, although the science mostly serves to possibly explain why track athletes move this way as opposed to serving to explain how NASCAR races are held this way.

It may be more plausible that NASCAR’s racing format came about as a result of motorsport history, as well as through regulations made during NASCAR's founding. Officials decided on a racing format (in this case, counterclockwise racing on an ovular track) and stuck with it, as doing so ensured consistency among NASCAR races. It is worth noting that nearly a quarter of today’s NASCAR races are held at road courses, which feature turns in both directions.

Since NASCAR race cars have the driver positioned on the left side of the car, a driver is less likely to suffer serious injury if they crash into the wall. This is because the right side of the race car would absorb the initial brunt of the impact into a left turn.

The same principle applies to driving sports in other countries and regions, as vehicles in England utilize a right side driver’s side. Their racing sports, as a result, are conducted (for the most part) in a clockwise direction, for the same safety reasons. It is clear that the choice to drive in one direction during NASCAR’s sporting events is an intentional one, informed by the priority of driver safety.

So, is NASCAR’s racing format deserving of the bullying it seems to endure from both spectators and motorsports enthusiasts? It appears clear that the decision to run NASCAR races in one direction was made intentionally.

Humans seem wired to turn left. Track athletes run this way so as to generate more power and better align with their bodies instinctual preferences. Additionally, NASCAR races turn left in the interest of safety. Drivers on the left side of the car, who race in a counterclockwise direction, have far lesser chances of injury if their cars impact a wall.

To fans, NASCAR races ignite a fiery enthusiasm that is unmatched as they continue to pack the stadiums on race day. For drivers, the format of driving in one direction is a safe option.  NASCAR utilizes a reasonable racing style that suits both drivers and fans.

Do fans enjoy the counterclockwise racing format of NASCAR?

Do drivers get tired of turning in one direction during an entire race?

Gauging the opinions of all of NASCAR’s drivers seems like an impossible task. Studying the physical effects that the sport has on its drivers, however, may offer insight into their opinion. During a race, the constant left turns apply incredible stress through forces on a driver’s body. However physically taxing this may be, drivers still race in NASCAR events, so it would appear that turning in one direction during a race is not a deterrent for these dedicated athletes.

Are all NASCAR races counterclockwise?

Most NASCAR races, and all of those on oval tracks, are run counterclockwise. The only exceptions are a few road courses, notably Watkins Glen and the Charlotte Motor Speedway Road Course, which are run clockwise. Keep in mind that road courses have turns in both directions.

Pages Related to Why Do NASCAR Cars Only Turn In One Direction?