Why is Danica Patrick Popular In NASCAR? 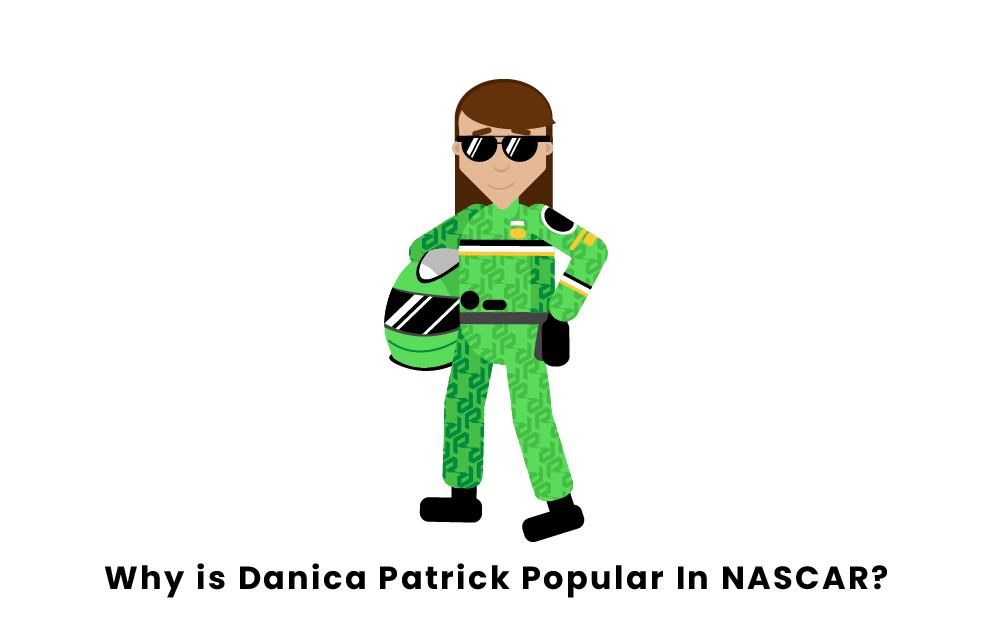 Danica Patrick is such a popular and well-regarded NASCAR driver for many reasons. She is a groundbreaking woman driver who had immediate and inspirational success, she has become an icon in the sport and outside of the sport for various marketing deals, she has authored her own biography, and more.

Danica Patrick is very popular, so popular and well-known that from 2005-2010 she was voted the Indycar series MOST popular driver and in 2012 was voted the Nationwide NASCAR’s most popular driver. Danica Patrick has known she wanted to race since her early days at the karting tracks in her home state of Wisconsin. She had early success in go kart racing, where she was championship winner for multiple years. From there on out, Patrick was fully set on seeking out racing; she departed from high school to race in the UK which sparked her true love for racing.

After finishing second in a very critical and popular race in the UK with two seasons in the Vauxhall racing league, she earned a deal back in the United States in the Indycar world. This came from her being discovered by the well-known former Indy Driver himself, Bobby Rahal. In her young career Patrick was already becoming a household name in multiple countries. But this was only the beginning for Patrick’s fandom.

Patrick, upon her Indycar arrival, was only the 4th woman to ever qualify for the Indy 500, the most prestigious car race. She led the race at multiple points, but ultimately ended up finishing fourth. Other accomplishments in Patrick’s career have been highlighted by her racing success and her record breaking feats both individually and being the first trailblazing woman in many of these races. For example, in the Daytona 500, she was the first woman to ever start in pole position at 13th.

She switched racing teams and even won the Firestone 300, highlighted by her winning by a margin of only 5.86 seconds racing over some older, more experienced racing icons. Other highlights in her career include becoming the first woman to win a major-league open-wheel race in a North American series (Indy Japan 300), tying the record for most poles in a rookie season, and more top finishes in well-known and renowned races.

Among her success and popularity in NASCAR, Danica has gained some serious sponsorships and has become a spokesperson for a variety of her brands, all attributed to her fame and great success in the sport. She is sponsored by Meijer, a grocery chain, Coca Cola, Motorola, XM Radio, Boost Mobile, Tissot, and most famously her characteristic green Go Daddy racing garb and early car wraps.

Many people don’t know the intensity and physical toll that racing takes. Danica’s work ethic is very well regarded as her rise to the top is inspirational, and because she knows the rigors of exercise, dieting, and has inspired so many she has written two books on the matters. The former, in 2007 was Danica-Crossing the Line, the aforementioned biography, as well as Pretty Intense: The 90-Day Mind, Body and Food Plan That Will Absolutely Change Your Life, a self-help book, both of which had great success in both sales and reviews.

Danica retired in 2017 without much a fairytale ending following a loss of a sponsorship and two crashes in her final races. After her racing career she has delved deep into the world of podcasting, starting her own, she founded a clothing line called Warrior, has hosted many television shows on Spike, and has remained in the spotlight notably with her relationships with former NASCAR driver Ricky Stenhouse JR. and Green Bay Packers quarterback Aaron Rodgers.

Why is She So Inspirational?

Overall Danica Patrick’s career has been triumphant and inspirational to say the least. Danica’s racing ability oftentimes is criticized but there is no denying the fact that she was a groundbreaking woman in the sport who gained fame while being a great driver in a male dominated sport. Her rise from a young Go Karter to a trailblazer and record breaker is unprecedented and is the main reason that she is so popular. Additionally her ability to capture fans through other mediums and platforms, such as her fitness, marketability, and more has allowed Danica to maintain her popularity and fans over all of these years and continue to do so after her retirement and for the foreseeable future.

Pages Related to Why is Danica Patrick Popular In NASCAR?