Why Does NASCAR Only Allow Four-Speed Transmissions? 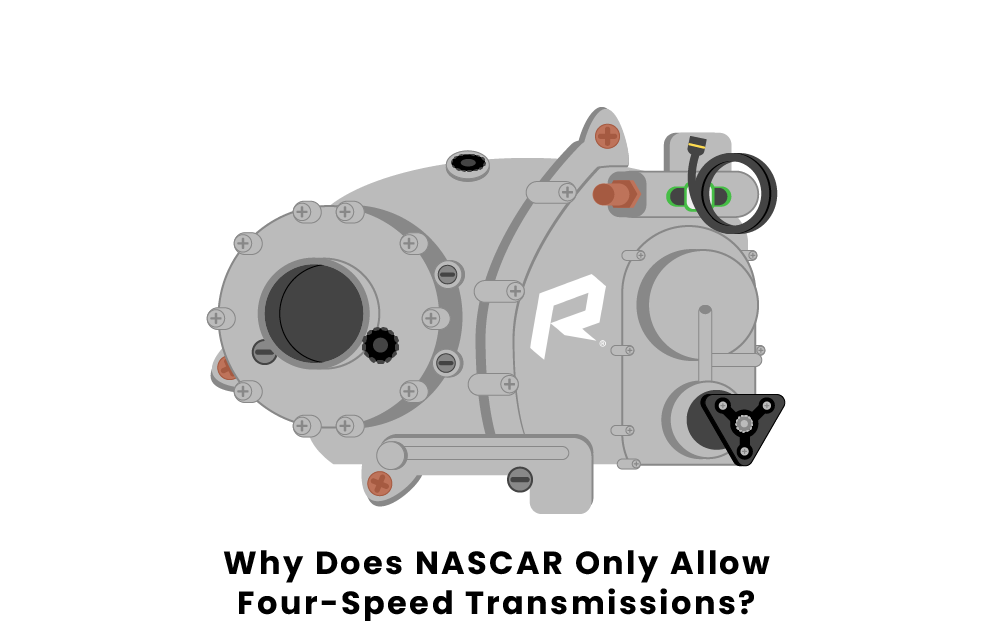 NASCAR is a stickler for tradition. Safety regulations have changed greatly since the sport’s birth in the 1940s. Yet some technical aspects of the NASCAR race car, such as its transmission, remained constant until recently. When NASCAR first began, the cars were mostly unmodified aside from the interior, and straight from the factory, with the popular model among drivers being Ford’s design. In the 1950s, Ford had a four-speed transmission, a derivative of which was used in races until 2022. Another popular model from early racing days includes the Muncie four-speed transmission. The Chevrolet muscle cars powered by Muncie transmissions were affectionately called “Rock Crushers.” Debuting in 1968, but with roots in the 1950s, the transmission was high-endurance and heavy duty. The original H-design for the four-speed transmission can be traced back to the 1930s with the Borg-Warner transmission. While modern-day street cars are mostly automatic now, as of 2022, NASCAR requires that cars use a five-speed manual transmission.

Implications of a Manual Transmission

The manual transmissions mean the driver must be very in tune with the car they are driving. One may notice while watching NASCAR that the drivers use a clutch to change gears. Rather than using a clutch to change gears all the time, which can be taxing, drivers use a technique called “floating” to shift. Floating is done by carefully accelerating the vehicle until one reaches the desired RPM (revolutions per minute) and then shifting gears without depressing the clutch pedal.

Unlike manual transmissions for a street car, NASCAR stock cars use straight-cut gears and no synchros. Straight cut and helical gears are the most commonly used in cars. The advantage of a straight-cut gear while racing is that, unlike a helical gear, they produce no axial load, which means there is no restriction on the amount of torque used. Due to there being no axial load, the transmission produces comparatively less heat, which is very important for racing cars, as precautions must be taken against overheating. No axial loads also mean a smaller and lighter engine, as axial loads require bearings and output shafts. Straight-cut gears are also cheaper, which is cost-productive as gears must be changed in the transmission after every race. While helical gears provide far less noise and an easier ride, straight-cut gears have the advantage of speed.

The four-speed transmission wasn't changed for various reasons, one being that the more gears added, the heavier the transmission becomes. Keeping the car light and without unnecessary equipment weighing it down is important in NASCAR. For example, their stock cars do not have air conditioning, as those systems can weigh as much as 50 pounds. The old four-speed transmission was relatively light, weighing only 80 pounds. The current five-speed transaxle is more than twice as heavy as the outgoing model, weighing 172 pounds when equipped with standard options.

NASCAR has strict guidelines for the cars and components with which teams are permitted to compete. Part of those guidelines limits teams to a single model of transmission in their race cars: the Xtrac P1334 five-speed sequential transaxle. Xtrac, a North Carolina-based racing parts manufacturer, was tapped to be the exclusive supplier of transmissions as they are a long-time supplier of components to NASCAR. Xtrac offers the P1334 in three different gearbox configurations, each with different gear ratios optimized for different types of tracks.

Why are manual transmissions used instead of automatic?

Manual transmissions have been used in stock cars ever since NASCAR began. There is a lot of disparity between drivers who prefer manual versus automatic transmissions. The argument for the superiority of the manual design is that it offers more control to the driver. It is also more fuel efficient and has lower service costs to have a manual transmission. However, manual transmissions require far more practice and an experienced driver. Many drivers of manual cars comment on how they enjoy the sense of control they have over their vehicle versus an automatic.

How many transmissions are brought to each race?

The team and pit crew is responsible for bringing backups for all elements of vehicle repair, including the transmission. Teams make sure to come prepared with at least three transmissions, including the primary transmission already installed in the race car. The other two are backups brought to the track in case of any failures faced during a race.

How much shifting happens during a NASCAR race?

Since the track is usually oval in shape, there is actually a minimal amount of shifting that happens in NASCAR. This is part of why the four-speed transmission was used for so long; it was cost-effective and not necessary on the track to have more than four gears. A four-speed is also far more reliable than a transmission with more speeds. The introduction of the five-speed transaxle has slightly increased the average number of shifts during races, as drivers have one more choice for gear selection.

What sort of transmissions do racing cars not in the NASCAR circuit use?

While NASCAR is a popular sport among Americans, other car racing, such as drifting or street racing, do not adhere to the strict regulations and rules which NASCAR requires of its teams. Four-speed transmissions are virtually unheard of in these cars, as racers have ramped up their gears to six- and even ten-speed transmissions.

Pages Related to Why Does NASCAR Only Allow Four-Speed Transmissions?