Why Do F1 Cars Go Faster Around Corners Than NASCAR Cars? 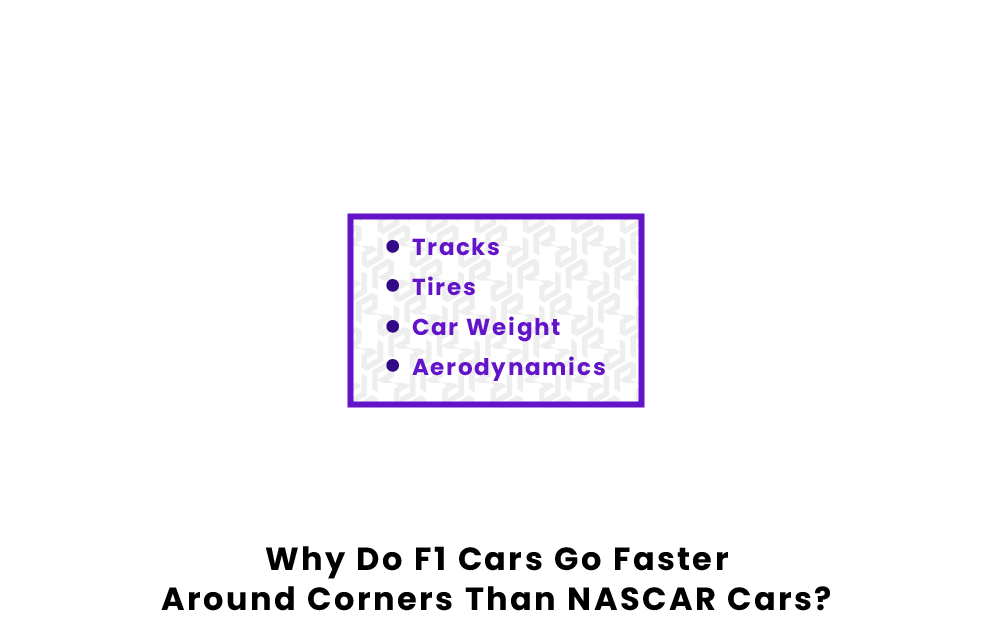 NASCAR and Formula 1 are very different motorsport categories. The cars look very different, they each run on tracks very different from each other, and the engines are not nearly the same; besides the fact that they are both car racing categories, there are really not many similarities left.

When going through a corner, a car's ability to go fast comes down to grip, how much the car "sticks" to the track is what determines how fast it can go without spinning. In a race car, nothing is as simple as it sounds, and so there are numerous components in a car that affect its grip and consequently corner its speed.

Therefore, there isn't just one reason that leads to F1 cars being faster in corners, but several. Check out some important things below!

In NASCAR, races are set mostly in oval tracks, where turning angles are small, while in Formula 1, circuits are very different from each other. Corners in F1 races vary in angle, speed, and even inclination. Therefore, the first thing influencing corner speed is corners themselves! In F1, there are both fast corners and slow corners, done at different speeds and using different techniques. On the other hand, NASCAR corners tend to not be too different from each other for the most part. All those differences in track format and more importantly in the corners also make it harder to compare which one is faster going through corners. Truly, the only way to do so is to have both cars drive on the same track. Although F1 has raced in oval tracks in the past, that doesn't happen that often.

Tires are one of the components that provide the most grip in a car. While NASCAR uses Goodyear tires, F1 uses Pirelli tires. Given the natural differences in the sport, the tires are different, and thus provide different levels of grip. In addition, F1 tires are 16 inches wide, compared to 11.5 inches for NASCAR, a significant difference. With more surface in direct contact with the track, there is more grip for cars. That makes a huge difference when speeding through corners.

Car weight also has an impact on grip, but especially on grip when cornering. While at slower speeds more weight can increase grip, heavier cars are tougher to turn, and thus slower at corners.

Formula 1 cars alone weigh around 1600 pounds. Remember that refueling is not allowed in F1 pit tops, so as the race goes and fuel is consumed, the car gets lighter.

NASCAR cars are a lot heavier, at 3300 pounds. Weighing more than double of what an F1 car weighs, it makes sense, and it is even expected that they are slower in corners.

The single most important thing to adding grip to a car is aerodynamics. More specifically, downforce is what gives cars grip to go fast through corners. By definition, downforce is the force exerted over the car by the wind, by touching the car's surface. That is the result of many hours of engineering in which aerodynamicists study the best ways to get the most downforce without losing speed.

F1 cars look very different from road cars much because of their aerodynamic design. In Formula 1, cars have front wings and the rear spoiler, two of the main components that produce downforce. The aerodynamic setup can be modified to be one with more downforce or one with less. More downforce setups are used in tracks like Monaco, where top speeds aren't that high, and cornering with precision is needed, while a lower downforce setup is used in tracks such as Monza, where there are long straights and few slow corners.

In NASCAR, downforce is engineered a little differently. NASCAR cars have their bumpers designed to be very wide and low, which will consequently increase the airflow on top of the car, increasing downforce. As in Formula 1, NASCAR cars also have rear spoilers, which are part of creating the downforce necessary. NASCAR teams can also make adjustments that may increase or decrease downforce as needed, however they have less room to do so than in F1.

Formula 1 cars have an aerodynamic design that allows them to have more grip than NASCAR cars, and consequently be faster through the corners.

What is the fastest corner in F1?

There are many fast corners in the Formula 1 season, all with similar speeds. Nonetheless, the one that has the highest average speed is the famous Copse Corner, in the very traditional Silverstone Circuit. On Copse, drivers go through at an astonishing 180 mph. Copse is the 9th turn out of 18 in the Silverstone circuit. A copse is a small pocket of dense woodland in the middle of a field. The corner is surrounded by two copses, and thus it has this name.

Why do corners have names in F1?

While all corners have numbers assigned to them (turn 1, turn 2, turn 3…) some of the most famous and beloved have been given more original names. Some of the most famous corners in F1 have names like "Eau Rouge" in Belgium, the "Senna's S" in Brazil, and the "Grand Hotel Hairpin" in Monaco. Corners may receive names like these for being famous for something, having some cool story, or even its characteristics. Overall, it is an easier way to remember turns, and also for F1 fans to show their passion for the sport.

What is drag in racing?

In racing, drag is another aerodynamic effect that influences the performance of cars. Drag is the resisting force that comes from the air pushing against the car, which slows it down. Drag is also a consequence of downforce; the more downforce there is in a car, the more drag a driver will experience, and so the slower they will go. Drivers can reduce drag by using a technique called crafting.

What is drafting in racing?

Drafting is an aerodynamic technique used in racing which allows cars to reduce their drag and go faster. In drafting, a driver will drive directly behind the car in front, almost touching the front in the other car's rear. That way, the car behind gets a smoother and cleaner airflow. The region behind the car with the better airflow is called the slipstream.

Pages Related to Why Do F1 Cars Go Faster Around Corners Than NASCAR Cars?