Why Are Stickers Used As Headlights On NASCAR Cars? 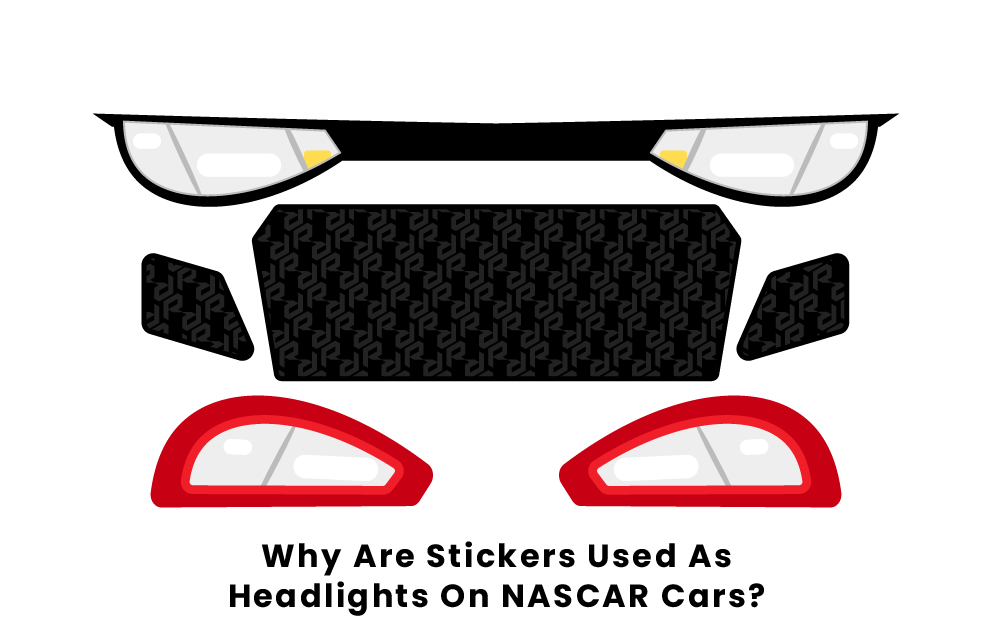 NASCAR cars are designed to drive at high speeds for long amounts of time. Each NASCAR race features 40 cars, and although there may be some differences between how the cars look or what parts they have, one thing remains the same with all NASCAR race cars; their headlights. NASCAR cars use stickers for headlights on every car in every race, even if the race is at night. If you are not looking closely, the stickers will certainly appear to be real headlights, but in reality, the headlights are simply one of many stickers on NASCAR cars.

Stickers are used instead of real headlights for several reasons. One essential reason for their use is to protect other drivers on the track. If a car got into a crash during a race with real headlights, the glass would likely break, causing debris to cover the track, potentially puncturing other car’s tires. Sweeping the glass off the track would also be a hassle for NASCAR crews and would likely delay the race every time a crash happened. NASCAR can be a very dangerous sport as it is when cars begin to crash, so eliminating glass headlights is just one of many ways that NASCAR makes the racetrack safer for its drivers.

Real headlights would also be unnecessary weight to add to the car. NASCAR requires all cars to weigh no less than 3,400 pounds, including everything inside the car (including fluids too) except the driver. Drivers ideally want their car to be as close to the minimum weight as possible because it will maximize their speed. Using stickers instead of headlights is one of many ways to keep the car’s weight down as drivers try to get every advantage over their opponents they possibly can.

Night races in NASCAR have become increasingly popular over the years, and they are successfully run despite none of the cars having real headlights. Night races are possible, despite the lack of headlights, because tracks hosting night races feature lights that illuminate the track after dark. Some NASCAR race tracks have stadium lighting and make for a great venue. However, some very well-known race tracks do not have lights, such as Talladega Speedway and Indianapolis Motor Speedway. At tracks like these, although they are extremely popular, racing during the day is the only option due to the lack of lights. Night races are only scheduled at racetracks with the proper lighting.

NASCAR cars utilize stickers for many different reasons in almost every area on the outside of the race car. Before each race, teams wrap their race cars in full-body wraps, sporting the car number, sponsor decals, driver name, and livery for the weekend. Although the full-body wrap is changed for each race, the separate headlight and taillight stickers stay on the car and are not replaced as frequently.

Also, just like the headlights on NASCAR cars, every brake light on the cars are stickers as well. Stickers are used for brake lights for the same reasons they are used for headlights; NASCAR does not want glass on the track if they break and they are really not needed in the sport. Although there is no true need for the stickers, they are utilized to make the car look close to a stock car. NASCAR cars are purpose-built to meet requirements and driver fit, but they are styled to resemble the consumer cars with which they share nameplates.

Why do NASCAR cars have headlight stickers?

NASCAR cars are designed for extreme speeds and racing, but they are still designed to look close to a regular car. Having nothing in the spot of the headlight would look unnatural and negatively affect aerodynamic performance. Placing a sticker where a headlight would be helps preserve performance while maintaining a stock-looking appearance.

Do NASCAR cars have headlights?

NASCAR race cars do not have actual headlights, but they do have stickers on the car that are designed to look identical to headlights. The cars do not have actual headlights to eliminate the risk of glass being broken and covering the track. If glass headlights were to break on the track, it would present a clear danger to the cars and drivers, especially the car’s tires. The headlight stickers are applied to NASCAR cars to make them appear less modified.

Do drivers have the option to use real headlights?

NASCAR drivers do not have the option to use real headlights. NASCAR race cars are specially engineered racing machines that do not conform to the same specifications as the passenger cars with which they share nameplates. As a result, many systems such as air conditioning, anti-lock brakes, and lighting are not present in NASCAR cars in the interest of saving weight and driver safety. When NASCAR races in rainy conditions, a single flashing red light is affixed to the rear of each car to warn other drivers.

Pages Related to Why Are Stickers Used As Headlights On NASCAR Cars?