Why Are NASCAR Cars Able To Refuel While Running? 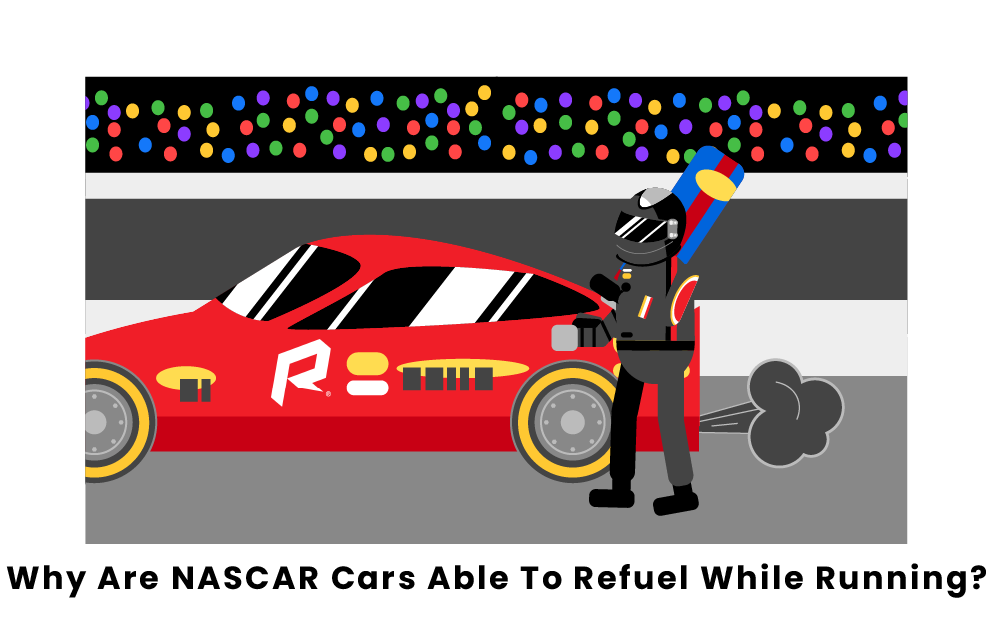 Everyone who drives a car has gone through filling up their gas tank many times. However, most people at a normal gas station have never had the experience of filling their gas tank at a NASCAR pit stop. One of the keys to winning a NASCAR race is not wasting any time during pit stops. One way that NASCAR drivers make this happen is to keep their cars running when their gas tank is being refilled.

Why Do NASCAR Drivers Keep Their Cars On While Refueling?

When filling up a normal car’s gas tank, it is common to turn your car off to prevent any possible fires from spilled gas. However, NASCAR pit crews train hard and have all their equipment ready, so they do not need to worry about spilled or overflowing gas. A few extra seconds at a pit stop can be the difference between winning and losing, so the pit crews put in a lot of effort to make sure the driver does not need to turn off their car during a refuel.

A dump can is one key piece of equipment that pit crews have at NASCAR races. A dump can is a fuel can that is designed to empty everything in it into the race car in under eight seconds. One dump can holds 12 gallons of fuel, so two dump cans are required to fill a NASCAR race car’s fuel tank. If the pit crew knows they need a whole tank, they will empty two dump cans into the car. If the driver is making a shorter pit stop and does not require a full tank of fuel, the crew will only empty one dump can to save time. By weighing and precisely calibrating the dump cans, teams know exactly how much fuel entered the tank. Using precise formulas, the pit crew calculates how much fuel is burned during racing, allowing them to determine how much empty space is in the fuel tank.

Why Not Turn Off The Car Just To Be Safe?

While there is a risk of overfilling your gas tank at a normal gas station, there is nothing normal about a NASCAR pit crew refueling a race car. Pit crews are trained to know how much gas to put in the race car and have fire extinguishers at the ready. Using these systems, filling the gas tank becomes a seamless process that requires lots of practice and effort to perfect. With perfectly calibrated refueling and safety procedures in place, drivers do not need to waste time turning their engines off and back on again.

How much fuel does a NASCAR race car hold?

A NASCAR Gen 7 race car’s gas tank holds 20 gallons. This is about two gallons more than the previous generation. Since a pit crew’s gas can only holds 12 gallons of fuel and the car’s tank is much bigger at 20 gallons, racing team’s must be strategic when deciding when to refuel.

How much does a NASCAR gas can weigh?

A NASCAR gas can is 95 lb when full and only 23 lb when empty. Each gas can holds 12 gallons of race fuel, and each gallon weighs about 6 lb, which totals to approximately 72 lb in fuel. With 72 lb of fuel and the 23 lb of the can itself, a full gas can in NASCAR weighs 95 lb.

How dangerous is refueling with the engine running?

While signs at gas stations advise consumers to turn off their engines, it is not particularly dangerous to refuel a car with the engine running. However, there is always a moderate risk of fire from static discharge when pumping fuel, and keeping the engine running does slightly increase this fire risk. Keeping people, cars, and fuel cans properly grounded can decrease the risk. NASCAR pit crews mitigate the fire risk while refueling by wearing protective suits and aprons, and by having fire extinguishers always at the ready.

Pages Related to Why Are NASCAR Cars Able To Refuel While Running?