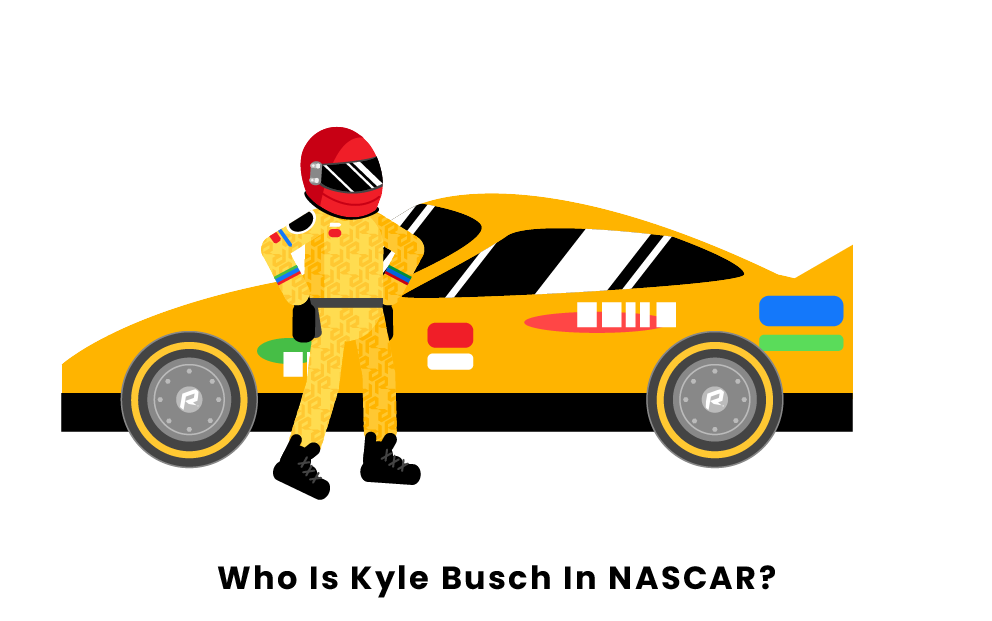 Kyle “Rowdy” Busch is one of the most successful NASCAR drivers of all time, having recently surpassed Richard Petty’s record for most wins across all three national series. Known for his aggressive, calculating driving style and take-no-prisoners attitude, Busch is immensely popular with fans, drawing nearly as many haters as admirers. But who is Kyle Busch in NASCAR? Keep reading to learn more about the racing legend who is still at the top of his game.

Kyle Busch was born and raised in Las Vegas, Nevada. At age six, his father taught him to drive a go-kart, and at age ten, he became crew chief for his older brother Kurt’s modified stock car racing team. (Kurt Busch has also gone on to a career as a championship-winning NASCAR Cup Series driver.) Busch started racing reduced-scale stock cars in the Legends Series at age 13. Within a span of two years, he won 65 races and two track championships at Las Vegas Motor Speedway.

Finally 18, Kyle Busch was allowed back in NASCAR, with the prestigious Hendrick Motorsports giving him a full-time Busch (now Xfinity) Series ride in the No. 5 Chevrolet. His first NASCAR victory came in 2004, during his first full Busch Series season when he won the Funai 250 at Richmond International Raceway. Busch won five races total that season, tying Greg Biffle’s record for most wins by a rookie in NASCAR’s second-tier series and earning the honor of Rookie of the Year. He also made six Cup Series starts for Hendrick in 2004, the first of which was his series debut in the Pennzoil 400 at Las Vegas Motor Speedway, Busch’s home track.

Busch moved up to the Cup Series the next season, replacing Terry Labonte behind the wheel of the No. 5 Chevrolet for Hendrick. His first Cup Series win came at the 2005 Sony HD 500 at California Speedway. After a second win at Phoenix, Busch was voted Cup Series Rookie of the Year.

While Busch was racing full seasons in the Cup Series, he gradually began running more races in the Xfinity and Truck series. In 2006 he raced a complete Xfinity Series schedule for Hendrick, and in 2008 he increased his number of Truck Series starts considerably, driving the No. 51 Toyota for Billy Ballew Motorsports. While not common in NASCAR, Busch’s practice of competing in lower-tier series races while running a full Cup Series season endures today and is one of the things that distinguish him as a driver. His love of the Truck Series and Xfinity Series has led Busch to start his own race team, Kyle Busch Motorsports (KBM).

Hitting his stride in the Cup Series, he won the Regular Season Championship in 2018, and again in 2019, when he also won his second Cup Series Championship. Competitive as ever, Kyle Busch still drives full-time in the Cup Series JGR, as well as making several Truck Series starts for his own KBM team. He currently holds the record for most all-time wins in both the Xfinity and Truck Series.Toward the end of the 2022 season, Busch announced he would be moving to Richard Childress Racing (RCR) to drive the No.8 Chevrolet starting in 2023. As a result, KBM will now run Chevrolets instead of Toyotas.

Busch founded his own race team, Kyle Busch Motorsports, in 2009, initially as a way for himself and former co-driver Brian Ickler to obtain rides in the Truck Series. In 2011, the team began fielding cars in the Nationwide (now Xfinity) Series as well. Since then, KBM has become a major player in the NASCAR Truck Series, bringing home driver’s championships in 2015 and 2017, thanks to drivers Erik Jones and Christopher Bell, respectively.

Today, Kyle Busch Motorsports fields three full-time race trucks in the World Truck Series. John Hunter Nemechek drives the No. 4, with Chandler Smith in the No. 18; Kyle Busch and several development drivers share the schedule in the No. 51. In response to  Busch’s scheduled move to RCR and Chevrolet for the 2023 Cup Series season, he announced that he would be replacing the KBM drivers at the end of the season as they would be staying with Toyota. (KBM will run Chevrolets from 2023 onward.)

Among the many individual championships and races Kyle Busch has won are:

In addition to his many race wins, Busch has set many records and received many awards over the course of his career. He has the most wins all-time in the NASCAR Xfinity Series, with 102 victories, and the most wins all-time in the NASCAR Camping World Truck Series, with 62 wins. In addition to these accolades, he was the first-ever driver in the NASCAR Cup Series to win a race on every track in the circuit of races. He was also the first driver to complete a Triple Threat in one weekend, and to have a winning streak of at least one race win in 18 consecutive seasons of the NASCAR Cup Series.

Some of the awards Busch has earned over the course of his career include:

Kyle Busch is married to Samantha Sarcinella. The couple wed in 2010 in a ceremony that was televised on the Style Network. Sarcinella grew up in St. John, Indiana, and earned a psychology degree from Purdue University. The couple has two children: a son, Brexton Locke Busch, and a daughter, Lennix Key Busch.

In 2006, Busch created the Kyle Busch Foundation, a charity group that provides resources and tools for underprivileged children. Kyle and his wife also created the Samantha and Kyle Busch Bundle of Joe Fund, which educates married couples on infertility and helps provide them with fertility-based resources.

What cars has Kyle Busch driven?

Kyle Busch is largely known for driving the No. 18 Toyota for Joe Gibbs Racing. Beginning in 2023, Busch will drive the No. 8 for Richard Childress Racing. Busch started his NASCAR Cup Series career in the Nos. 60, 84, and 5 for Hendrick Motorsports. He also drove the No. 14 Lexus RC F GT3 for team AIM Vasser Sullivan in the 2020 24 Hours of Daytona sports car race.

Why is Kyle Busch nicknamed “Rowdy?”

Kyle Busch is nicknamed “Rowdy” because of his driving style and persona. Busch is known for driving aggressively, especially in the final laps of races. He has also engaged in fistfights following races and been notoriously combative with media interviewers, only adding to the Rowdy mystique. It should be noted that Busch has mellowed in recent years and is widely respected by his fellow drivers.

How many NASCAR races has Kyle Busch won?

Kyle Busch has won 224 NASCAR races, 60 of them in the Cup Series. This total across all three of NASCAR’s nationwide series is more than any other driver. Rounding out this total is 102 wins in the Xfinity Series and 62 wins in the Truck Series.