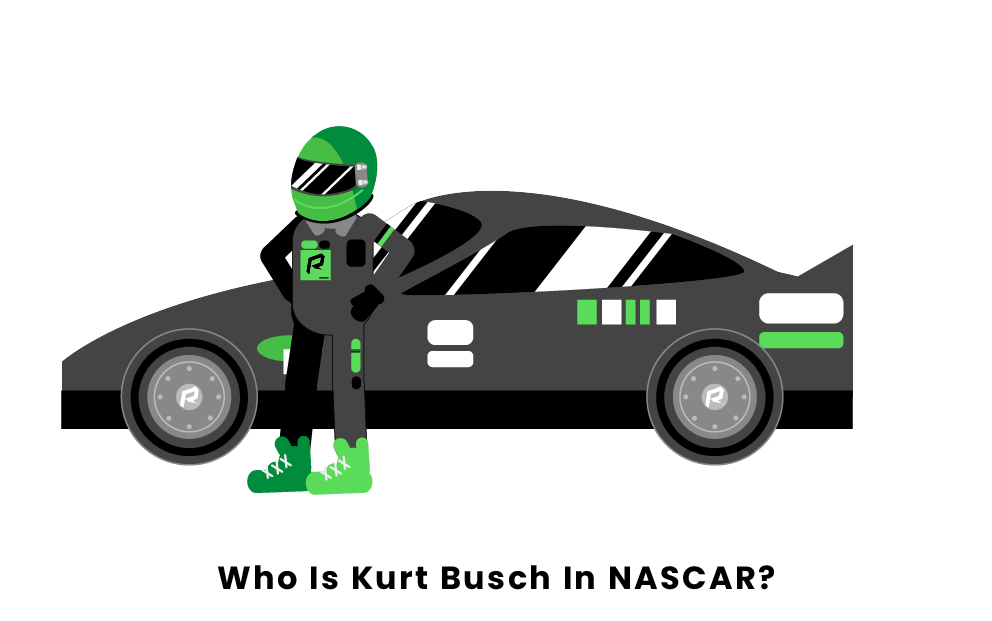 Kurt Busch had a long and successful Cup Series career.  Recently retired because of a concussion, Busch was still going strong when he was forced to leave the series. Keep reading to find out all about NASCAR’s modern Iron Man.

Kurt Thomas Busch was born and raised in Las Vegas, Nevada. He grew up going to local races with his father, Thomas, who bought him a go-kart and enrolled him in a kart racing series at the age of six. Beginning at age 14, he competed in the Dwarf Series, racing modified stock cars with his younger brother Kyle serving as crew chief. (Kyle Busch also went on to a career driving in the Cup Series; he has won two championships).

After getting his start racing Dwarf Series modifieds, Kurt Busch also ran a few races in the IMCA Modified series, which is the premier modified division of the International Motor Contest Association.

Busch got his big break at age 20 when the Star Nursery Racing Team suddenly needed a driver for their No. 70 car in the NASCAR AutoZone Elite Division, Southwest Series for the 1998 season. He excelled immediately, earning Rookie of the Year, then followed that up by winning the series championship in 1999.

The attention garnered by winning the AutoZone Elite Division, Southwest Series championship resulted in Busch being given a tryout at a Roush Racing “Gong Show.” He won the tryout competition, earning a full-time ride in their No. 99 Ford F-150 for the 2000 season of the Craftsman (now Camping World) Truck series.

Busch again made a good impression during his rookie season, winning his first Trucks Series race in the 2000 Copart 200 at the Milwaukee Mile. He achieved three more victories–at New Hampshire, Dover, and Fontana–and finished the season second in driver’s points, easily earning Craftsman Trucks Series Rookie of the Year.

While Kurt Busch was having a breakout rookie season in the Trucks Series, Chad Little, one of Roush’s Cup Series drivers, was struggling. Little was released midway through the 2000 season, and Busch was immediately promoted to fill his seat in the No. 97 Ford. He made his Cup Series debut in the DuraMAX Drydene 400 at Dover Motor Speedway, where he finished 18th. Busch made seven Cup Series starts for Roush Racing at the end of 2000, finishing a season-best 13th at the Charlotte Roval.

Kurt Busch’s Cup Series career was long and sometimes tumultuous. In the course of 776 starts, he raced for seven different teams, the most recent of which was 23XI Racing. His early years in the Cup Series, though his most successful, were marred by controversy and conflict, often with fellow racers and journalists. As his career has gone on, Busch’s attitude and persona have changed considerably; he is now a veteran driver on a highly competitive team and a role model in the sport.

Busch’s first Cup Series win came in his 2002 season, in the Food City 500 at Bristol. He followed that up with three additional victories at Martinsville, Atlanta, and Homestead-Miami. Arguably his best season in the Cup Series was 2004. Busch won the spring Bristol race and both races at New Hampshire Motor Speedway. That season was the first year that NASCAR implemented the “Chase for the Championship” playoff format. Busch won the inaugural playoffs, taking home the 2004 NASCAR Nextel Cup Series championship.

For 2006, Busch moved to Penske Racing South (now Team Penske), driving the No. 2 Dodge. That season, his sole win came in the Food City 500, which was his fifth victory at Bristol. He had a few solid seasons with Penske, finishing fourth in driver’s points in 2009.

After parting ways from Penske Racing in 2011, Busch declined an offer from Richard Petty Motorsports, instead signing with Phoenix Racing to drive the No. 51 Chevrolet in the 2012 Cup Series season. For the 2013 season, he moved again, driving the No. 78 Chevrolet for Furniture Row Racing (FRR). Busch moved again the following season, ending up in the No. 41 for Stewart-Haas Racing in 2014.

Busch started seeing renewed success upon moving to Chip Ganassi Racing (CGR) for the 2019 season, driving the unmistakable all-black No. 1 Monster Energy-sponsored Chevrolet. After making the playoffs three seasons in a row, Kurt Busch made his final move to the newly-formed 23XI Racing, owned by Michael Jordan and Denny Hamlin. Driving the No. 45 Toyota alongside new teammate Bubba Wallace, Busch had a competitive start to the 2022 season.

In July 2022, Busch suffered a concussion at Pocono. He was unable to immediately return to racing because of concussion symptoms. At the end of the season, Busch announced he was retiring from full time competition.

In terms of championships and race wins, Busch has earned many. He was the 1999 NASCAR Featherlite Southwest Tour Champion, the 2003 IROC Champion, and the 2004 Nextel Cup Series Champion. In terms of major race wins, Busch was the winner of the 2010 Coca-Cola 600, the 2010 NASCAR Sprint All-Star Race, the 2011 Budweiser Shootout, and the 2017 Daytona 500. In his career, Busch has also been notable for winning races with all three of NASCAR’s current engine providers (Chevrolet, Toyota, and Ford).

Kurt Busch was born on August 4, 1978, in Las Vegas, Nevada. His father, Thomas Busch, was a mechanic for a Ford dealership, as well as a tools dealer and a short-track racer. Kurt’s father and mother, Gaye Busch, also had a second child, Kurt’s younger brother, Kyle Busch, who is also a NASCAR driver and a two-time Cup Series Champion. Both Kurt and Kyle’s racing careers began because of their father’s influence and encouragement. Kurt’s career began in go-kart racing, after which he progressed to modified stock car racing, in which he often competed alongside his father as a team. At age 18, Busch began to drive in the Legends Series. During this time, he graduated from Durango High School, enrolling at the University of Arizona and pursuing a degree in pharmacy.

Kurt Busch was married to Eva Bryan, whom he met on a blind date in 2006. They were married for five years but separated in 2011. In 2014, Busch met and began dating Ashley Van Metre, a polo player, and they became engaged in 2015, marrying in 2017. However, in 2022, they were also divorced. Kurt Busch did not have children in either of his two marriages.

Kurt Busch is known for being an avid fan of Chicago baseball and football teams, as his parents grew up in Chicago. He is a fan of the Chicago Cubs and the Chicago Bears and also enjoys the Vegas Golden Knights ice hockey team.

Kurt Busch retired from NASCAR in October 2022. He had not raced since July of that year when he suffered a concussion in qualifying at Pocono. At the time of his announcement, Busch announced that he would not be finishing the season and would not race full-time the next year. He stated that he wanted to focus on his health as he was still recovering. Busch is considering a career in broadcasting.

Although Kurt is older, Kyle Busch has had more success in NASCAR. Kyle has won more races, taking the checkered flag 60 times, compared to 34 wins for Kurt. Kyle has two Cup Series championships, while Kurt only won one. However, Kurt won his all the way back in 2004, and Kyle had to wait until 2015 for his first. While Kyle may have won more races, both Busch brothers are extremely successful and respected in NASCAR.

How many NASCAR races has Kurt Busch won?