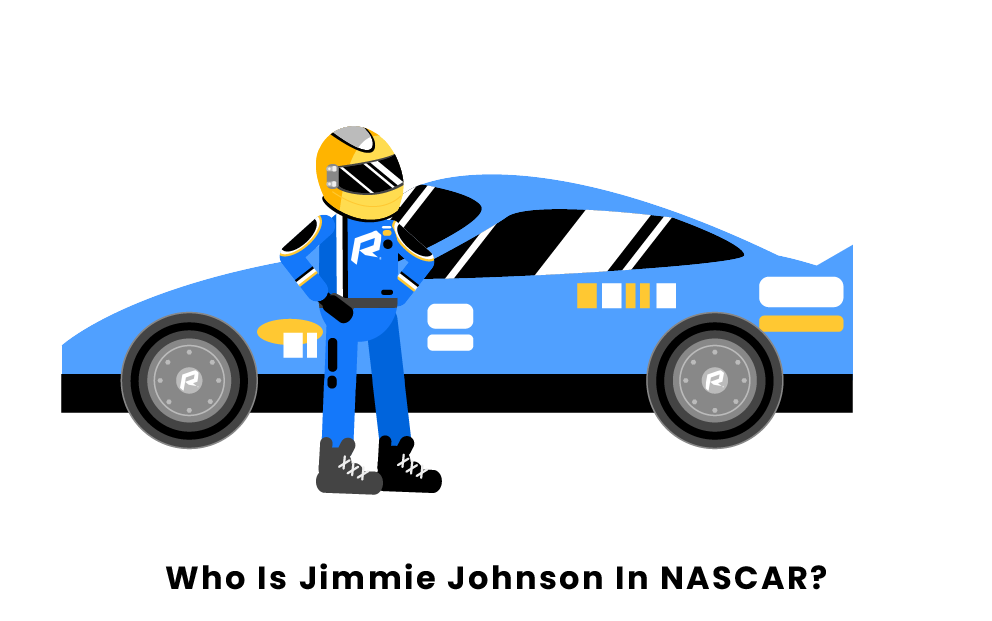 Tied with Richard Petty and Dale Earnhardt for the most NASCAR Cup Series Championship titles ever, Jimmie Johnson is arguably the best stock car racing driver of the modern era. But who is Jimmie Johnson in NASCAR? Keep reading to learn more about the most dominant NASCAR champion in this century.

Jimmie Johnson grew up in El Cajon, California, where he started racing off-road motorcycles at age four. At seven, he won the championship in the 60cc class. After that, he began racing buggies and off-road sport trucks in various classes of the Mickey Thompson Entertainment Group (MTEG) Stadium Racing Series.

Johnson won championships in several stadium and desert racing classes in MTEG, then moved on to the Short Course Off-Road Drivers Association (SODA), driving short-course Trophy Trucks for Herzog Motorsports. There, he finished third in the 1997 Class 8 Championship.

During his early twenties, Johnson was also competing in desert races like the grueling Baja 1000 in the SCORE International (Southern California Off Road Enthusiasts) off-road racing series. In total, Johnson’s early off-road racing efforts across the MTEG, SODA, and SCORE series netted him 25 wins, six championships, and a Rookie of the Year commendation in each of the three series.

Still with Herzog Motorsports, Johnson began stock car racing in 1998, driving full-time in the ASA National Tour Series. Over two years and 40 starts, he achieved two wins and 31 top-ten finishes. In the same two-year period, Johnson made eight starts in the Busch (now Xfinity) Series (also for Herzog), marking his first experience in a national NASCAR series. For the next two seasons, he went full-time Busch Series racing with Herzog, taking home his first NASCAR win in the 2001 Hills Bros. Coffee 300 at Chicagoland Speedway.

Around this time, Johnson caught the attention of Jeff Gordon (then the lead Cup Series driver at Hendrick Motorsports), who subsequently recruited him. Johnson drove in four Cup Series races for Hendrick in 2001, making his debut in the UAW-GM Quality 500 at Lowe's Motor Speedway. In the 2002 season, Johnson moved to a full-time Cup Series ride in the Hendrick Motorsports No. 48 Lowe’s-sponsored Chevrolet, a fourth team car fielded especially for him. Johnson had a strong rookie season in the Cup Series, taking the pole at the Daytona 500, getting his first win in the NAPA Auto Parts 500 at Auto Club Speedway, and narrowly missing out on Rookie of the Year to Ryan Newman.

For the next few years, Jimmie Johnson turned in respectable seasons, but 2006 was when he began to break out as a NASCAR superstar. That year, he won five races, the Cup Series Championship, and Driver of the Year. This was the beginning of an unprecedented period of dominance that has not been repeated. For the next four years, Johnson successfully defended his title, setting a NASCAR record with five consecutive Cup Series Championships.

Although his streak was spoiled by Tony Stewart’s championship win in 2011, Johnson managed to take home two more Cup Series titles in 2013 and 2016. This put him in a three-way tie with legends Dale Earnhardt and Richard Petty for most Cup Series Championships ever.

In 2020, Jimmie Johnson announced that year would be his last full-time season of NASCAR racing. Although he was already recognized as one of the best racing drivers of all time, he had not had a win in the Cup Series since 2017 and was looking for new opportunities. That same year, he ran an IndyCar test for Chip Ganassi Racing (CGR). The test went well, and CGR offered Johnson a part-time IndyCar ride for the 2021 season.

The 2021 NTT IndyCar season was a period of adjustment for Johnson. Only racing the road and street courses and avoiding the more dangerous ovals, he ran mostly at the back of the pack, getting accustomed to new cars and tracks. However, Johnson decided he would race full-time in 2022, again for CGR in his No. 48 Honda. Although the season was a success, with Johnson achieving a series-best fifth-place finish at Iowa Speedway, he announced he was retiring from full-time racing in September 2022.

Beginning in 2021, Johnson has also been competing in the endurance races on the IMSA SportsCar Championship schedule (24 Hours of Daytona, 12 Hours of Sebring, and Petit Le Mans), driving the No. 48 Cadillac in the DPi class for the Ally Cadillac team. His best finish so far is second place in the 2021 24 Hour of Daytona.

Jimmie Johnson’s most important titles are his seven NASCAR Cup Series championships, tied for most of all time with Richard Petty and Dale Earnhardt. However, he has plenty of other titles to his name. Johnson won the All-Star Race four times and the Busch Clash twice.

Johnson was born on September 17, 1975, in El Cajon, California. He is the son of Gary and Cathy Johnson and has two younger brothers, Jarit and Jessie. His brothers have both also competed as professional racing drivers in various off-road motorsports. Jimmie Johnson attended Granite Hills High School, where he not only raced motorcycles but also competed in diving, swimming, and water polo.

Johnson is married to Chandra Janway, a model, whom he first met in 2002. The couple have two children, daughters Genevieve and Lydia. Johnson and his wife created and launched the Jimmie Johnson Foundation in 2006. Together, they also opened up a four-lane bowling alley called Jimmie Johnson's Victory Lanes, which is located in Randleman, North Carolina. The bowling alley is a part of Pattie and Kyle Petty's Victory Junction Gang Camp and is used by the children that attend the camp. Johnson’s foundation hosts an annual golf tournament in San Diego, California, and is affiliated with various charities and institutions, including Habitat for Humanity, the Hendrick Marrow Program, the Make-A-Wish Foundation, Victory Junction, and the American Red Cross.

Jimmie Johnson is retired. Johnson left NACAR at the end of the 2020 season and drove part-time in the 2021 IndyCar season for Chip Ganassi Racing. Johnson drove the entire season for Ganassi in 2022 but announced he was stepping away from full-time competition in September 2022.

What number is Jimmie Johnson?

Jimmie Johnson drove the No. 48 car. Starting in 2002, Johnson raced full-time for Hendrick Motorsports behind the wheel of the No. 48 Chevrolet. He stayed with the team for his entire 20-season Cup Series career, driving the same car. When Johnson competed for two seasons in IndyCar in 2021 and 2022, he drove for Chip Ganassi Racing, again in the No. 48 car. In occasional IMSA sports car races, he also drives the No. 48.