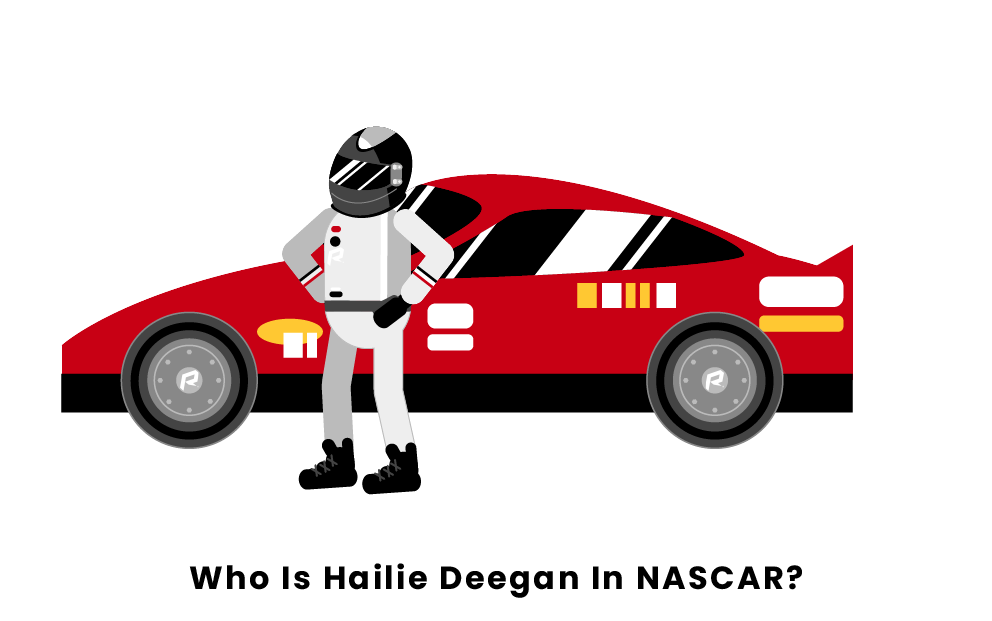 A young, talented rising star in NASCAR, Hailie Deegan was voted the 2021 Camping World Truck Series Most Popular Driver. One of the few women drivers in a male-dominated sport and seemingly able to compete on any surface or in any format, Deegan makes an impact every time she gets behind the wheel. But who is Hailie Deegan in NASCAR?

Hailie Rochelle Deegan was born July 18, 2001, in Temecula, California, where she was raised and attended high school. Her father, Brian Deegan, is an accomplished freestyle motocross rider and off-road racing driver. Thanks to her father’s influence, Hailie began riding dirt bikes at age seven and started racing off-road short-course Trophy Karts the following year. Her younger brothers, Haiden and Hudson, compete in motocross.

In 2009, her first season of off-road racing, Deegan raced a Junior Trophy Kart (a miniaturized off-road racing truck) in the SXS Stadium Series Trophy Kart race, winning the first race she competed in and reaching the podium in the second. That year she also ran two Lucas Oil Off Road Racing Series (LOORRS) races in the Junior 1 Karts class.

In 2013, after winning three races and seeing six total podiums, Deegan won the Junior 2 Karts Series Championship. She moved up to the Modified Kart class the same season. Within two years, she was the 2015 Modified Kart Regional Champion. The following season she took home the 2016 LOORRS Modified Kart National Championship. That same year, she was named the 2016 Lucas Oil Off Road Driver of the Year, the only youth racer to receive the award in history. Deegan is one of only four women ever to have won a LOORRS class championship; the other three are Megan Mitchell, Kali Kinsman, and Corry Mitchell.

Deegan drove full-time in the LOORRS Pro Lite class in 2017, racing full-size off-road trophy trucks. She took home three podiums, finishing sixth in the points championship. She continued to run part-time in the series for the next two seasons, but her focus shifted from off-road to asphalt racing.

Deegan was accepted into NASCAR’s Drive for Diversity program in 2016, an initiative that aims to increase the number of female and minority drivers and crew members in NASCAR. She started training as a development driver and ran a few races in the Legends Series, which uses reduced-scale vintage replica stock cars, for Rev Racing. 2017 saw Deegan selected for that year’s NASCAR Next class; she was the youngest and only female member. That year, she was also signed to Toyota’s driver development program.

Bill McAnally Racing (BMR) gave Deegan her first regional NASCAR experience, selecting her for a full-time ride in the K&N Pro Series West and a part-time ride in the K&N Pro Series East, driving the No. 19 Toyota during the 2018 season. In her K&N Pro Series West debut, she finished fourth after battling for position during the race with Cup Series star Kevin Harvick. After the race, Harvick complimented her driving and expressed optimism about her future in the sport. On September 29, 2018, Hailie Deegan made history by winning her first NASCAR race, the NAPA Auto Parts Idaho 208 at Meridian Speedway, becoming the first woman ever to win a K&N Pro Series Race. She is only the second woman in history to win a NASCAR regional series race, the first being Shawna Robinson in 1988. In 2019, Deegan ran a similar schedule in the regional K&N Pro Series, again with BMR, finishing third in the West Series drivers’ championship.

Deegan made her debut in the ARCA Menards Series (a regional NASCAR series one level up from the K&N Pro Series) in 2019. There, she drove six races for Venturini Motorsports, finishing a series-best fifth in the Herr’s Potato Chips 200 at Indianapolis Motor Speedway.

Deegan signed a full-time deal for 2020 with DGR-Crosley to drive the No. 4 Ford in the ARCA Menards Series. That season she made her debut in a national NASCAR series, driving a one-off race in the Gander RV & Outdoors Truck Series Clean Harbors 200 at Kansas Speedway.

Driving the No. 1 Ford for DGR-Crosley (now called David Gilliland Racing), Deegan moved up to a full-time Truck Series ride in 2021. Her best finish was seventh in the Toyota 200 at World Wide Technology Raceway in Madison, Illinois. Back with David Gilliland Racing (DGR), Hailie Deegan has improved in the 2022 season of the Camping World Truck Series. She finished sixth in the Chevrolet Silverado 250 in Ontario, Canada, setting a new personal best finish in the series.

In 2022, Hailie Deegan ran a one-off race in the Xfinity Series, driving the No. 07 for SS-Green Light Racing. She finished 13th, which was a record for the highest finish in the series by a woman.

Since moving to DGR and Ford, Deegan has dabbled in other asphalt racing disciplines, making several starts in the IMSA Michelin Pilot Challenge and Tony Stewart’s Superstar Racing Experience (SRX). Deegan is known for her aggressive driving style, not shying away from contact if it means getting a win. While this has found her some enemies, her fearlessness and self-assuredness have only added to Hailie Deegan’s popularity.

What number is Hailie Deegan?

Hailie Deegan drives the No. 1 Monster Energy Ford full-time in the Truck Series for David Gilliland Racing. Deegan made her Xfinity Series debut in 2022, driving the No. 07 SS-Green Light Racing For, sponsored by Pristine Auctions, in a one-off race at Las Vegas. In the Superstar Racing Experience (SRX) Deegan has driven Nos. 1, 5, and 38.

What NASCAR team does Hailie Deegan drive for?

Hailie Deegan drives for David Gilliland Racing (DGR). Deegan has been driving for the team since 2020 when the team was called DGR Crosley and she was competing in the ARCA Menards Series. Today, Deegan drives the No. 1 Ford F-150 in the Camping World Truck Series. Tanner Gray is the other full-time driver for David Gilliland Racing, with a third seat filled by several part-time drivers.

Hailie Deegan has won a NASCAR race but never in a national series. Deegan won the 2018 NAPA Auto Parts Idaho 208, which was part of the NASCAR K&N Pro Series. She was the first woman to win a race in the series and only the second woman to win a race in a NASCAR regional series. Deegan now races full-time in the Truck Series, where her best finish is sixth place in the 2022 Chevrolet Silverado 250.