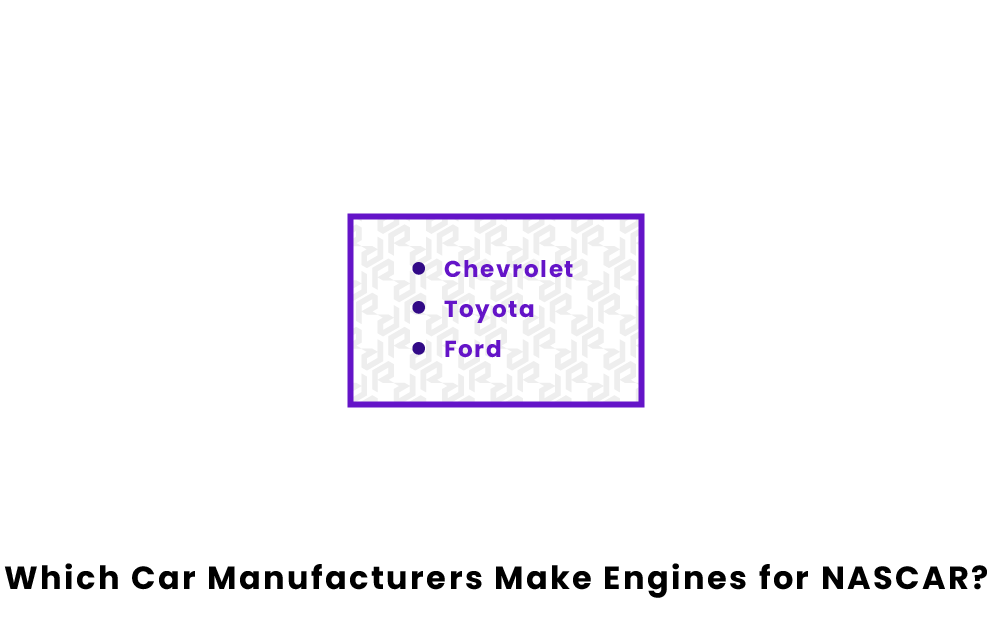 Since its introduction in the late 1940s to the American public, NASCAR has built its repertoire as an American pastime. Every year NASCAR attracts large crowds and a faithful viewership, with 9 million viewers tuning in for the 2019 Daytona 500. Even in these uncertain times with COVID-19 changing the lives of everyone around us, 20,000 still gathered while social distancing at the Bristol Motor Speedway in the summer of 2020. While the drivers may seem like the stars of the show, there are many hidden figures in the world of NASCAR who make this sport possible. An impeccable and sturdy engine is of the utmost importance in the world of competitive car racing. Below are the car manufacturers who have become staples in the racing world for the work they do providing engines to NASCAR's vehicles.

Chevy first began a relationship with NASCAR in 1955, with its V-8 powered engine still used in racing to this day. A V8 engine has 8 cylinder pistons, with its components arranged in a V-shape, hence the name. It is the standard build for all NASCAR engines. The version which they use today however, has been highly refined over the years. In 2007, Chevrolet revamped their original design and introduced the R07. The R07 is a 10,000 rpm small block V-8 engine which is considered one of the most refined small blocks in the world of racing. Crafting an engine with 10,000 rpm (revolutions per minute) to last over 600 miles is no easy feat. In fact, NASCAR prefers that engines cap off their speed at 9,500 rpm, though going over is technically not a rule violation. To prevent overheating on such a high powered engine, oil fills the valve compartments to dampen and cool the valve springs. The small block V-8 was revolutionary for the world of racing when released in 1955 by Chevrolet. It has influenced a generation of engine crafters, who admire the small block build for its impressive horsepower but lightweight body. It continues to be used and is being refined to this day.

Toyota's Racing Development team works to produce 350- 400 engines for NASCAR annually. In the racing world they work to create pristine engines for 6 NASCAR cup teams, which is no easy feat. With NASCAR's strict guidelines, engine manufacturers are required to pay attention to microscopic details to ensure the regulations of NASCAR are being met. While their headquarters are based in Southern California, their engine testing takes place at their North Carolina factory. TDR's North Carolina facility has state of the art race simulators which help to test and pinpoint the manufacturing of their products. Charlotte, North Carolina is considered "NASCAR country," as this is where its headquarters are based, as are many brands and merchants affiliated with the racing world. Toyota keeps their builds enticing with their affinity for privacy. Toyota keeps their intellectual property 2500 miles away from their competitors by having their headquarters in Costa Mesa, Southern California. While their racing simulators and car parts live in North Carolina, their engineering, blueprinting, and manufacturing take place in Southern California, giving them an edge over their competitors.

Ford built the original stock car in the 20s used for prohibition bootlegging, the birthplace and roots of NASCAR. In modern times, the FR9 Ford NASCAR engine was introduced in 2012, boasting a fuel injected 800 horsepower build. In the NASCAR circuit, it has been used in the Monster Energy Cup series, the Xfinity series, and the Gander Outdoor Truck Series. It is based off of the FR9 carbureted platform, introduced in 2009 to NASCAR racing. Prior to this Ford was still using the R452, a design they had been using since manufacturing in the 1960s. FR9 engines require more than 600 parts and are painstakingly crafted at Ford facilities in Dearborn, Michigan.

Dodge ended its partnership with NASCAR in 2012. Although they reignited their relationship with NASCAR in 1999, Dodge pulled from NASCAR manufacturing because of difficulty finding promotional teams and racers to stunt their products as well as difficulty manufacturing with the strict standard put upon them by NASCAR regulations. Many companies over the years have had to put their relationships with NASCAR to the wayside due to the uncompromising directive of the NASCAR rulebook. However, Dodge continues to design racing engines, just not ones used in the official NASCAR circuit. This goes to show how selective NASCAR is about their qualifications for car parts, as well as giving an example of why some manufacturers would want to cut ties with such stringent limitations.

Are all NASCAR engines the same?

While all NASCAR engines and vehicles must adhere to NASCAR's standards, there are some differences between manufacturer's engines. NASCAR rules determine that the engine must adhere to these standards; it must have a fuel injected 90 degree pushrod, with the engine's V-8 cylinders and additional parts coming from NASCAR approved manufacturers. However, everything in between the rules is up to the company manufacturing. Each company makes their work their own by having differing cooling systems, horsepowers, rpms, etc.

When NASCAR started, the rules were far more relaxed than the ones we have today. All it took to race then was car parts which were available to the general public. There was a wide variation of car brands used, with one of the popular designs being a 6 cylinder flathead engine. This engine was used by the Hudson Hornet, an iconic design which won NASCAR races in 1951, 1952, and 1953. The Hornet winning these races proved that there was more to a car than just how much horsepower it produced.

How much does a NASCAR engine cost?

A race car engine is no small investment. In a NASCAR race, the engine and accompanying expert dedicated to managing it cash in at 100,000 to 150,000 dollars per race. This is a reasonable price for the time, finances, and fine detailing put into the creation of NASCAR engines. On average the build of a NASCAR engine costs 60,000-100,000 dollars. In fact, after the driver, the engine is the most expensive cost of a NASCAR race. A driver's wage for a race comes in at about 185,000 dollars.

Pages Related to Which Car Manufacturers Make Engines for NASCAR?