When Does NASCAR Season Start? 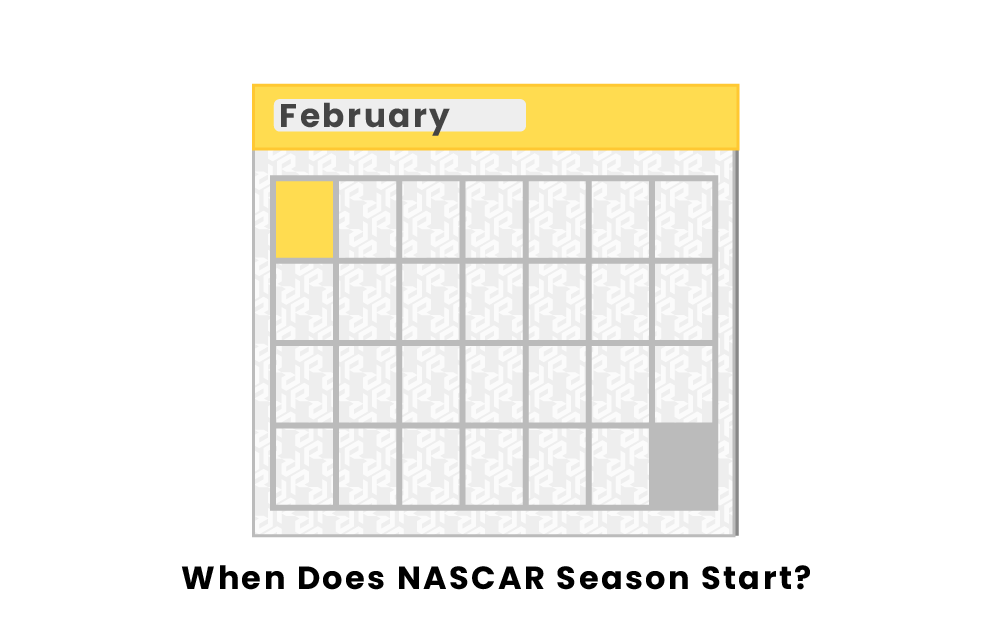 The winter holidays are over, and football season is winding down. Besides, your team didn’t even make the playoffs. March Madness is still months away, so how about some racing? Hey, when does NASCAR season start? Find the answer below, plus all the details you need to gear up for the start of another exciting season of stock car racing.

When Does the NASCAR Season Start?

The NASCAR season starts in February, right around the Super Bowl. There are two races that could be considered the first race of the season: the Busch Light Clash and the Daytona 500. Keep reading to find out more about both races and exactly when NASCAR season starts.

Although the NASCAR season officially starts with the Daytona 500, the Busch Light Clash is, in fact, the first race of the year, marking the beginning of a new season. Formally known as the Busch Light Clash at the Coliseum, The Clash, held at the historic Los Angeles Memorial Coliseum, is the first of two non-points-paying exhibition races that occur during the NASCAR season. The second one is the All-Star Race, held mid-season in May at Texas Motor Speedway.

Beginning with its inaugural race in 1979, The Clash was held at Daytona International Speedway as the kickoff event for the Daytona Speedweeks festivities leading up to the Daytona 500. However, in 2022, the Busch Light Clash moved to its new and future home at the Los Angeles Memorial Coliseum, an iconic football stadium built in 1921. A quarter-mile dirt track is constructed (and afterward torn down) solely for the race, in a process similar to that for the Bristol Dirt Race.

Featuring an exciting format designed for drama, The Clash is a race unlike any other on the NASCAR schedule. Four preliminary heat races determine part of the field, with the top four finishers in each heat advancing to the final race. Then every driver who has not yet advanced competes in one of two additional heat races, called last-chance qualifiers, with the top three finishers in each advancing to the main event. Finally, all of the qualified drivers compete in the 150-lap feature event, hoping to become the next Busch Light Clash champion and take home part of the $2 million purse.

Qualifying, the first formal competition segment, takes place at 5:30 pm PT on Saturday evening, the night before the race. On the day of The Clash, the heat races begin at 12 pm PT, with the last-chance qualifying starting at 1 pm PT. The Busch Light Clash at the Coliseum begins at 3 pm PT (6 pm ET), unofficially kicking off the NASCAR season.

The Daytona 500 is the biggest race of the season and NASCAR’s “Super Bowl.” Held two weeks following the Busch Clash, on the third Sunday in February, the running of the Daytona 500 is when the NASCAR season officially starts.

The most significant, prestigious, and highest-paying race on the schedule, the Daytona 500 is a massive spectacle, drawing the biggest television audience of any NASCAR race and kicking off the regular season with a bang. The first of two Cup Series races held at the Daytona International Speedway (the second being the Coke Zero Sugar 400 in August), the Daytona 500 is run over 200 laps on the superspeedway’s massive 2.5-mile irregular oval track. This race has been the crown jewel of the NASCAR season since the speedway opened in 1959 and has been scheduled as the season-opener since 1982.

The Daytona 500 has a unique qualifying procedure, taking the form of two 150-mile preliminary events known as the Bluegreen Vacations Duel. The Duel events are held on the Thursday preceding the main race, starting at 7 pm ET. Three days later, on the third Sunday of February, the green flag drops on the Daytona 500 at 2:30 pm ET.

Now that you know exactly when NASCAR season starts, don’t forget to circle the start of the playoffs on your calendar! The thrilling “Chase for the Championship” format means playoff contenders face an elimination round every three weeks, making the NASCAR playoffs must-watch racing.

After the running of the Coke Zero Sugar 400, the 26th race of the 36-race official season (held on the final Sunday in August), the regular season ends, and the postseason begins. The next race, the Cook Out Southern 500, held at Darlington Raceway in Darlington, South Carolina, on the first Sunday in September, is when the NASCAR postseason starts. After that, the playoff contenders battle through three exciting elimination rounds, culminating in the NASCAR Cup Series Championship Race at Phoenix Raceway on the first Sunday in November.

When is the first points-paying race of the NASCAR season?

The first points-paying race of the NASCAR season is the Daytona 500, held on the third Sunday in February. There are 36 races that award driver and manufacturer points to the finishers, and the Daytona 500 is the first one. There is an exhibition race, The Busch Light Clash, held two weeks prior to the Daytona 500 at the Los Angeles Coliseum. However, this race is only for prize money and glory and does not award points.

How long is the NASCAR season?

The NASCAR season is one of the longest in professional sports, at eight months long. The season extends past eight months if you include the Busch Light Clash, an exhibition race held two weeks before the start of the season. The NASCAR season typically only includes one or two off weeks, so drivers and teams are on the road or preparing for races for the entire season. The regular season begins in February and ends in October, with the playoffs starting at the beginning of September.

Which driver holds the record for most wins in a NASCAR season?

Legendary NASCAR driver Richard Petty holds the record for the most wins in a NASCAR season, winning 27 races in the 1967 season. Petty’s record is known for the fact that it is currently “unbreakable,” as when he accomplished his winning season, he raced 48 times. Today, NASCAR seasons only consist of 36 races, meaning that it is logistically impossible for a driver to win as many as Petty. Petty’s record season contained another record of 10 consecutive wins, which has also not been broken.

What are NASCAR’s crown jewel races?

Pages Related to When Does NASCAR Season Start?