What Saved Ryan Newman When He Crashed? 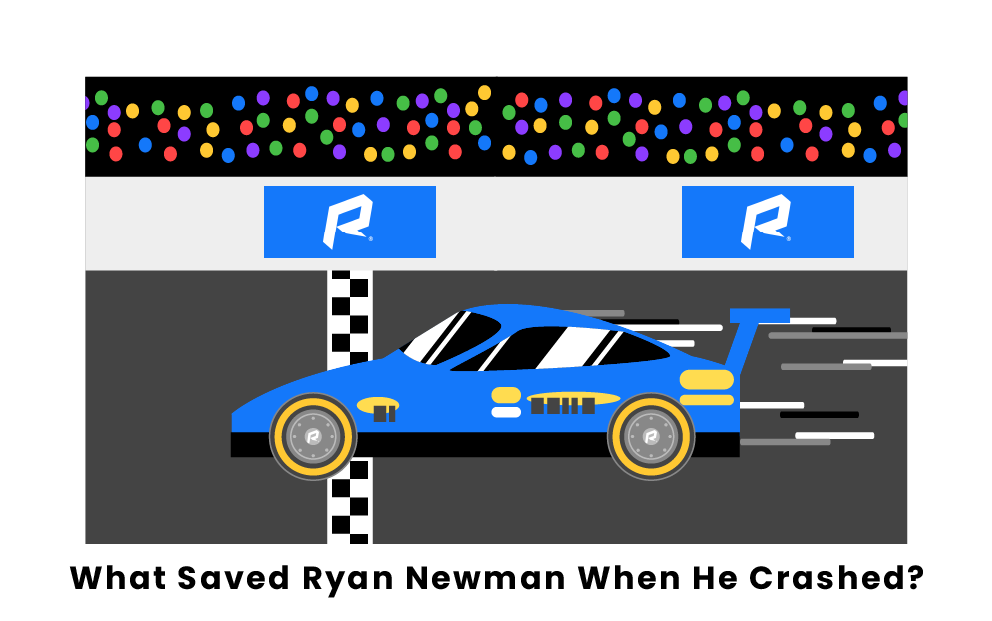 On February 17, 2020, Ryan Newman was driving in the final laps of the Daytona 500. Leading heading into the final corner, he was in a tight race with multiple drivers, when second-place Ryan Blaney touched the back corner of his car attempting to pass. Announcers called the play-by-play as he spun into the wall, his car vaulted into the air, and then landed upside down before getting hit again by a second car, driven by Corey LaJoie. The second impact sent his vehicle flying, spinning multiple times before landing upside down and sliding down the racetrack, sparks flying left and right.

Newman’s car burst into flames moments after the second impact, and rescue teams scrambled to put out the fire and remove Newman from the ruined vehicle. His car slid so far on its hood that Newman actually skidded across the finish-line, recording a ninth-place finish at the Daytona 500.

Denny Hamlin won the race seconds later, and as nobody knew of the severity of Newman’s crash, celebrations got underway. However, the whole race track soon grew quiet as people started to realize just how serious the last-lap crash had been, and Hamlin was quick to apologize for his post-race celebration.

It took rescue teams twenty minutes to get Newman out of his car, after which he was immediately taken to Halifax Medical Center, and an official statement said that Newman had serious, but not life-threatening, injuries from his crash.,

Miraculously, Newman suffered no broken bones or damaged internal organs. Newman said that out of an abundance of caution, doctors had temporarily placed him in a sort-of medically induced coma, but that he was generally okay.5 Newman walked out of the hospital on his own feet only 48 hours following one of the scariest crashes in recent NASCAR history. He was discharged with a bruised brain, and kept under watch for developing injuries. Remarkably, Newman was cleared to return to racing at the end of April, 2020.

Newman’s crash was eerily reminiscent of the horrible crash at the 2001 Daytona 500, which resulted in the instantaneous death of Dale Earnhardt Sr. However, the numerous safety measures implemented as a result of Earnhardt’s death helped Newman survive what could have been a life-ending accident.

How Did Ryan Newman Survive?

At the 2001 Daytona 500, Dale Earnhardt was sent into a wall and died instantaneously upon impact. His death was the fourth in a one-year period, and prompted NASCAR to implement a number of new safety features. These features had a major role in saving Ryan Newman’s life at the same race nearly twenty years later.

One such safety feature is the Head and Neck Support device, or HANS for short, which reduces the gravitational forces on the driver’s spine that occur during crashes. The HANS device is a one-piece harness that covers the driver’s torso and is secured by belts, with a collar that attaches to the driver’s helmet. The HANS has saved numerous lives since its introduction, including Ryan Newman’s, and there has not been a single death since its implementation by NASCAR in 2001.

Another safety measure implemented following the 2001 season that helped to save Newman’s life was the SAFER barrier, a new way of building the retaining walls that surround the racetrack. Whereas before walls were simply a single layer of concrete, the SAFER barrier adds a ring of steel and foam padding that forms a shock-absorbing “double-wall” pattern. The two-wall pattern absorbs the kinetic energy of impacts, lessening the force of collisions between driver and racetrack wall. SAFER barriers began getting implemented in 2002, but were expanding to nearly all racetracks following a 2015 racing season that saw numerous serious accidents.

Newman’s escape from a deadly crash with nothing but a few minor injuries and two months of rest is nothing short of a miracle. However, that miracle was helped by several newly-implemented safety measures, and Newman survived what could have been a worst-case scenario.

What saved Ryan Newman when he crashed?

Ryan Newman survived his horrific 2020 crash because of a number of safety features implemented into NASCAR driving following the death of four drivers in the 2001 season, including the legendary Dale Earnhardt. These features were all created to place the driver’s safety at the front of NASCAR racing. They included HANS devices, SAFER barriers, improved helmets, and tighter seat belt regulations.

In many ways, one could say that Ryan Newman was saved by Dale Earnhardt, almost 19 years to the day after his death.

Did Ryan Newman return to racing?

The severity of Newman’s crash drew widespread concern that he would be seriously injured for the rest of his life, nevermind being able to race again. Unbelievably, Newman walked out of the hospital just 48 hours after his crash, and on April 27 of 2020, he was medically cleared to get back into the driver’s seat.

Because of the 2020 Coronavirus pandemic and the resulting delay of the NASCAR season, Newman only missed three races while recovering from his injuries. Newman returned to racing on May 17, 2020, with a hard-fought top-15 finish at Darlington Raceway.

How does a HANS device work?

A HANS device (Head and Neck Support) is a carbon fiber cast that protects the driver’s head and neck during impacts, especially when experiencing the heavy G-Forces associated with them. It keeps the head and neck stable during a front-end crash by ensuring that the head moves with the chest, which prevents whiplash and the spinal injuries that can come with severe crashes. The main injury it prevents are basal skull fractures, or broken skulls at the base of the head and neck. It works similar to airbags in preventing extreme head movement, but instead of creating a barrier in front of the face, it holds the head and shoulders together.

The HANS device is a carbon fiber collar that goes around the driver’s neck and shoulders. Straps on the back of the neck attach to the driver’s helmet, and these straps allow for only a small bit of head movement forwards and backwards from the shoulder. The thick seat belts used in racing cars that strap over both of the driver’s shoulders and collarbones keep the HANS device in place. The HANS device highly reduces the risk of basilar fractures, and are mandatory in NASCAR and Formula One racing.

What are SAFER barriers?

SAFER barriers are wall additions that have now been implemented into almost all NASCAR raceways. The Steel and Foam Energy Reducing Barrier has an outside made of steel tubing that is made particularly for each speedway. Heavy duty straps attach the steel barrier to the concrete retaining wall of the raceway. Lying between the SAFER steel wall and the retaining wall are styrofoam pads, which serve to absorb the shock of impacts from cars.

A car that collides with a SAFER barrier will have the energy of its impact distributed first along the steel wall, then through the foam pads, and finally along a wide stretch of the retaining wall. Prior to the introduction of SAFER barriers, the only thing to stop a careening car was the concrete retaining wall itself. The force of impact with the wall was enough to kill many drivers, including Dale Earnhardt Sr. and famed Formula One driver Ayrton Senna. The introduction of SAFER barriers have transformed the sport of racing, saving countless lives.

Pages Related to What Saved Ryan Newman When He Crashed?