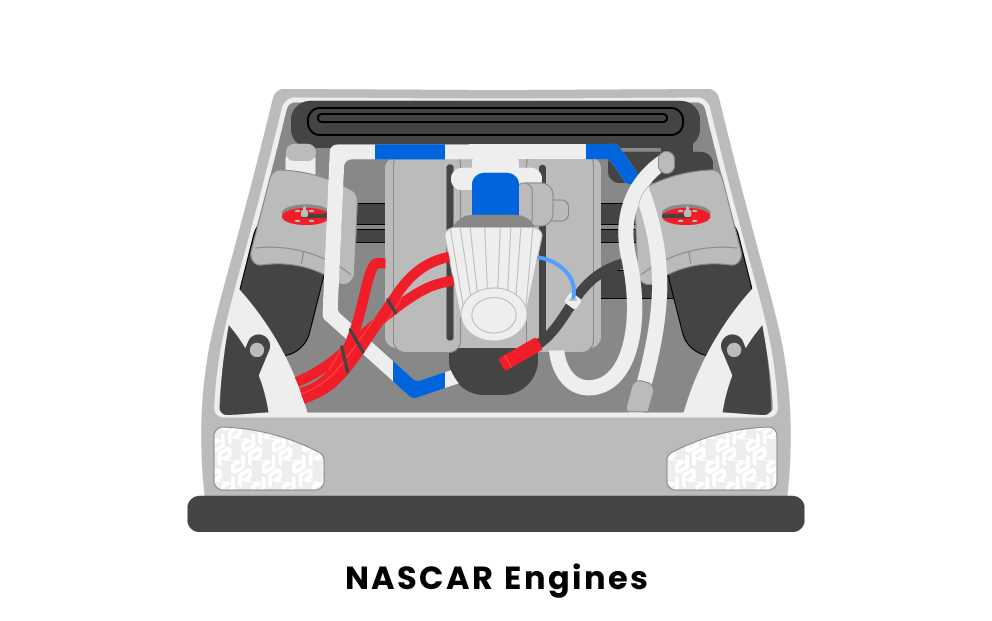 NASCAR races are exciting and extremely loud. Most fans wear ear protection against the roar while the mighty stock cars whiz by at speeds nearing 200 miles per hour. The cars are so powerful, in fact, that drivers must practice the art of accelerating smoothly. Otherwise, they can spin their wheels, slowing down and losing important track position. So what makes NASCAR engines powerful? The answer is a combination of factors, namely construction, tuning, and fuel composition. Keep reading to find out more about these incredible machines.

One of the main things that makes NASCAR engines powerful is their construction: in particular, their advanced materials, large displacement, and thick cylinder walls. NASCAR engine blocks (the bottom parts that contain the cylinders and hold the pistons) are made of high-tech compacted graphite iron.

The engine blocks are bored out to a displacement of up to 5.9 liters (358 cubic inches), much larger than the displacement of the engine on a modern road car. The greater an engine’s displacement, the more potential it has to produce power every time a spark ignites the fuel in a cylinder. Thus, a NASCAR engine’s large displacement is a major contributor to its power.

Tuning is another major reason NASCAR engines are powerful. In their natural, unrestricted state, they are capable of producing over 1,000 horsepower. However, in the interest of driver safety, NASCAR limits the output of their engines to 670 horsepower for most races, further reducing them to 550 horsepower at superspeedway races.

Although overall horsepower is capped, NASCAR race teams utilize various tuning strategies to make their cars’ engines as powerful as possible. Since 2012, Cup Series engines have been fuel-injected, allowing for more precise control of the fuel delivery at all throttle positions.

Using specially engineered engine mapping computer software, race teams can program an engine to deliver the most power when needed, even tuning each cylinder individually. For example, an engine can be tuned to deliver more power and torque at lower speeds for a short track or road course race, allowing a driver to accelerate quickly out of turn. Whereas the same engine would be differently tuned to provide maximum power at high speeds for a superspeedway race, allowing the driver to reach maximum speed on the straights.

Special fuel is a final factor that makes NASCAR engines powerful. They run on a type of race fuel called Sunoco Green E15, which is a blend of gasoline and ethanol and has a 98 octane rating. A fuel’s ability to withstand compression before detonation is represented by its octane rating. Therefore, with its 98 octane rating, Green E15 is much more able to resist detonation than the 88 octane-rated fuel used in most road cars.

NASCAR race teams utilize this detonation-resistant property of the fuel to run their engines at high levels of compression. The high compression allows for greater fuel flow and, thus, greater explosive power with every spark detonation. All of this is possible thanks to the high octane rating of Sunoco Green E15.