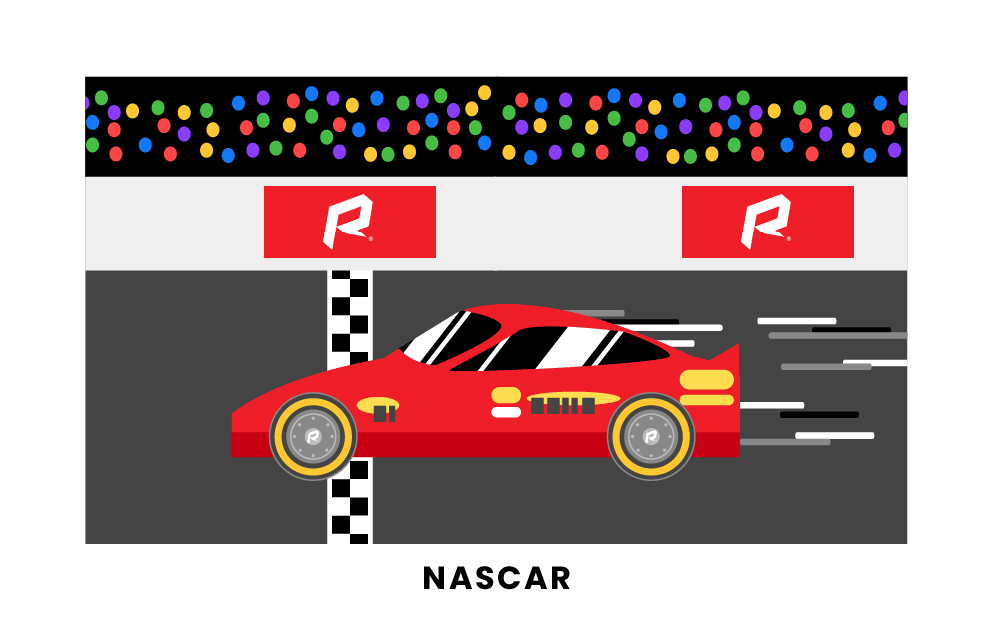 NASCAR is an increasingly fast-paced sport involving stock car racing throughout the United States. 40+ cars zoom around the track within inches of each other and seconds separate the winner from the loser. Each driver has a team that helps to perfect both the driver's performance as well as the car's performance on the track. NASCAR is a unique sport as it is one of the most popular closed-wheeled racing sports in the world. The 36 race season provides plenty of drama and excitement for fans, drivers, teams, and owners alike. 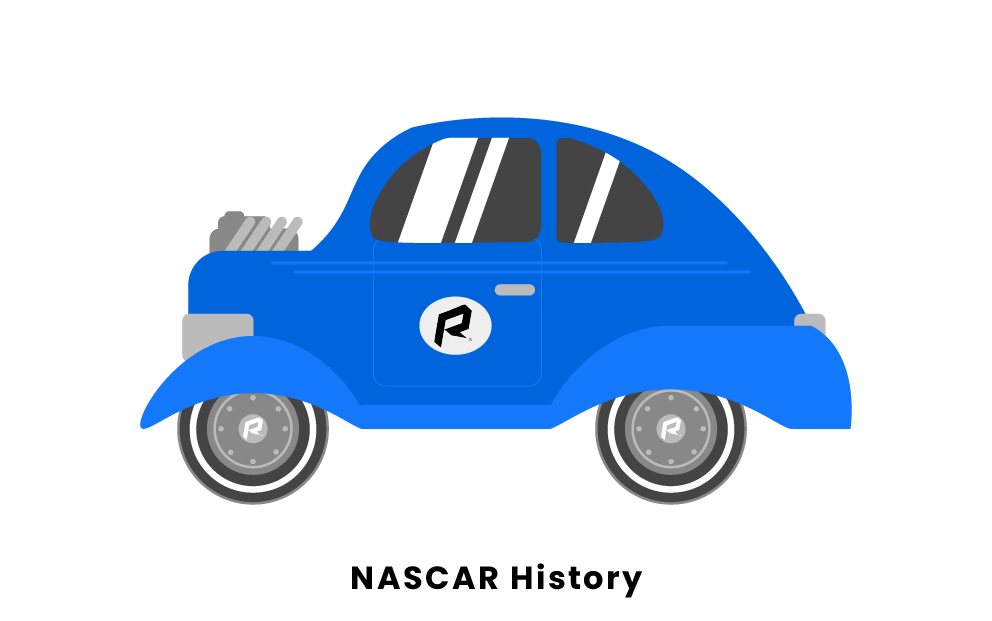 Racing cars is the one of oldest pastimes in the United States and across the globe. The earliest origins of the sport of NASCAR started in the early 20th century. Bill France Sr. was credited with organizing NASCAR and the first races that took place. The sport was organized in late 1947 and the first race was run in February 1948 in Daytona Beach, Florida. The first official Cup Series Race was run in June of 1949 with the first NASCAR championship being handed out later that year in October 1949.

Each NASCAR race is run on a race track. Most of these are oval in shape with a few being longer road courses that are not a set shape. Tracks are classified in a few different types including short tracks, intermediate, superspeedways, and road courses. Short tracks range from half a mile to a mile long, intermediate tracks range from a mile to two miles for a lap, superspeedways range from two and a half miles to three miles, and road courses are generally longer. Each track is unique and there are over 20 tracks that races take place on throughout the season with differences in turns, angles, and pit areas. 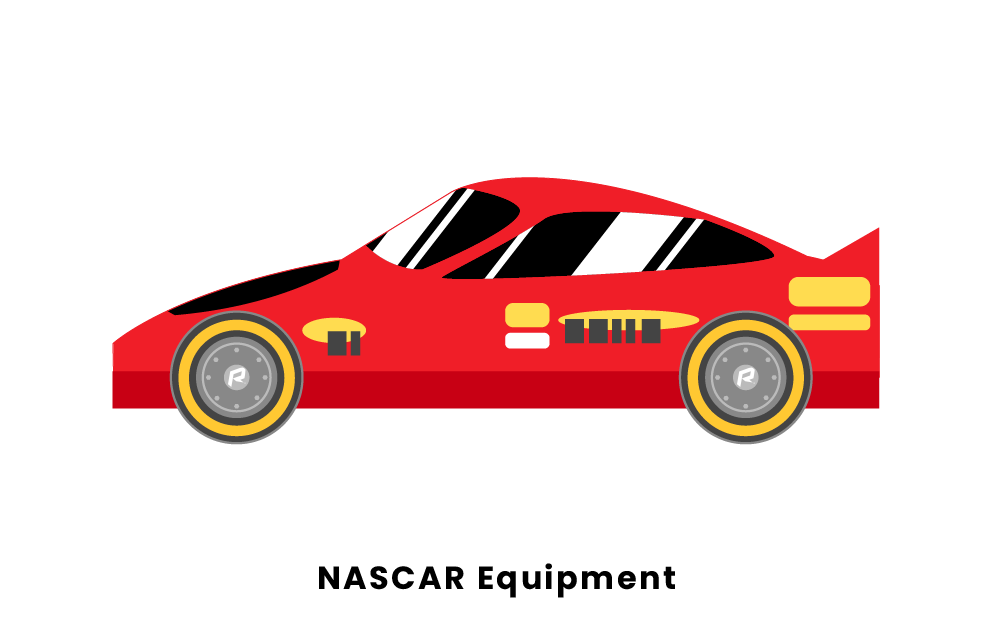 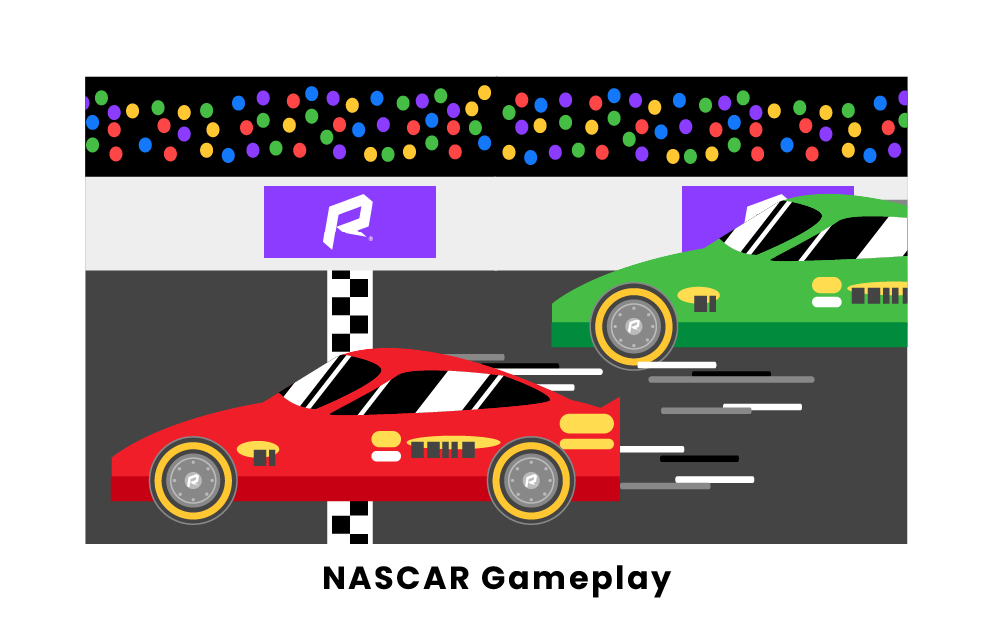 A NASCAR race consists of a predetermined number of laps split into 3 different stages: Stage 1 (Lap 1-60), Stage 2 (Lap 61-120), and the Final Stage (Lap 121-Race End). A NASCAR race's number of laps depends on the length of the race which range from 300 to 600 miles and the length of a lap on the track. Qualifying laps take place to set the beginning positions of drivers. Every driver hopes to win the race or finish as close as possible to the front of the pack.

A race can start and stop throughout due to crashes, debris, or weather-related issues. This process is done through a flag system with a green flag meaning clean racing, a yellow caution flag meaning a crash or debris impedes the race stopping to fix this, and a red flag to end the race for weather or an extreme case like a fatal crash. 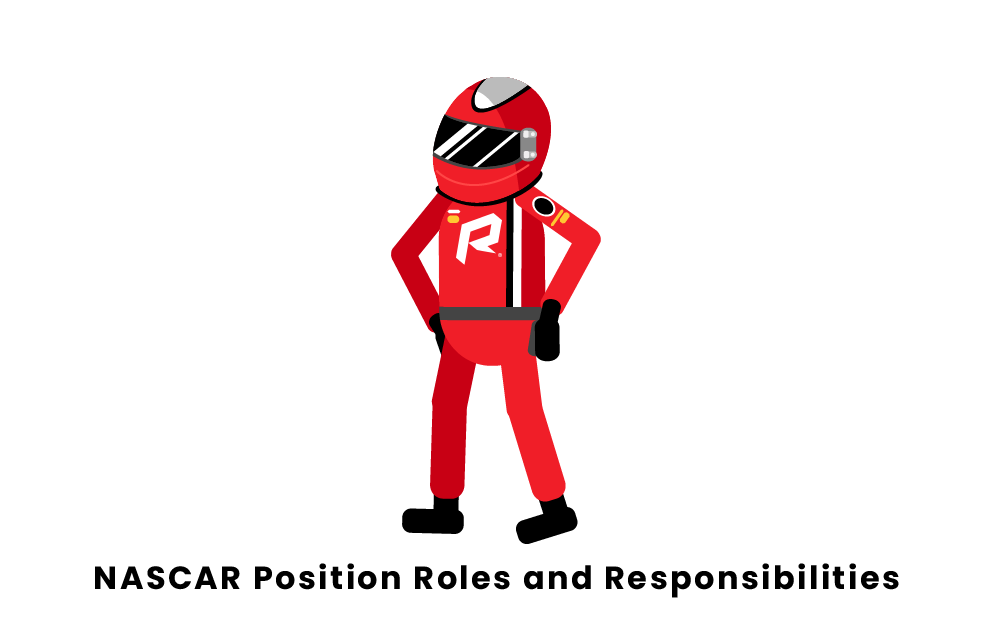 There are a few different positions or roles in the sport of NASCAR. The main roles are the driver, the crew chief, the team owner, and the car pit crew.

The driver races on the track controlling the car throughout the race directly. The team owner oversees the entire operation as the overall leader of the team. The crew chief leads the pit crew and is the in-race leader of the team. They also speak directly to the driver on track too. Another important position is the spotter who also is in contact with the driver on track telling them where other cars are and what to watch out for. Individuals on the pit stop crew have sets position or responsibilities which include: 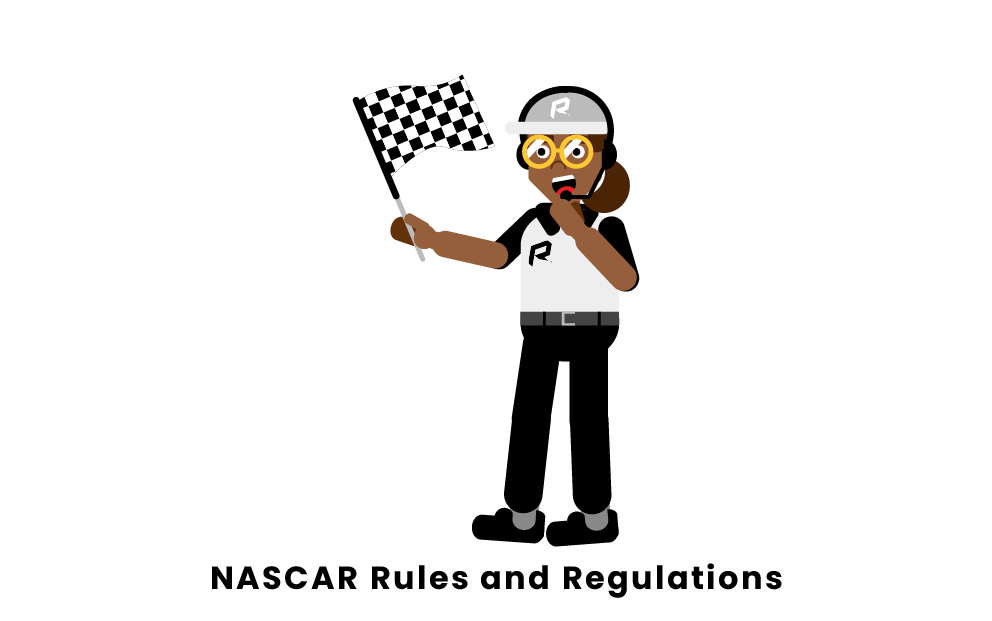 There are plenty of rules and regulations in the sport of NASCAR that affect each and every race. These infractions range from car/engine violations and pit stop infractions to on track rule breaks. The rules in NASCAR are relatively the same in the lower leagues as well with some slight changes.

Engine Limits: Engines known as long-block and short-block engines have limits on their usage amounts during the course of a season.

Car Limits: A race team can only have 12 total cars rostered during a season in case of crashes or engine troubles.

Pit Stop Speed: A driver may not drive faster than 55 MPH when in the pit lanes or else a penalty will occur.

Pit Stop Regulations: Pit crew members cannot jump the wall until the car is inside the pit box, the right side must be addressed before left, all lug nuts must be attached onto wheels. 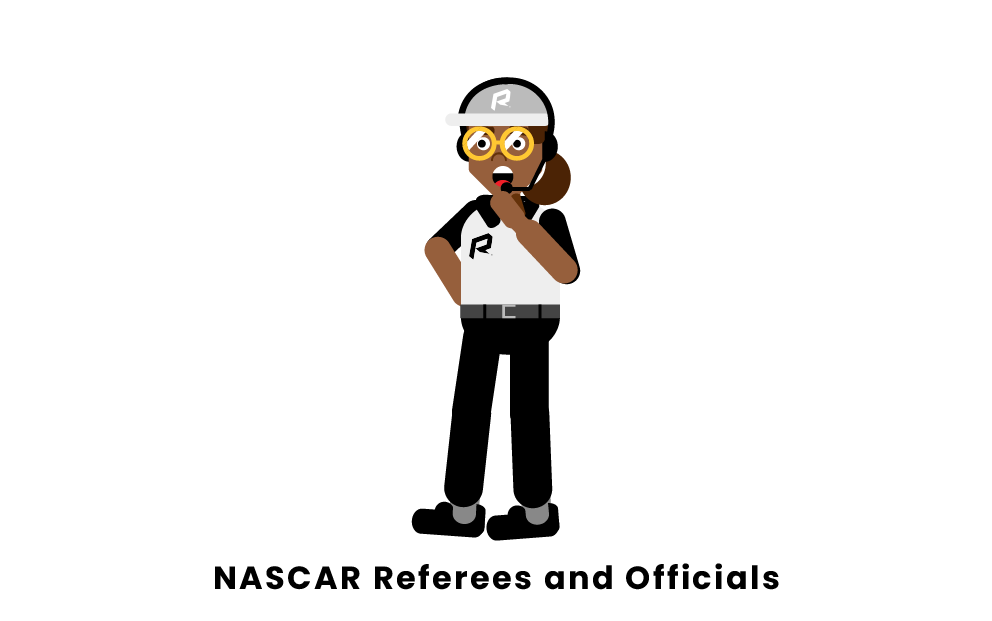 A NASCAR race does not have the most visible referees wearing the zebra stripes most people are used to. The main official in view is the flag man controlling the race in concert with spotters around the track. The main function of race officials is to perform car inspections. These take place throughout qualifying and pre-race as well as post-race on the winning cars to make sure all of the rules and regulations were followed. In-race inspectors are also assigned to a specific driver to make sure all elements of the race are run smoothly and adhere to regulations. 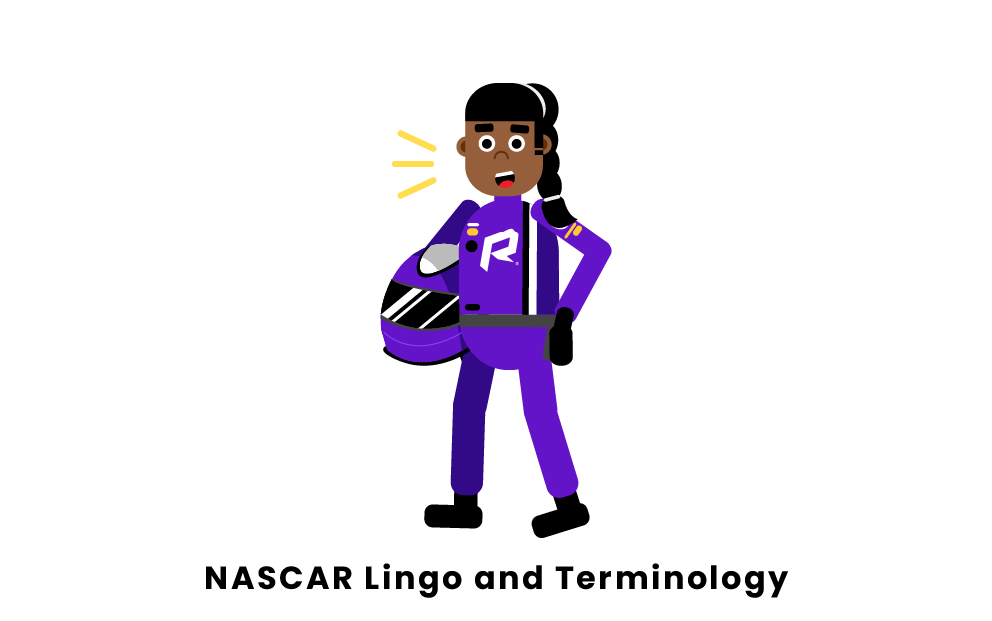 NASCAR is a sport full of technical terms and slang that makes it easier to speak about these things. These phrases and words are used by ordinary fans, in the NASCAR shops, and by car enthusiasts alike so they must be understood before they are used.

Dirty Air: Air that causes turbulence from the cars in front of a car

Downforce: A combo of forces that allow the car to grip the track

Loose: When a car struggles to grip the track

Short Pit: A pit stop that takes place far before it needs to happen for a strategic advantage

Side Drafting: Airflow causing cars to slow down next to another car

Slingshot: Using a draft to gain speed and pass cars

Wave Around: Gaining a lap on a caution, "waved around" the pace car 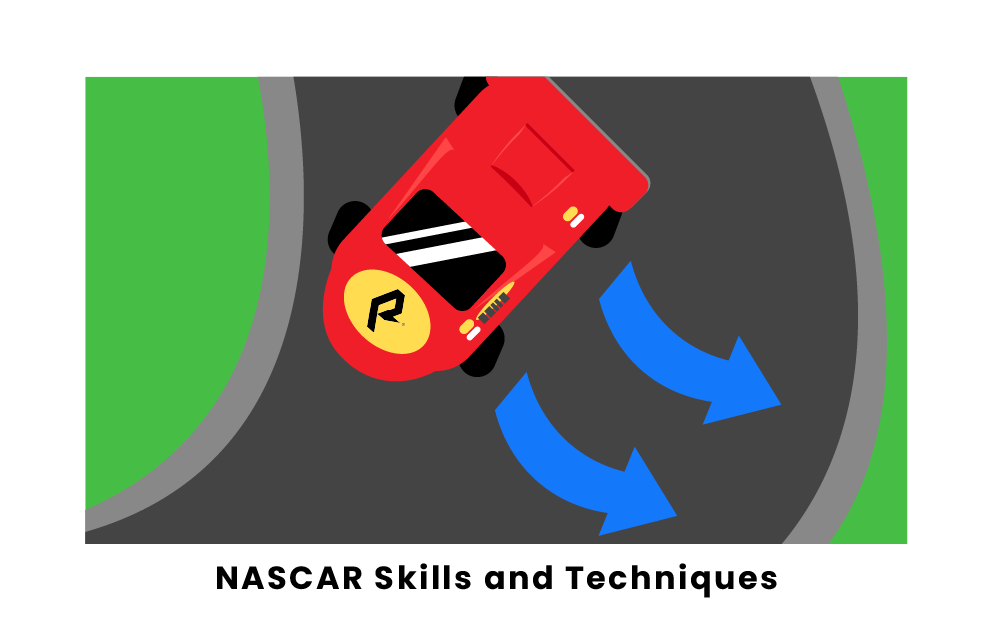 It may seem as if a NASCAR driver just drives in a circle turning left, however, there is plenty of skill involved. Drivers fight for position throughout a race using techniques such as drafting, bump drafting, side drafting, and slingshotting. Besides just drafting and passing techniques, the lines a driver takes into the corners whether high or low are also increasingly important to learn and master. The tenths of seconds gained or lost based on a line around the track and how a driver perfects this could change a race and season. 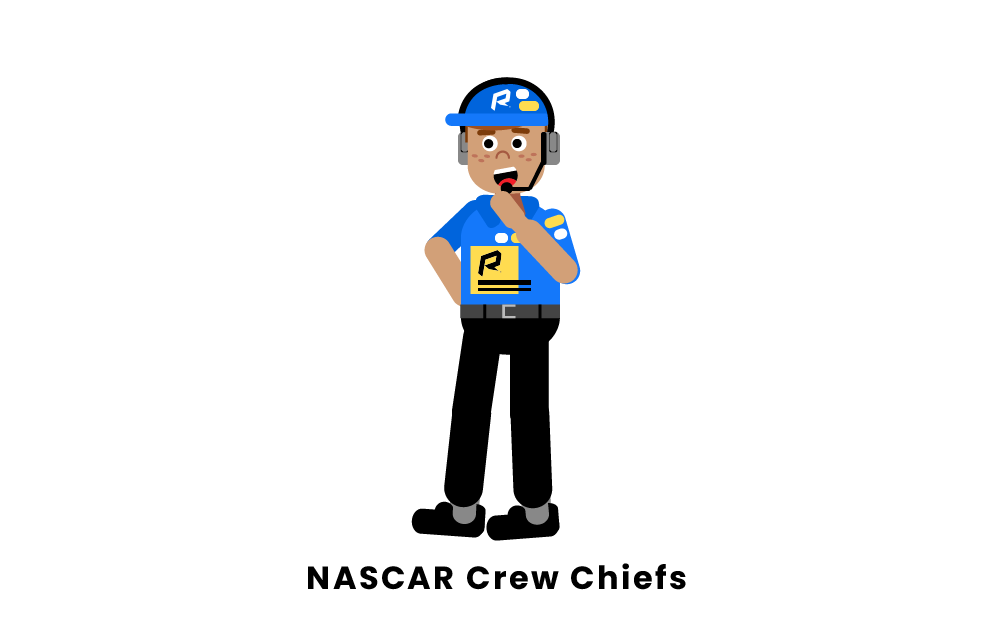 There is no one with the technical name of coach in NASCAR however the closest thing to this position is the crew chief. This individual runs the team including driver, spotter, and pit crew making tactical and strategic decisions while also motivating too. Just as the relationship between players and coaches in team sports is essential, so is the chemistry and relationship between driver and crew chief. Some of the most famous crew chiefs with their primary drivers are listed below: 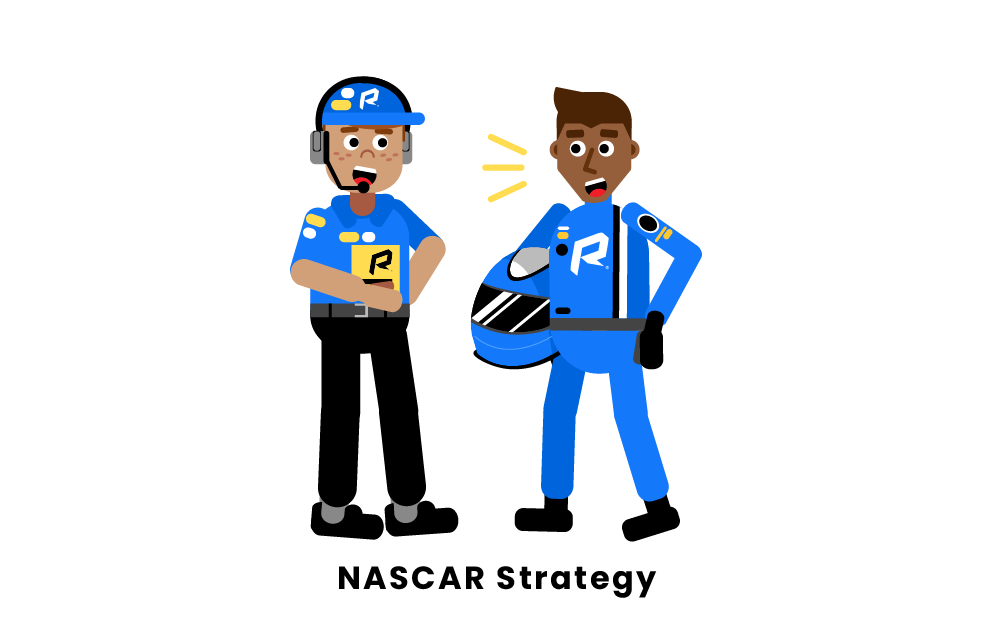 NASCAR has many different elements of strategy that influence a race. Besides on-track skills drivers use and employ, a main strategy element involves pit stops. Within a pit stop, many choices happen that involve strategy. Whether to replace 4 tires, or just 2 and which side of the car these 2 are replaced on is the main debate during each pit stop. Planning pit stops, when they occur, and what happens during them makes or breaks a race and this strategy is essential to every team involved. 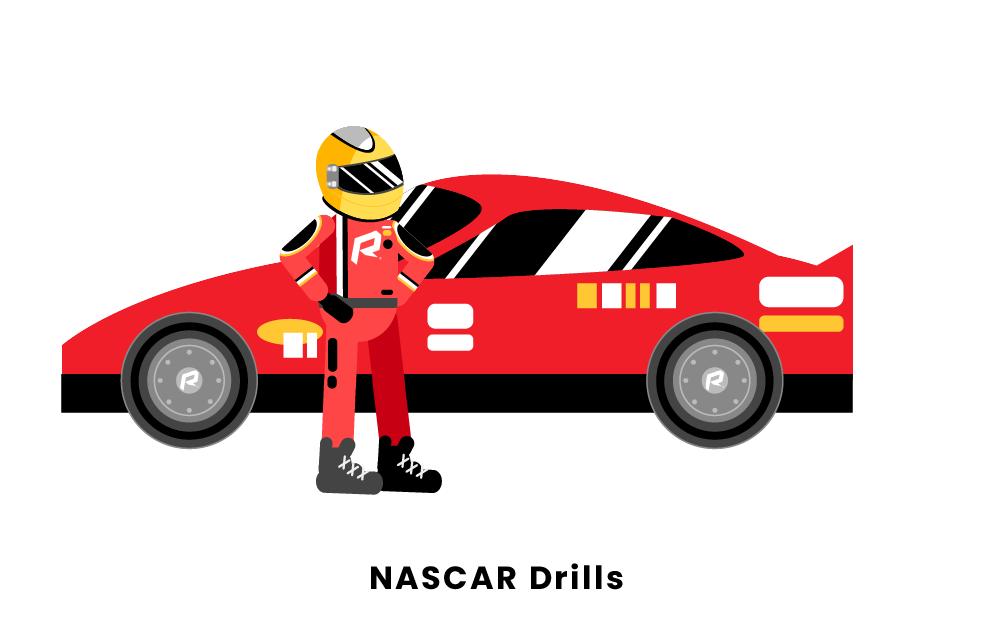 The only drill that can help a driver in NASCAR to perform better is to drive more. Because of technology advancements in recent times, virtual racing can be a good drill/practice for the real thing. iRacing is a company that has realistic practice incorporating all the tracks and many drivers drive in these simulators or own one themselves. Practicing a driver's lines on the specific tracks then translating that to the real car in practice and then into real races is the best practice a driver could get. 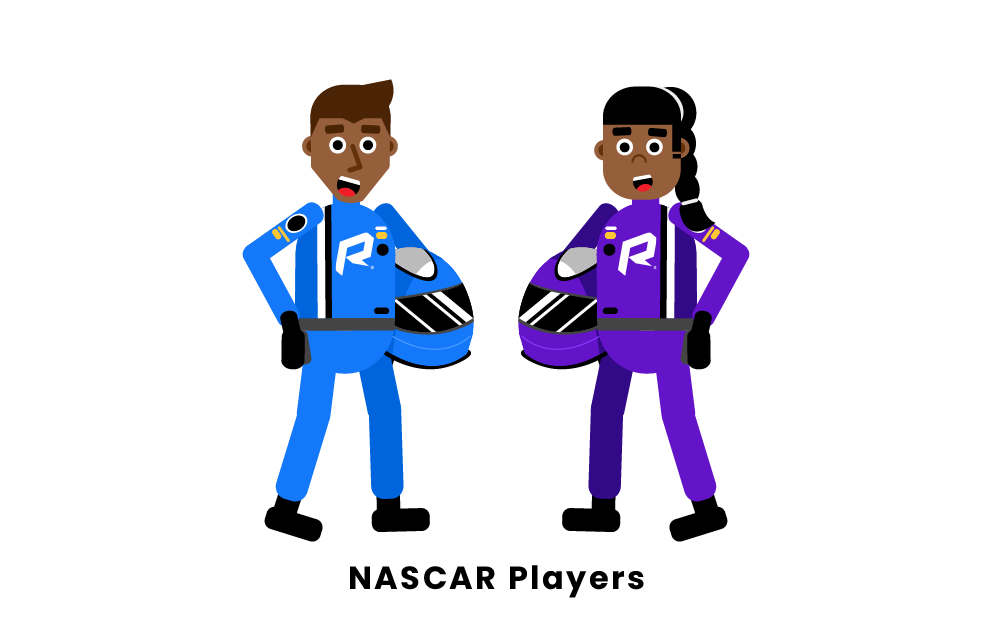 NASCAR is an individual sport and features some of the most well-known individual athletes in the world. Over the years there have been many drivers who have risen to the top of the field more often than the rest. Some of the most successful and famous drivers in NASCAR are included below with their total wins as of 2016: 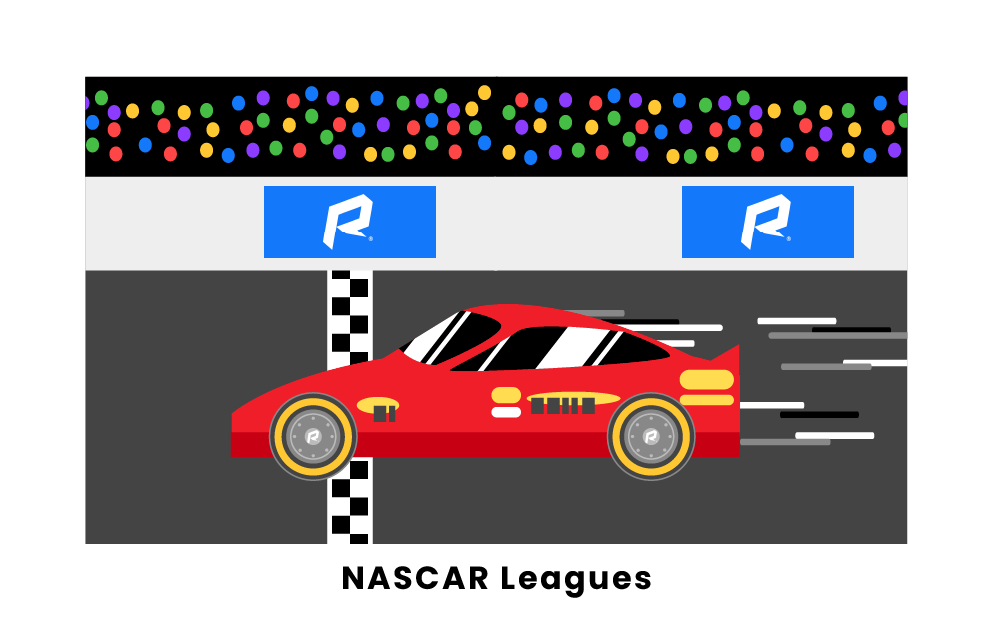 NASCAR is a sport made up of a few different levels of leagues, or Cup Series. There are a multitude of professional racing leagues around the world but for those who drive closed-wheel stock cars most dream to drive in NASCAR's top tier cup series. Here are the top few levels of NASCAR in the order of their distance from the Cup Series: 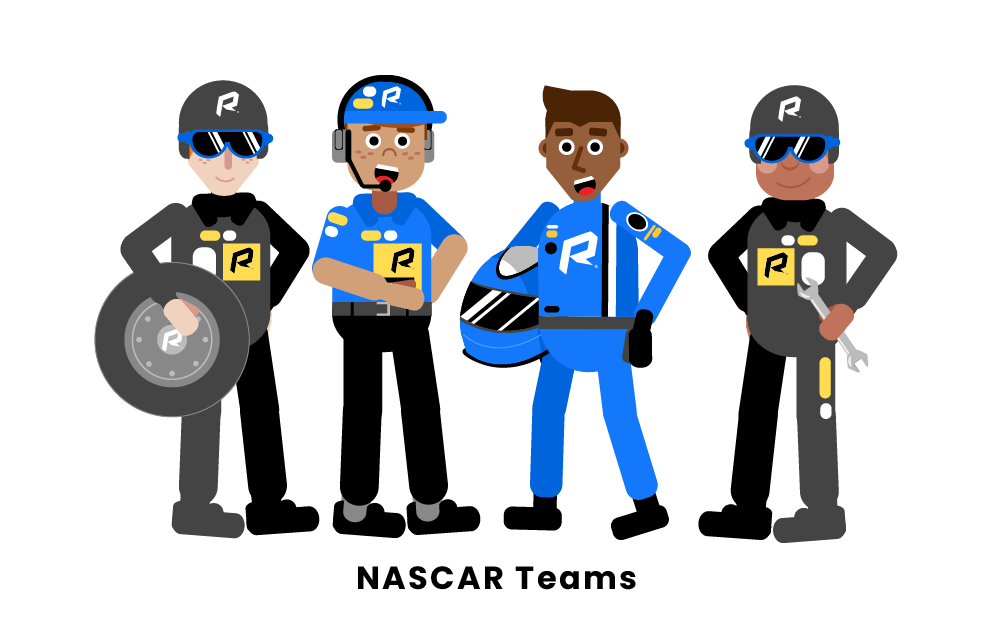 NASCAR is an individual sport however there is a team element too. 4 drivers all work and are employed by the same race team sharing equipment and knowledge. The best teams usually have the best drivers and crew teams and resources producing the most on track success. The most valuable and successful teams in the NASCAR are as follows: 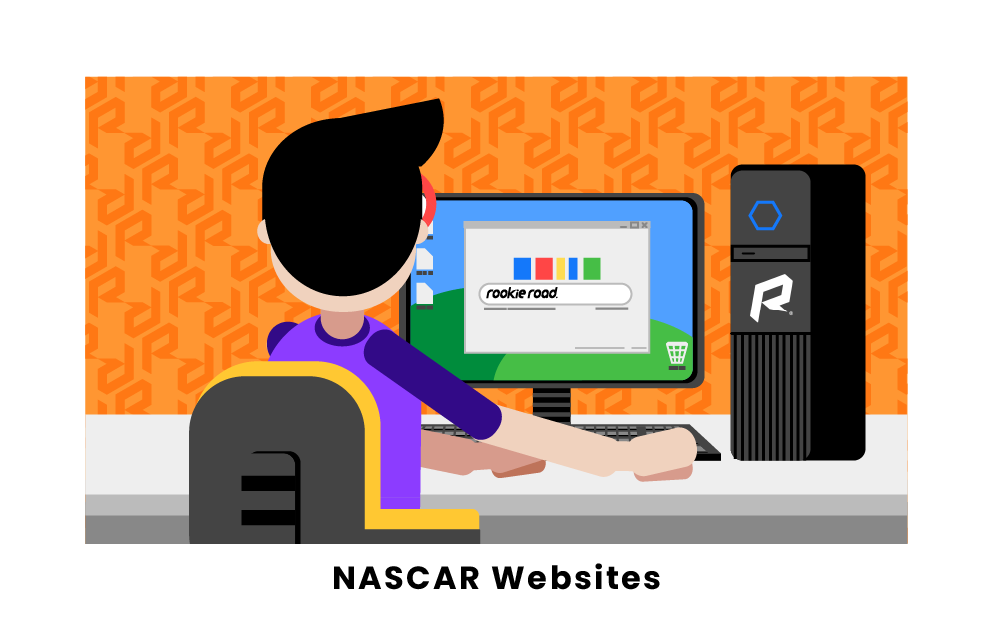 There are plenty of websites that pertain to NASCAR and the sport. Each has their own purpose and brings different things to fans, writers, and consumers alike. Below are some of the most popular sites and what they bring to the user: 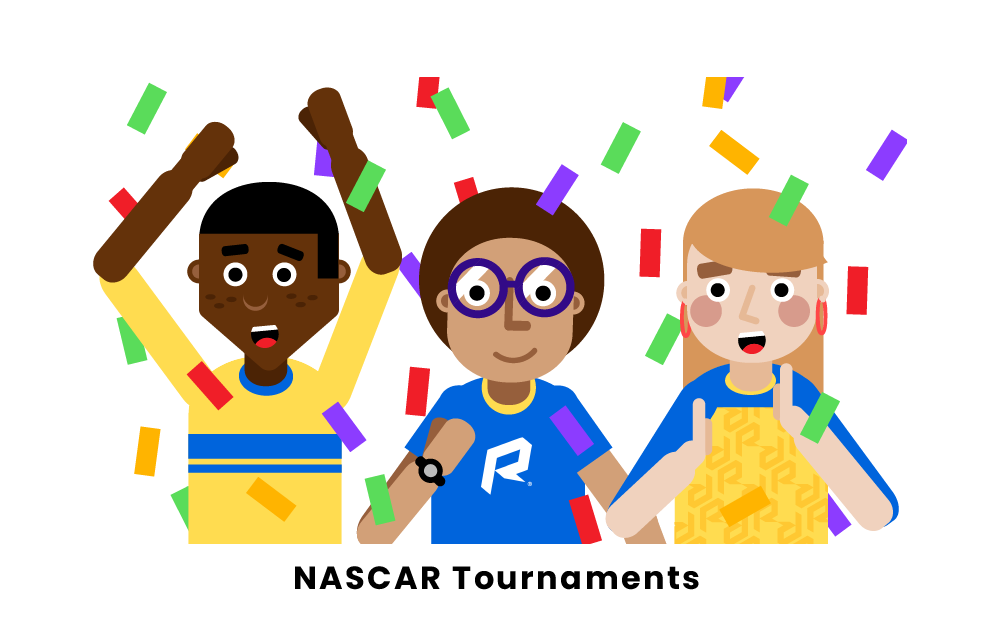 NASCAR does not have too many conventional tournaments throughout the course of the season. However, a few different circumstances could be considered to be a tournament-style event including those on the list below: 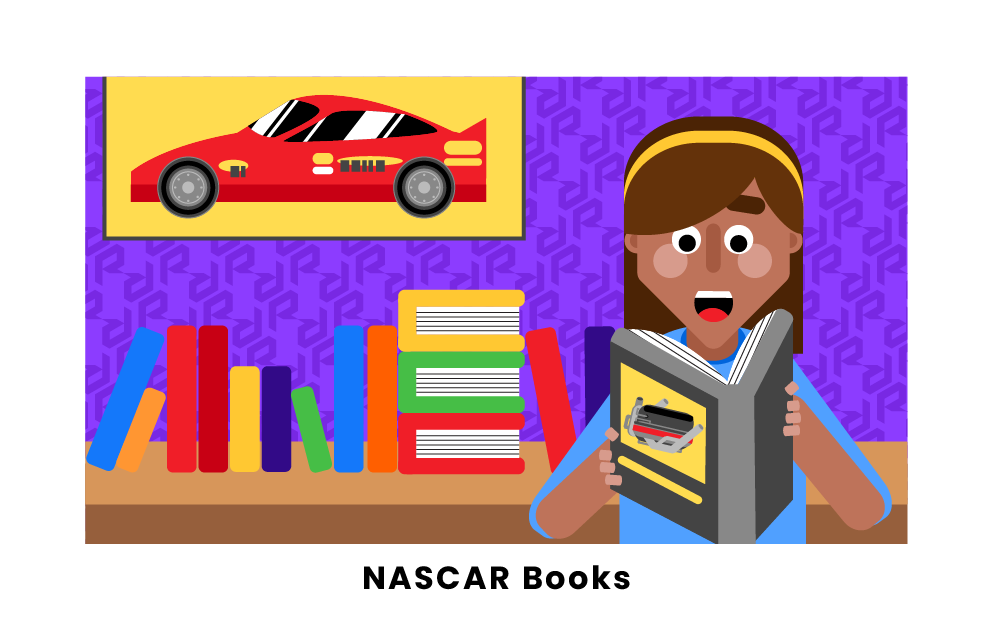 There are plenty of titles and reading options to gain knowledge on the sport of NASCAR. Many of these books are nonfiction biographies on drivers, crew chiefs, or accounts of races, seasons, or teams. There are also some fiction options that are dramatized or based on real events too. Here are several of the most popular books:

NASCAR is the National Association for Stock Car Auto Racing. It is the premier racing circuit in the United States and the world for closed-wheel racing. The Cup Series is its highest level and has over 30 races with over 40 drivers.

Most NASCAR drivers do not wear diapers during the race. However, most drivers like Brad Keslowski or Dale Earnhardt Jr. state that they do not have to go during the race almost ever. If the time comes, then the time comes and drivers will just go without a diaper but these instances are rare.

What TV network is NASCAR on today?

FOX Sports owns the rights to NASCAR races on TV through the 2024 season. Most of these races take place on FOX Sports 1 with some also on FOX depending on the notoriety of the race. Also, NBC airs some of the races throughout the season as well.

Who are the richest NASCAR drivers?

NASCAR drivers who are at the top of the sport generate millions of dollars each and every year for themselves and their teams. The most valuable drivers of all time include Dale Earnhardt Jr. ($300mil), Jeff Gordon ($150mil), Jimmie Johnson ($120mil), and Ken Schrader ($75mil). Most of the most valuable drivers are modern drivers as revenue from the sport has jumped in modern times.

Pages Related to What is NASCAR?