What Is The NASCAR Truck Series? 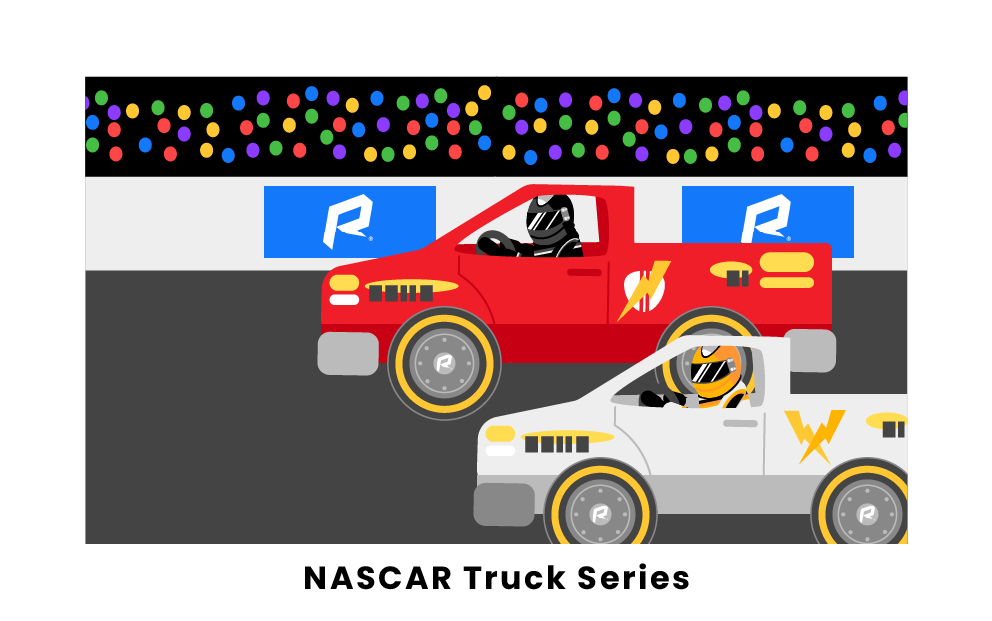 NASCAR Truck Races are held on some of the same tracks as NASCAR’s other series, but they are run in modified pickup trucks rather than stock cars. But what are these trucks, and how do they fit into the NASCAR hierarchy? What is the NASCAR Truck series? Find the answer below, plus more information on NASCAR’s national series featuring the youngest and hungriest drivers.

From the beginning, the Truck Series has been NASCAR’s third-tier national series, functioning as a training ground and feeder system for young drivers hoping to advance to the top series, as well as a place to earn a living for veteran drivers without an Xfinity or Cup Series ride. The Truck Series was originally conceived in 1991 by a group of off-road desert trophy truck racers from the SCORE racing series, including Jimmy Smith, Frank “Scoop” Vessels, Dick Landfield, and Jim Venable.

After a few years of constructing prototype trucks, conducting demonstration races, and generating enthusiasm from NASCAR fans, the SuperTruck Series was launched in 1995. The inaugural race, the Skoal Bandit Copper World Classic, was held on February 5th, 1995,  and was won by Mike Skinner. The following season, the name was changed to the Craftsman Truck Series to reflect the naming sponsor.

Early in its history, the Truck Series became known as a breeding ground for talented young drivers who were destined for NASCAR’s higher series. Famous Cup Series drivers such as Kevin Harvick, Kyle and Kurt Busch, Greg Biffle, Jamie McMurray, and Carl Edwards all made their national NASCAR debuts in the Truck Series. Over time, the series has also become a landing pad for former Cup Series drivers who can no longer field a ride at the highest level. Such drivers include Todd Bodine, Ted Musgrave, Ricky Craven, Jack Sprague, Jimmy Spencer, and Rich Bickle. The most successful Truck Series driver of all time is Kyle Busch, with 61 wins in the series.

Like the stock cars used in NASCAR’s Cup and Xfinity Series, the modified pickup trucks driven in the Truck Series are bespoke race machines, bearing little resemblance to the road-going production trucks with which they share their nameplates. The manufacturers (Ford, Chevrolet, and Toyota) provide the engines, as well as front and rear body panels styled to evoke their particular brands. Everything else, including the tube-frame chassis and sheet steel side panels, is fabricated by the race teams and dedicated race suppliers. Many components of NASCAR trucks are designed to be affordable for teams, most notably the low-tech, easy-to-maintain, carbureted pushrod V8 engines.

The Craftsman Truck Series schedule is made up of 23 races, beginning with the NextEra Energy 250 at Daytona International Speedway in February and culminating with the NASCAR Craftsman Truck Series Championship Race at Phoenix Raceway in November. The Truck Series ran primarily on short tracks in the Western United States during its early seasons. Today, however, nearly every race on the schedule takes place at the same tracks, on the same weekends, as the Cup and Xfinity Series.

Beginning with the 2016 season, the Truck Series has determined the drivers’ championship using a playoff structure similar to the Cup Series’s Chase for the Championship. Following the sixteenth race of the season (Richmond), the playoffs begin. Ten playoff spots are filled by first giving one to each full-time driver who won a race, then filling the remaining spots with the drivers who have the most regular-season points.

After this point, playoff drivers compete for playoff points, which can be earned by winning a stage, a race, or the regular-season championship. After three races, the two drivers with the least amount of playoff points are eliminated; after three more races, the bottom four are likewise culled. Then, at the Championship 4 finale at Phoenix Raceway, the best finisher among the remaining four playoff drivers is crowned the Craftsman Truck Series drivers’ champion.

Pages Related to What Is The NASCAR Truck Series?