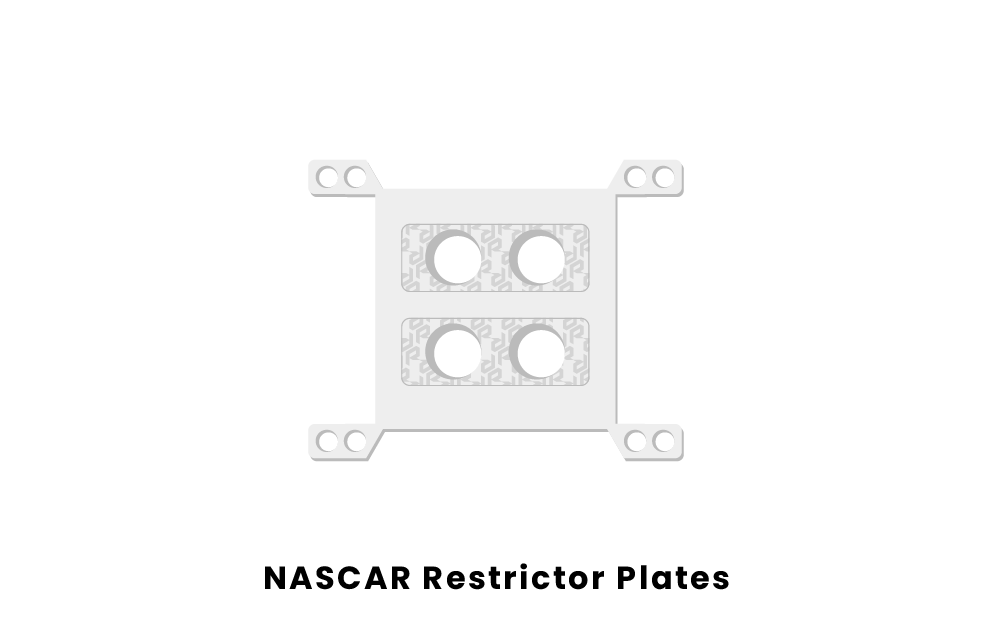 What is a Restrictor Plate?

Restrictor plates are square-shaped pieces of aluminum with four one-inch holes. They were placed inside a car’s engine to regulate the amount of air and gasoline that the carburetor (which burns gasoline) and intake manifold (which distributes air) can use to create high pressures that allow for greater speeds.

What Is a Restrictor Plate Used For?

While they were used in NASCAR, the usage of restrictor plates was all about ensuring drivers’ safety on race day. Restrictor plates helped to counter the increased aerodynamics of modern race cars, preventing the cars from achieving a level of speed and horsepower that would be extremely dangerous for all drivers on the race track.

When Were Restrictor Plates Introduced to NASCAR?

Restrictor plates were first introduced in 1987 following a crash at Talladega Superspeedway that saw driver Bobby Allison and his vehicle get launched into the fencing along the track. They were removed from NASCAR competition in 2019, when they were replaced by tapered spacers.

Why Did NASCAR Use Restrictor Plates?

Realizing that such accidents could be prevented if cars weren’t able to reach speeds of over 210 miles per hour, NASCAR officially mandated that restrictor plates be used to decrease speeds at both Talladega Superspeedway and Daytona International Speedway. The committee chose to limit the usage of restrictor plates to these two tracks because Talladega and Daytona are much longer than most other NASCAR tracks (approximately 2.5 miles per lap) and contain a number of sharp turns that make extremely high speeds more dangerous.

The New Hampshire International Speedway was a third racetrack that later required cars to have restrictor plates attached to their engines, a decision which was made due to two tragic accidents that occurred at one of the site’s races.

A tapered spacer had already been in use to limit horsepower at all tracks since 2015. However, the 2019 rules change added a second tapered spacer at superspeedway tracks, replacing the restrictor plate.

What do the holes in a restrictor plate do?

The holes are a crucial element to restrictor plates, as they allow just enough fluid to pass through and into the engine chamber, enabling race cars to perform at just below their maximum potential.

The two race tracks that required the usage of restrictor plates (Talladega and Daytona) are widely considered to be among the most challenging tracks in all of NASCAR. Drivers could not rely solely on speed during these races and instead were required to drive strategically and patiently at times in order to secure a victory.

Why were restrictor plates important?