What Are The Types Of Cars In NASCAR? 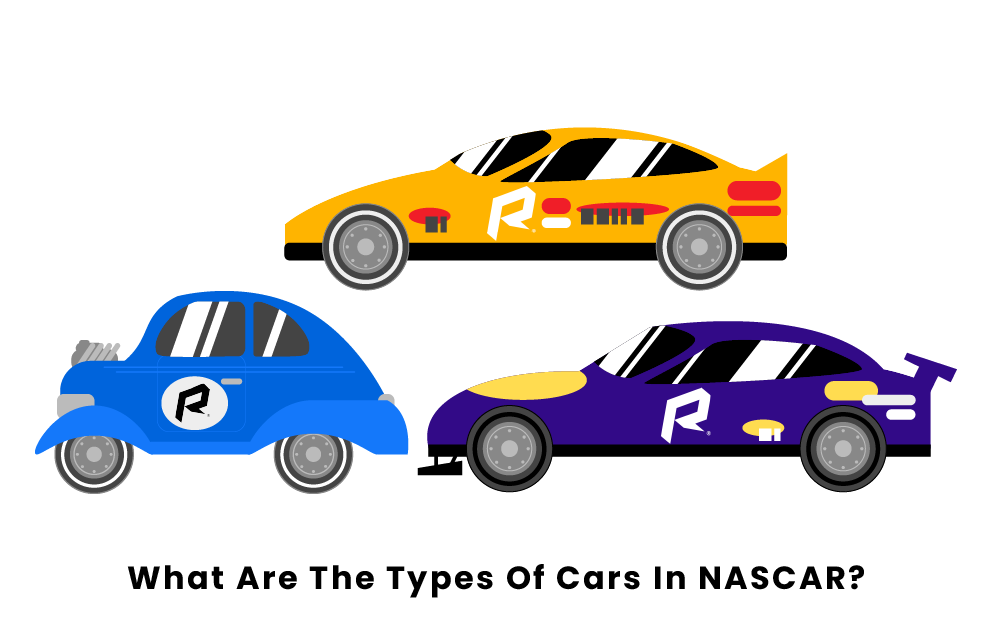 The cars featured in NASCAR races are what make the sport distinctive. NASCAR race cars feature flashy colors and eye-catching designs. Constant advancements in engineering and technology make them increasingly effective tools for the amazing athletes that NASCAR drivers use in competition. However, many don’t know the background behind these cars: how they are made, what makes them different from street legal cars, and the differences between different race cars.

Making its debut for the 2022 Cup Series season, the Generation 7 car is the current generation of stock cars used in NASCAR races. The three models of cars used as nameplates in the series are the Ford Mustang, Chevrolet Camaro, and Toyota Camry. The three manufacturers design and build their own engines. However, in a first for the Gen-7 car, the chassis, bodies, and most parts are manufactured by independent single-source suppliers. The decision to use a single supplier for these items is part of a greater initiative to keep costs down in the Cup Series in the interest of greater parity.

Notable changes from the Generation 6 car include greater chassis rigidity and larger, 18-inch wheels and tires which are meant to evoke the ones on the street cars with which the Generation 7 cars share their nameplates. Although the chassis, transmissions, and bodies were completely redesigned for the Generation 7 cars, the engines are the same 5.86 liter V8 pushrod models that were used in the previous generation’s cars. Many speculate that this decision was made to facilitate the adoption of hybrid or electric power plants mid-generation.

The Generation 6 car was used by NASCAR from 2013 until 2022. The design behind this specific generation had an interesting motive behind it; this car was designed to more closely resemble the street-legal versions released by the manufacturers.

The brands of NASCAR Generation 6 cars were Ford, Chevrolet, and Toyota. However, these brands all used their own specific model. In 2012, Ford released its decision to use the second generation of the Ford Fusion, Toyota elected to continue using the 2013 edition Camry, and Chevrolet decided to use the Holden Commodore GM rebranded as the Chevrolet SS. These new additions to NASCAR replaced predecessors such as the 2012 Dodge Charger (Dodge initially planned to use the Charger for Generation 6, however, ended up withdrawing from NASCAR due to unsuccessful attempts to get others to switch to their car), the 2012 and 2008 Chevrolet Impalas, and the 2010 Toyota Camry from Generation 5.

As the years passed, Ford, Toyota, and Chevrolet all updated their models for their Generation 6 cars. Toyota updated the body of their stock car to match the 2015 Camry and then later to the 2018 Camry. Chevrolet updated its car to the 2018 Camaro ZL1. Ford replaced the Fusion with the Mustang GT.

There are many key differences between this generation and Generation 5. These cars had aero adjustments, as well as many safety features. These safety features included roof bars and an increase in the size of roof flaps to prevent cars from flipping. Despite this, there have still been instances of flips with Generation 6 cars. Other additions include the use of Carbon Fiber and Kevlar to make up the hood and deck lid, as well as the incorporation of a digital dashboard (this was the addition that made these stock cars more similar to street legal vehicles).

This generation of NASCAR stock cars was originally planned to be retired after 2020. However, the release of the Generation 7 car was postponed until 2022 due to complications as a result of the Covid-19 pandemic.

The newest generation of NASCAR stock cars introduced many new features, but what were the previous generations like?

Generation 1 included cars such as the 1955 Hudson Hornet and 1965 Ford Galaxie. This generation of cars actually included doors that had to be strapped shut during races, as regulations required cars to have a stock car frame and body. These cars had a rear axle designed to prevent flips, but they were still dangerous, and many accidents occurred.

Generation 2 of NASCAR stock cars kept the stock body but had a modified frame. This generation included cars such as the 1967 Ford Fairlane, the 1973 Dodge Charger, and the 1979 Chevrolet Monte Carlo.

Generation 3 reduced the wheelbase of the cars. The cars were also downsized to minimize differences between the stock cars and the ones on showroom floors. This generation included cars such as the 1981 Buick Regal, 1985 Ford Thunderbird, 1987 Pontiac Grand Prix, and the 1981 Chevrolet Lumina.

Generation 4 included molded fiberglass used for the bumper and nose, as well as a heavily modified body. The cars used in this generation of NASCAR included the 1995 Chevrolet Monte Carlo, the 1998 Ford Taurus, the 2006 Ford Fusion, and the 2001 Dodge Intrepid.

Generation 5 introduced a new era of safety, as well as new aero adjustment options made possible by the front splitter and rear wing.

Throughout the years, the NASCAR stock car model has been continuously critiqued, adjusted, and improved as technology advances as well as the sport itself. This incorporation of technology makes NASCAR one of the sports with the most potential for evolution and improvement in the future in terms of both entertainment and safety for the drivers. This is one of NASCAR’s biggest strengths as a sport.

Which generation of NASCAR stock car is the best?

This answer depends on the quality that is being judged. The safest car would undoubtedly be Generation 7. The car that changed the sport for the better the most would be Generation 5. The most influential would be Generation 1. However, ESPN actually has an answer to which generation is best: the Generation 2. This is due to the modified frames that improved the overall racing, without sacrificing the body of the cars that didn’t leave a lot of difference between them and the showroom counterparts. Another contributing factor to this was that these cars were relatively safe considering how early this generation was, and even beat out later generations in terms of safety.

Which generation of NASCAR stock car is the worst?

Once again, there are several answers to this question. Generation 1 could be considered due to the lack of technology, and Generation 6 could be considered due to its heavy criticism from the public. However, ESPN ranks Generation 4 as the worst generation, due to the fact that manufacturers were allowed to make cars that had no resemblance whatsoever to their namesakes. These cars were incredibly dangerous, as they could be easily damaged compared to previous generations.

Who were the famous drivers of each generation?

As one might expect, despite the extreme evolution that the sport of NASCAR undergoes as time passes, drivers of the past who found success are still respected and revered as champions of the sport today. Generation 1 hosted esteemed legend of early NASCAR, Fireball Roberts. Generation 2 included famous drivers like Richard Petty, David Pearson, and Cale Yarborough. Generation 3 had the likes of Dale Earnhardt, Darrell Waltrip, and Bill Elliot compete. Generation 4 included Jeff Gordon, while Generation 5 included Kyle Busch and Tony Stewart. Some notable Generation 6 drivers include Martin Truex Jr. and Kurt Busch. Top Generation 7 drivers are Kyle Larson, Chase Elliott, and Joey Logano.

What are the most famous cars in NASCAR history?

Jimmy Johnson’s Lowe’s Chevrolet is a modern day icon, due to his outstanding success since he began competing in NASCAR in 2002. The No. 21 Ford, owned by the Wood Brothers, has had a long list of successful drivers, including A.J. Foyt, Neil Bonnett, Glenn Wood, Cale Yarborough, and David Pearson. Jeff Gordon’s DuPont Chevrolet is well known for its part in his historic career, similar to Dale Earnhardt’s Goodwrench Chevrolet, and Richard Petty’s STP Dodge Charger.

Pages Related to What Are The Types Of Cars In NASCAR?