What Are The Biggest Races In NASCAR? 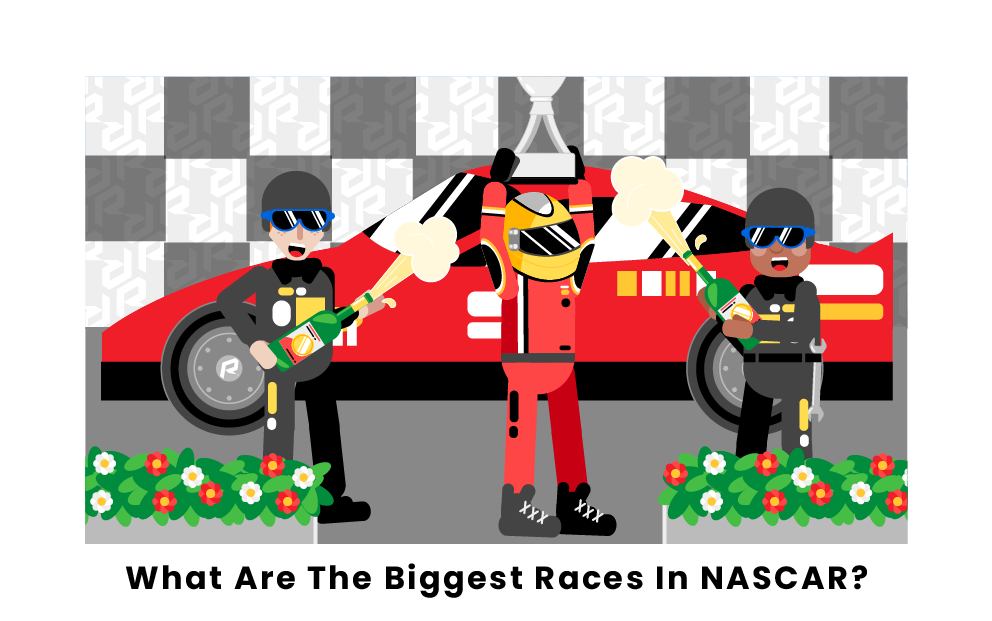 The biggest races in NASCAR are the Daytona 500, Coca-Cola 600, Cook Out Southern 500, and the NASCAR Cup Series Championship Race. The Daytona 500 is the first regular-season race each year, whereas the NASCAR Championship Race is the last race of each season. The Coca-Cola 600 is held over Memorial Day Weekend in late May, which is roughly one-third of the way through the season. Along with the Brickyard 400, the Daytona 500, Coca-Cola 600, and Southern 500 were once known as NASCAR’s crown jewels. When the Brickyard 400 was changed to the Verizon 200 in 2021, it lost its crown jewel status. Keep reading to find out about the biggest races in NASCAR today, including their history and when to watch them.

The Daytona 500 is held every February at Daytona International Speedway in Daytona Beach, Florida. The race is the most prestigious and important race in the NASCAR season and has opened up the NASCAR season every year since 1982. It is one of two races held at Daytona International Speedway every season, with a 400-mile race concluding the regular season. As the name suggests, the Daytona 500 is a 500-mile race, which is 200 laps at the Daytona Speedway, since one lap is 2.5 miles. The most successful driver in Daytona 500 history is Richard Petty, who won the race seven times.

Despite the storied and celebrated history of the Daytona 500, one of the most tragic events in NASCAR history occurred at the 2001 race, when legendary driver Dale Earnhardt Sr. crashed into the wall in the final lap and later died due to injuries sustained in this crash.

The Coca-Cola 600 is held annually at Charlotte Motor Speedway in North Carolina on the Sunday of Memorial Day Weekend. At 600 miles, the race is the longest of the NASCAR season, and it takes 400 laps to complete the race on the 1.5-mile race course at Charlotte. The race is also unique for its start time, around 6:30 PM local time, which causes the race to begin in daylight but concludes after the sun has set. The first Coca-Cola 600, then called the World 600, was held in 1960, shortly after Charlotte Motor Speedway was completed, and was won by Joe Johnson. Darrell Waltrip has won the race the most times, with five career victories at NASCAR’s longest race.

What is the Cook Out Southern 500?

NASCAR’s first race of the playoffs, the Cook Out Southern 500 is a favorite among drivers and fans alike. Held at the classic 1.3-oval at Darlington Raceway in South Carolina, the Southern 500 has been held since 1950, making it one of NASCAR’s oldest races. The track is infamous for its unique format of asphalt corners and slightly banked straightaways, making for an exciting and aggressive racing experience. Jeff Gordon is the most successful driver in the Southern 500, winning the race an incredible six times. The Southern 500 is held the first weekend in September. Even though the importance of former crown jewel races has waned, drivers still consider the Southern 500 one of the most important races on the schedule and covet a win there just as much as at the other majors.

What is the NASCAR Cup Series Championship?

The Cup Series Championship is the final race of the season and is held in early November. The race is typically held at Phoenix Raceway in Arizona and determines the winner of the Championship for the season. This race consists of a normal amount of drivers for a NASCAR race but the top four in the championship standings at the time of the race are the only ones competing for a championship. Phoenix Raceway is a one-mile loop, and the Championship race is 312 laps and 312 miles long. Joey Logano won the championship race in 2022, driving for Team Penske. He also won the playoffs and was crowned the NASCAR Cup Series Champion for that season, earning that honor for the second time in his career.

The most successful drivers in NASCAR history in terms of championships won are Richard Petty, Dale Earnhardt Sr., and Jimmie Johnson, who have each won seven championships in their careers. As of 2022, Kyle Busch and Joey Logano are the only active drivers with multiple career championships, both having won two.

Who has won the most Daytona 500 races?

Richard Petty is the most successful driver in Daytona 500 history, winning the event seven times over the course of his career, nearly double as much as the second most successful driver, Cale Yarborough, who won the race four times. As of 2022, Denny Hamlin has won the most Daytona 500 races of any active driver, with three wins. Rookie Austin Cindric won his first career Cup Series race in the 2022 Daytona 500, as this was his first race for Team Penske.

Why is the Daytona 500 so important?

The Daytona 500 is an important race because of its long history in racing sports. Daytona Beach has been considered “The Birthplace of Speed” ever since two people argued over who had a faster horseless carriage in 1903. This argument turned into a race between the two carriages on Daytona Beach along the Atlantic Coast of Florida. Daytona Beach became a center of racing after this, and Daytona International Speedway was built as a 2.5-mile tri-oval racecourse in 1959. The first Daytona 500 was held on February 22 of that year and was won by Lee Petty in a close finish against Johnny Beauchamp.

Who has won the most NASCAR Cup Series Championships?

Pages Related to What Are The Biggest Races In NASCAR?