What Are Songs That Mention NASCAR In Them? 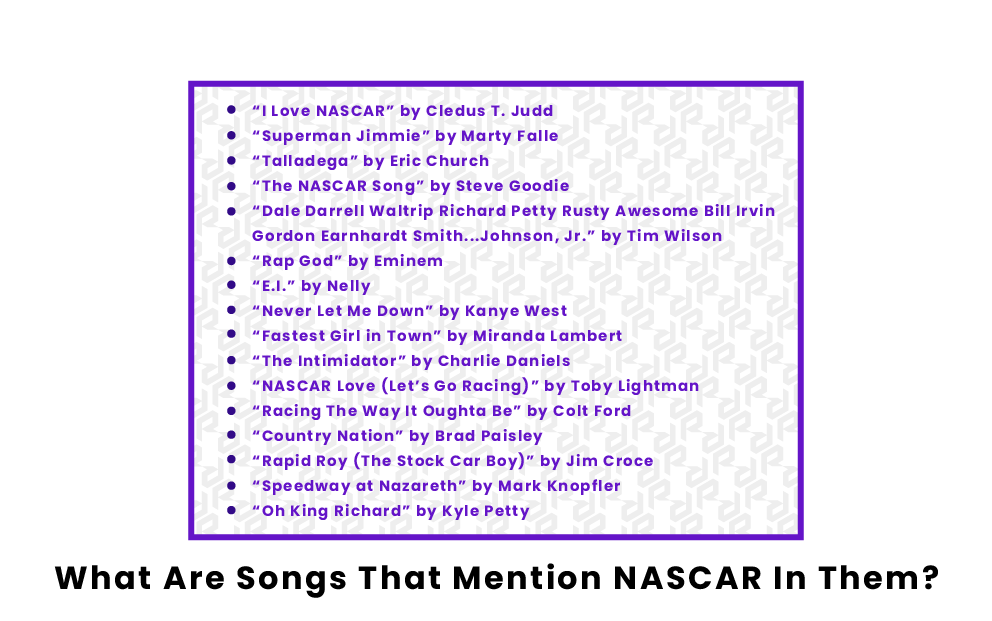 NASCAR has been mentioned in numerous chart-topping songs since its rise to popularity. In today’s culture, the entertainment and sports industries are closely linked. We see interactions between athletes and artists on a regular basis. Even more frequently, songwriters and artists will include references to popular sports or athletes in their songs. The connection between NASCAR and music can be found in varying genres, including hip-hop, rap, country, rock & roll, pop, and more.

Here are several of the most popular songs to mention NASCAR or its drivers:

“I Love NASCAR” by Cledus T. Judd (2004) - Originally a country parody song, “I Love NASCAR” ended up being Judd’s highest charting song. The song slightly makes fun of NASCAR, its drivers, and the themes surrounding the sport. The song references NASCAR pit stops, advertisements, trophy girls, and more! “I Love NASCAR” is a fun and humorous tribute to the sport from the fan’s perspective.

“Superman Jimmie (NASCAR Square Dance)” by Marty Falle (2018) - This is a unique song dedicated to NASCAR driver Jimmie Johnson. The song is about Johnson’s overall career and success in the sport, from his greatest career victories to the crash that almost killed him. This recent country hit is filled with NASCAR references in the form of a catchy square dance.

“Talladega” by Eric Church (2014) - The title of this song is based on one of NASCAR’s most iconic tracks, the Talladega Superspeedway in Talladega, Alabama. The country song is about more than just the speedway itself, but mentions the environment, turns, and checkered flags waving at the track. This ode to NASCAR and the Talladega Superspeedway is extremely popular amongst NASCAR fans.

“The NASCAR Song” by Steve Goodie (2008) - This song summarizes what goes on in a NASCAR race relatively simply with its lyrics, “Go straight, take a left, take a left, go straight.” While most of the song pokes fun about the simplisticness of NASCAR, it is certainly catchy (and relatively truthful). “The NASCAR Song’s” upbeat country tempo keeps fans singing along throughout.

“Dale Darrell Waltrip Richard Petty Rusty Awesome Bill Irvin Gordon Earnhardt Smith...Johnson, Jr.” by Tim Wilson (1997) - This is perhaps the most NASCAR focused song on our list. Wilson narrates the life of growing up in a NASCAR family in a humorous country hit. From being at the track from a young age, to getting his first car, to even competing in races. Its hilarious chorus and title reference the names of some of the greatest NASCAR drivers in history. The song perfectly embodies the fun, excitement, and passion surrounding NASCAR and its dedicated fans.

“Rap God” by Eminem (2013) - Eminem’s Rap God was a hit at its release and although it isn’t focused on NASCAR, he mentions the sport and shouts out legendary driver Dale Earnhardt in the song. The lyrics in the chorus go, “The way I’m racing around the track, call me NASCAR, NASCAR. Dale Earnhardt of the trailer park, the white trash god.” Although a bit offensive, a mention from the likes of Eminem is certainly positive publicity for NASCAR. Some fans however, may question if he is worthy of relating himself to the great Dale Earnhardt.

“E.I.” by Nelly (2000) - While Nelly doesn’t directly reference NASCAR in this song, he does shout out Jeff Gordon, one of NASCAR’s top drivers. The song’s lyrics say, “I drive fastly, call me Jeff Gordon,” referencing Gordon’s reputation for being a speed demon in the sport. This hip-hop song was a hit for years after its release.

“Never Let Me Down”

“Never Let Me Down” by Kanye West (Feat. JAY-Z & J. Ivy) (2004) - This is another popular hip-hop/rap song that references Jeff Gordon’s greatness in NASCAR. In the song, JAY-Z says, “It's HOV tradition, Jeff Gordon of rap. I’m back to claim the pole position, holla at ya boy.” This alludes to the pole position in NASCAR, which means starting the race in first place, and Gordon’s history of winning.

“Fastest Girl in Town” by Miranda Lambert (2012) - This country song doesn’t directly mention NASCAR or its drivers, however, it does focus on a common theme that many NASCAR fans can relate to: speed. More importantly, the music video for the song features legendary NASCAR driver Danica Patrick. It is only fitting that NASCAR’s greatest female driver was a source of inspiration for Lambert’s, “Fastest Girl in Town.”

“The Intimidator” by Charlie Daniels (2007) is a song that honors the late great Dale Earnhardt in its lyrics. The track was released following the unfortunate deadly crash that took Earnhardt’s life. At the end of the song, Daniels also mentions the continuation of NASCAR royalty through Earnhardt’s son, Dale Earnhardt Jr. The final chorus goes “He's a rocker and a roller and he sure knows how to shut them down, I guess it runs in the family the intimidator's back in town.” Daniels pays tribute to Earnhardt earlier in the song by singing “The man meant business when he got behind the wheel, Eye like an eagle and nerves made of steel.”

“NASCAR Love (Let’s Go Racing)” by Toby Lightman (2008) - Country singer songwriter Toby Lightman was tapped by Fox to compose and perform the theme song for their NASCAR broadcasts during the 2008 season. Thanks to catchy lyrics referencing icons from the sport, the song has become a NASCAR anthem, even after it ceased to be used regularly in broadcasts.

“Racing The Way It Oughta Be”

“Racing The Way It Oughta Be” by Colt Ford (2009) - In a true love song to the sport, country-rap artist from Georgia describes the sights, sounds, and feelings of watching a race in person at Bristol Motor Speedway, in Bristol, Tennessee, which is one of the classic NASCAR tracks. The song’s title is taken from the unofficial slogan of the race track.

“Country Nation” (2014) is a song by NASCAR-fan Brad Paisley. Paisley mentions two famous NASCAR drivers by their numbers’ in the song. It goes “We pray before we race, Cheer fourteen and forty-eight.” Long-time NASCAR driver Jimmie Johnson drives the number 48 car, while Tony Stewart drives the number 14 car.

“Rapid Roy (The Stock Car Boy)” by Jim Croce (1972) - Better known for hits like “Bad Bad Leroy Brown,” American folk singer Jim Croce wrote this funny and ironic song about early NASCAR legend Roy Hall, a larger than life character who exemplified the outlaw moonshiners who made up most of the sport’s early competitors.

“Speedway at Nazareth” by Mark Knopfler (2000) - Mark Knopfler sings about several different NASCAR tracks in this song, ending with the Nazareth Speedway. He sings lyrics such as “Well the Brickyard's there to crucify anyone who will not learn” in reference to the Brickyard at Indianapolis Motor Speedway and “So we came to Road America where we burned up at the lake” in reference to Road America. Both of these tracks are still a part of the NASCAR Cup Series circuit.

“Oh King Richard” by Kyle Petty (1995) - Kyle Petty’s version of this loving homage to NASCAR legend Richard Petty is a cover of Rodney Crowell’s original, from the 1986 album, “Street Language.” The song is silly but earnest and the music video is a treat, featuring father and son in classic 90s garb.

Pages Related to What Are Songs That Mention NASCAR In Them?