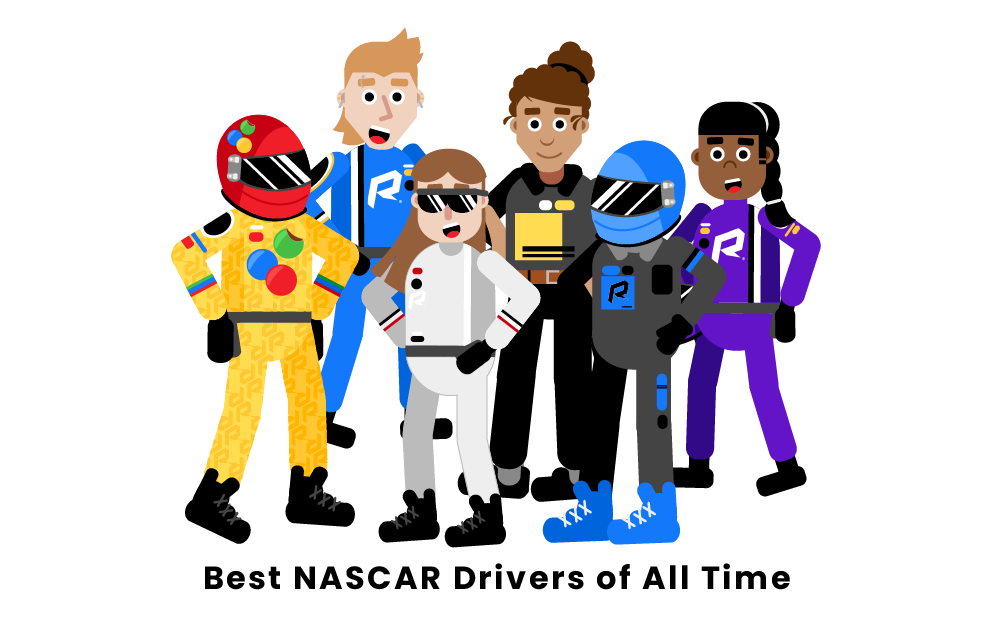 NASCAR drivers are the most famous and highly-paid motorsports athletes in North America, with their popularity growing worldwide as the sport reaches new audiences. Throughout its bootlegger-influenced history, the sport has attracted colorful characters and fierce competitors. Here is a list of the greatest to ever get behind the wheel of a NASCAR ride, along with their accomplishments, achievements, and records.

Who Are the Best NASCAR Drivers of All Time?

Known around the world as “The King,” Richard Petty was the winningest driver in NASCAR history. Behind the wheel of the Petty Enterprises No. 43 Pontiac and Plymouth, he was the first to reach seven Cup Series Championships. Petty won a record-setting 200 Cup Series races over the course of his 35-year career, with an unparalleled 27 victories coming in his 1967 season. Richard grew up in Level Cross, North Carolina, the son of NASCAR driver Lee Petty. After high school, he began working for his father’s racing company and made his first Grand National start at 21. The next season, he was named Rookie of the Year. Within a few seasons, Petty was unstoppable. Now the owner of a race team and a speed shop, Petty still holds the records for most starts at 1,184 and most Daytona 500 wins with seven.

Called “The Intimidator” because of his aggressive style of driving and overtaking, Dale Earnhardt was an icon of NASCAR in the 1980s and 90s. One of the greatest ever, his untimely death behind the wheel of his racecar transformed the sport with an increased focus on driver safety. The son of famous short track racer Ralph Earnhardt, Dale grew up in Kannapolis, North Carolina, and entered his first race at age 12 in one of his father’s cars. He quit school to pursue racing and, at 23, started in the Cup Series, winning Rookie of the Year. The next season, he won the points championship. After a few seasons, Earnhardt settled into the all-black Richard Childress Racing No. 3 Chevrolet, a car with which he will always be associated. His son, Dale Jr, was a successful NASCAR star who is now a team owner, announcer, media producer, and integral part of the sport.

The only NASCAR driver to win five consecutive Cup Series championships, Jimmie Johnson is a modern motorsports hero and a contender for the greatest in the history of the sport. Born in El Cajon, California, Johnson started racing motorcycles at age four. After high school, he raced in the MTEG and SODA off-road series before moving to stock cars, advancing from ASA late-models to the Busch Series. There, he was noticed by Hendrick driver Jeff Gordon, who recruited him to the Cup Series team. In 2006, Johnson won his first Cup Series Championship, then defended his title for the next four years, winning two more titles before retiring from NASCAR. Johnson continues to race in the IndyCar and IMSA SportsCar series, both under the No. 48, for which he has become known.

After earning the nickname “Rainbow Warrior” behind the wheel of his signature multi-colored No. 24 Chevrolet, Jeff Gordon has become a cornerstone of NASCAR, moving from television announcer to co-owner and Vice Chairman of Hendrick Motorsports. Gordon was born in California and grew up in Indiana, starting racing in a quarter midget series at age five. He earned his USAC license at 16 and won the Sprint Series Championship four years later. Gordon advanced to NASCAR, earning Rookie of the Year in the Busch Series, then moving to the Cup Series where he dominated throughout the 1990s, setting the modern-era records for most wins and most wins in a season.

Called “The Fox” because of his efficient, methodical style of driving and winning, David Pearson was one of the most successful and reliable drivers of the 1960s and 70s. This self-made driver often traded wins with Richard Petty. Only running part-time for most of his career, many speculate Pearson may have surpassed “The King” in wins had he raced full-time. Growing up in Spartanburg, South Carolina, he raced stock cars at the local dirt track. Pearson bought his own cars, working as a roofer to fund his racing. He paid for his first few seasons in NASCAR, eventually cobbling together enough team rides to run three full seasons in the late 60s, winning the championship in each season. Pearson raced part-time for the rest of his career.

A godfather of American motorsports, Bobby Allison founded the infamous Alabama Gang of NASCAR racers, centered around his race shop in Hueytown, Alabama. He grew up in Miami, Florida, and started racing against his parents’ wishes. He moved his operation to Alabama after winning a particularly high purse there in a short track race. Allison raced NASCAR throughout the 1960s, 70s, and 80s for a self-owned team. At the same time, he operated a race shop and competed in regional short track racing, as well as the Trans-Am, Can-Am, and IndyCar series. Allison is infamous for his televised fistfight with rival Cale Yarborough at the 1979 Daytona 500, an event that is credited for increasing NASCAR’s exposure and popularity at the time.

Darrell Waltrip was a premier NASCAR driver who boasts an astonishing array of victories and achievements as a driver and a well-respected reputation as a color commentator for the sport. Most notably, Waltrip made history by being the only NASCAR driver to win the Coca Cola 600 five times. This achievement is complemented by 84 Cup Series wins, three Winston Cup series titles, and his status as a member of the NASCAR Hall of Fame, as a member of the class of 2012.

Racing with NASCAR since 2004, Kyle Busch is the brother of Kurt Busch, who is also a NASCAR driver. Kyle’s career with NASCAR has resulted in a number of accolades, including a combined 224 victories across all three NASCAR series, the most race wins of any NASCAR driver. Busch won the NASCAR Cup Championship in 2015 and 2019, and was in the Championship Four for all five years of that timespan. Despite these accomplishments, however, one accolade Busch has not yet managed to rack up is a Daytona 500 win, though he came close to victory in 2019, finishing in second place.

Racing for NASCAR since 2001, Kevin Harvick spent the first 13 years of his career with Richard Childress Racing. In 2014, he switched to SHR, a racing team co-owned by former racers Tony Stewart and Gene Haas. In his first season with SHR, Harvick won his first-ever Cup Series Championship. Known for racing with the Goodwrench No. 29 Chevrolet for many years, Harvick now operates the No. 4 Stewart-Haas Racing Ford. Among Harvick’s accolades are 14 NASCAR Camping World Truck Series wins and 47 NASCAR Xfinity Series victories, for a total of 58 Cup Series wins.

Who is the best NASCAR driver of all time?

Richard Petty is the best NASCAR driver of all time. He is known as “The King” for a reason: his collection of wins, championships, and records is unmatched even to this day. Although his record of seven championships is tied with Dale Earnhardt and Jimmie Johnson, Petty holds the records for most wins, poles, career starts, wins in a season (27), consecutive wins (10), and Daytona 500 wins (7), among other distinctions. Richard Petty is a major cultural icon who continues to represent NASCAR, remaining active in the sport as a team owner.

What NASCAR driver has the most Daytona 500 wins?

Richard Petty has the most Daytona 500 wins, taking home seven victories at the race over the course of his career. Petty finished 57th in the first Daytona 500 in 1959 as his father, Lee, finished first. Richard’s first Daytona 500 win came in 1964. His most well-known Daytona victory was in 1979, called “The Famous Finish.” It involved a last-lap crash resulting in a fistfight between Donnie Allison and Cale Yarborough. He also took home the trophy in 1967, 1971, 1972, 1974, and 1975.

What NASCAR driver has the most race wins of all time?

Pages Related to Top 6 Best NASCAR Drivers of All Time