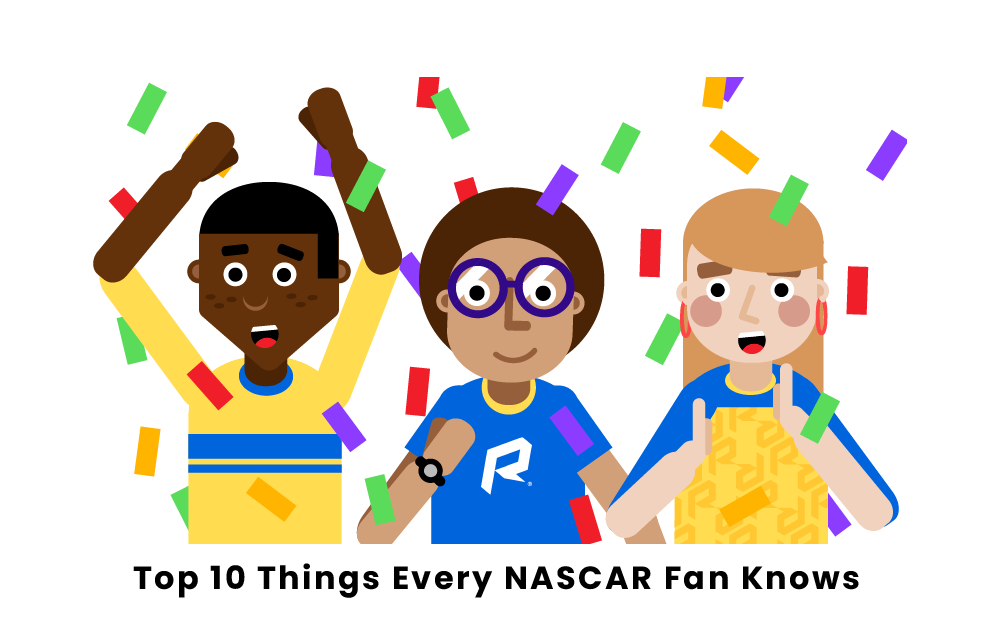 What are the most essential things that every NASCAR fan knows?

Here are some unwritten rules of being a NASCAR fan:

The one thing every NASCAR fan knows is that in racing sports, speed is king. The faster a driver goes, the more exciting the sport invariably becomes. It can be argued that speed is what draws people to the sport of NASCAR in the first place. The adrenaline that fans feel from drivers sustaining speeds of up to 200 miles per hour keeps fans glued to their seats for over 400 laps of racing. At any moment, a driver may lose what little control they have when traveling so fast, making races all the more tense and exciting. While watching the thrilling sport that is NASCAR, fans get to experience cars traveling faster than they ever would see in their daily lives, an excitement that every NASCAR fan knows all too well.

2. The Louder, The Better

Another crucial element to the excitement and thrill of NASCAR is the noise. Oftentimes during a race, the decibel level in the stadium can exceed 130dB of sustained noise. Of course, if someone is exposed to this level of noise for too long, they can suffer hearing loss. But, for most fans, the noise only adds to the experience. Hearing the loud rumble of the aluminum stands as cars whiz by adds a degree of insanity to it all, and NASCAR fans can’t get enough of it. Ear protection is certainly recommended, however, and earplugs are typically available for fans to pick up before the race starts so no one gets severe hearing impairment.

3. NASCAR Is A Family

Equally as important as the thrilling aspects of the sport, NASCAR prides itself on fostering a sense of family and community. Fans know this to be especially true, as by following a driver through their careers, fans grow a particularly strong attachment to their favorite drivers. The drivers themselves, while competitors, are always eager to congratulate and support others. Fans all cheer together, whether their driver is the one in front or not. At the end of the day, NASCAR events feel awfully similar to family gatherings, an aspect of the sport that every NASCAR fan holds dear.

While NASCAR’s history has certainly had some moments it would like to move past, fans are in agreement that the sport has steadily been moving towards a better place. Like most sports, NASCAR has attempted in recent years to leave behind its racist and sexist roots, in order to serve as a platform for women drivers like Danica Patrick and Hailie Deegan, or minorities like Mexican-American driver Daniel Suárez and African-American driver Bubba Wallace to take center stage and flourish in their careers.

Fans know that there is still progress to be made, but are quick to acknowledge that the sport has come a long way and should be respected as an inclusive and friendly environment more now than ever before.

200 Career Cup wins, and career earnings amassing over $9 million, are just a few of the legendary hallmarks of Richard Petty’s career. A true champion of the sport, Petty is considered by most fans of the sport to be the greatest driver to ever race. Richard Petty has arguably become heavily identified with NASCAR itself, with his Southern sensibilities and legendary cowboy hats. The hype is real for this guy, and fans are pretty much in agreement with this across the board.

While this statement is true for any and all stereotypes, NASCAR seems to find itself as the punching bag of the motorsport world. Yes, fans can be rowdy, brash, and outright crazy at times, but what sports fans aren’t from time to time? Saying that NASCAR drivers and fans are all uneducated and problematic is, on many levels, untrue. In fact, many drivers have degrees from top universities, and NASCAR fans are three percent more well-off financially than the general populace. Fans not only find stereotypical depictions of themselves offensive, most believe them to be outright false, and for a good reason.

Of course, NASCAR wrecks are only awesome when no one gets seriously injured or worse. While a saddening 28 drivers have passed due to wrecks throughout NASCAR’s long history, the vast majority of wrecks are exciting, destructive viewing experiences that harm no one but fans who are rooting for those drivers. When a wreck happens, there is no doubting how truly exciting it is from not just an adrenaline perspective but a game-changing one as well. To fans of the sport, there is little that brings on as much excitement as a large wreck.

8. The Earnhardts Are Legends

Never in NASCAR’s history has there been a racing family more iconic and legendary than the Earnhardts. Father Dale and son Dale Jr. may not be the sport’s most dominant drivers, but among fans they are some of the most adored. While Dale is no longer with us, the two embody some of the most crucial tenets that NASCAR stands for: family, sportsmanship, and charm. It can also be said that Dale Jr. represents a timeless era of the sport, both through his father’s career as well as his current career as a broadcaster, media personality, and race team owner. Whatever the case, fans know that this racing family is the stuff of legends.

9. Root Against the Bad Guys

NASCAR has a long history of villains, drivers who play by their own rules, ignoring alliances and sportsmanship when they sense a win is in hand. Classic NASCAR bad guys include Daryl Waltrip, Robby Gordon, Jimmy Spencer, and Tony Stewart. Some villains from the modern era are Kevin Harvick, Brad Keselowski, Joey Logano, Ross Chastain, and Kyle Busch. Fans love to root against the bad guys, and you will often hear a chorus of boos when one of these drivers is introduced before a race. Whatever you think about these drivers, there is no denying their success and they all have numerous fans and race wins.

Although sitting last on this list, NASCAR fans choose to debate this topic less so than others, not because it is unimportant but because, to them, the debate is settled. NASCAR drivers, like athletes of any sport, are indeed athletes. To fans, and to many, this is not opinion but mere assertion of fact. When others say that they feel NASCAR drivers are not athletes, NASCAR fans and drivers alike kindly point them in the direction of a few crucial facts.

NASCAR drivers sustain high G-forces for many hours and also become extremely dehydrated while exposed to hot temperatures during a race. NASCAR drivers must be in good physical condition to meet the heavy physical demands that the sport imposes on them, similarly to how, say, an NFL Quarterback would need to be conditioned for a football game. Fans know these things, which is why they pay no mind to outsiders stirring the pot.