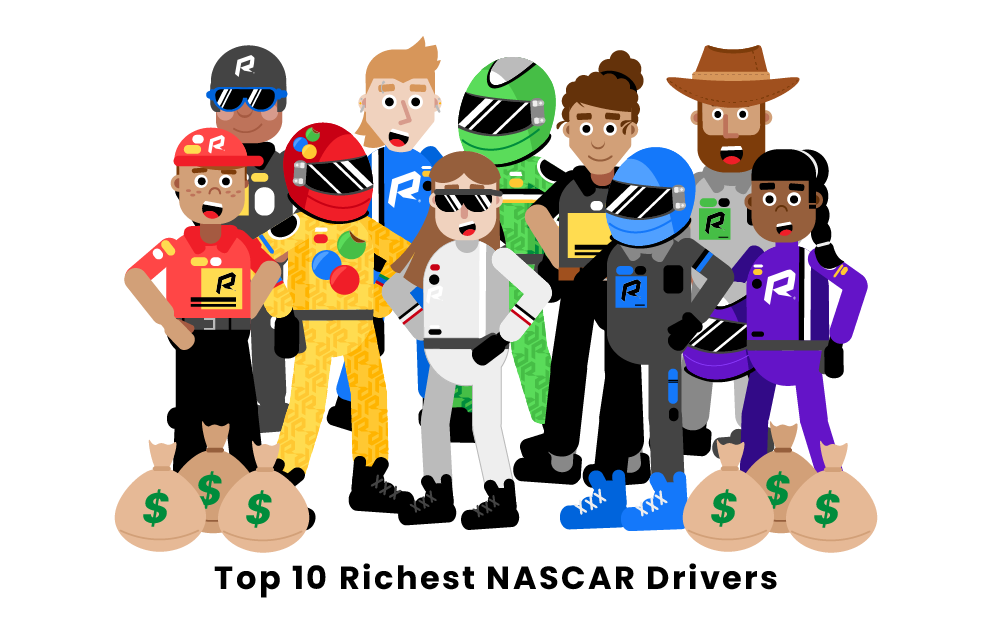 NASCAR is one of the most popular forms of stock car racing. The sport is beloved in the United States and has produced some legendary drivers. With an average of nearly three million viewers watching each race, the stars of NASCAR are unsurprisingly very well compensated for their efforts. Read on to learn more about the top ten richest NASCAR drivers.

Who are the wealthiest NASCAR drivers?

Dale Earnhardt Jr. earns the ranking of the wealthiest NASCAR driver, with an estimated net worth of $300 million. His career began in the late 90s, and he quickly became a legend in the racing community. From 2003 to 2017, racing fans consecutively selected Earnhardt Jr. as NASCAR’S Most Popular Driver. Earnhardt Jr. was the first to cross the finish line at the 2004 and 2014 Daytona 500s, and he won the 1998 and 1999 NASCAR XFINITY Series titles. Over his whole career, he has won 50 NASCAR-sanctioned races. He also owns JR Motorsports, a professional race team.

Jeff Gordon is the second wealthiest professional NASCAR driver as of 2023, with his popularity and success on the race track resulting in an estimated net worth of $230 million. He was an integral part of the sport’s rise to mainstream success, making Gordon a household name in the process. Gordon is a four-time NASCAR Cup Series Champion and a three-time Daytona 500 winner. He accumulated a total of 86 Cup Series victories during his career, ranking third on NASCAR’s all-time list. Retired on the track, Gordon is now vice-chairman of Hendrick Motorsports.

Jimmie Johnson is one of the richest professional stock car drivers, with an estimated net worth of $180 million. His success on the track proves his worth; he has won the NASCAR Cup Series seven times and is the only driver in NASCAR history to win championship titles in consecutive years. He began his career in 2002 and currently holds the record for most premier series championships, alongside Dale Earnhardt and Richard Petty. He was also named the Associated Press Male Athlete of the Year in 2009, the only race car driver ever to be awarded this title.

Tony Stewart makes the list of the top ten richest NASCAR drivers because of his estimated net worth, which totals approximately $100 million. Stewart is acclaimed for being the only driver in racing history to win a championship in NASCAR, IndyCar racing, and Silver Crown cars. He has also won three NASCAR Cup Series titles, joining the ranks of only 15 other drivers to accomplish this feat, many of whom are on this list. Steward remains active in NASCAR as the owner of the founder of Tony Stewart Racing and the owner of Eldora Speedway.

Kevin Harvick is a professional NASCAR driver with an estimated net worth of $90 million, enabling him to join the ranks of the wealthiest race car drivers. He earned most of his fortunes from his wins on the race track. He has a total of 60 career NASCAR Cup Series victories, including wins in NASCAR’s most-coveted races: the Daytona 500, Coca-Cola 600, Brickyard 400, and Southern 500. He also has two NASCAR Xfinity Series championships and 47 Xfinity series wins. Harvick was awarded the 2014 NASCAR Cup Series champion by President Obama and won an ESPY (ESPN’s Sports Award) for Best Driver.

Kyle Busch has an approximate net worth of $80 million through his successes on the race track and his own self-named motorsports racing company. Busch has had many successful runs on the race track, helping him grow his fortune. He has 60 NASCAR Cup wins and was the NASCAR Cup Champion in 2015 and 2019. Throughout his NASCAR career, Busch has had 224 victories across the three national series. Busch is also the owner of Kyle Busch Motorsports, founded in 2010, which fields successful teams in the Camping World Truck Series and the ARCA Menards Series.

Denny Hamlin earns his place on this list with a reported net worth of around $80 million, a number that is likely to keep growing. Unlike many of the other drivers on this list, Denny Hamlin remains one of the best drivers in NASCAR today. During his career, Hamlin has achieved a total of 48 wins, including Daytona 500 victories in 2016, 2019, and 2020. Although Hamlin has an impressive amount of victories to his name, he still remains without a NASCAR Cup Series crown. Nonetheless, with the majority of drivers on this list retired, Hamlin has a great shot at shooting up the rankings in the near future.

Mark Martin is estimated to be worth $75 million, primarily from his racing fortunes, but also from his business ventures centered on owning five car dealerships. He earned his spot on this list through his longtime success as a NASCAR driver. Martin has a total of 96 wins across NASCAR’s three national series. He retired in 2013, and in 2017, he was inducted into the NASCAR Hall of Fame. Martin owns and operates five car dealerships, called Mark Martin Automotives, in three cities in Arkansas. 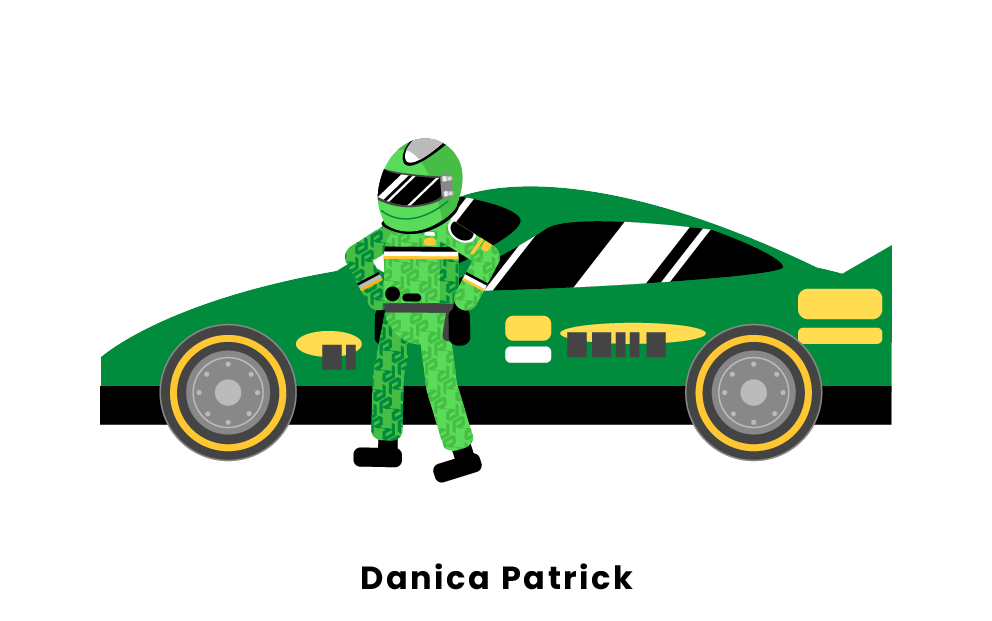 Danica Patrick has broken many NASCAR records, garnering great fame and financial profits, with a net worth of approximately $70 million. Her Cup Series career began with a strong start. In her first Indy 500 race, she led 19 laps and finished in fourth place, making Patrick the only woman to accomplish this. She continued to break more records in 2013 as the first woman to win a NASCAR Cup Series pole, setting the fastest qualifying 500 time, and proceeding to place in eighth. She also became the first-ever female to host the ESPYs. She is now retired and is the sole proprietor of a winery in Northern California.

A legend in motorsports, Richard Petty has a current net worth of approximately $70 million even after retiring from NASCAR in 1992. Richard Petty grew up watching his father, esteemed stock car race driver Lee Petty, on the track and knew he wanted to continue in his shoes. Throughout his NASCAR career, Petty started in over 1,180 NASCAR races and was victorious in 200 of those races. He won the Daytona 500 on seven different occasions. He was inducted into the International Motorsport Hall of Fame in 1997 and the NASCAR Hall of Fame in 2010.

Ken Schrader began his stock car racing career in the early 1980s and has continued his passion for racing into the present day, holding a net worth of approximately $25 million throughout his career. During his three decades in the profession, he participated in over 760 races. Schrader retired from NASCAR racing in 2013 with many wins under his belt, including the Busch Clash in 1989 and 1990 and the Daytona 500 pole in three consecutive years from 1988 to 1990. He also won multiple awards, including the 1980 USAC Stock Car Rookie of the Year, Winston Cup Series Rookie of the Year in 1985, and the National Dirt Late Model Hall of Fame Sportsman Award in 2009.

Dale Earnhardt Sr. is a legendary NASCAR driver who held a net worth of approximately $70 million at the time of his tragic passing in 2001. Earnhardt left his mark on the sport, claiming seven series championships and 76 NASCAR Cup Series victories. He also won the Daytona 500 in 1998. Earnhardt is seen as one of the pioneers of the sport and contributed to its current popularity. His legacy continues through the incredible success of his son, Dale Earnhardt Jr, and his spot in the NASCAR Hall of Fame was unquestionably earned.

Michael Waltrip makes our list as an honorable mention with a net worth of around $40 million. Waltrip is a former NASCAR driver who currently works for Fox Sports as a NASCAR commentator. His most notable wins include victories at the Daytona 500 in 2001 and 2003, although he has 16 total victories to his name. Waltrip began his NASCAR career in 1986 and continued racing through 2017. While he may not boast as many victories as other competitors on this list, Waltrip has certainly had an effect on the sport and accumulated a hefty net worth to show for it.

What is the Daytona 500 purse size?

A NASCAR purse is the amount of money that is divided among drivers after the race is completed, depending on where they place. NASCAR is not a “winner-take-all” sport; drivers earn money even if they do not place first. It is private information regarding how the money is distributed to the players; however, the Daytona 500 purse is the largest sum in American motorsports history at over $23 million.

What is the most popular NASCAR race track?

Which NASCAR driver is the highest paid driver in 2022?