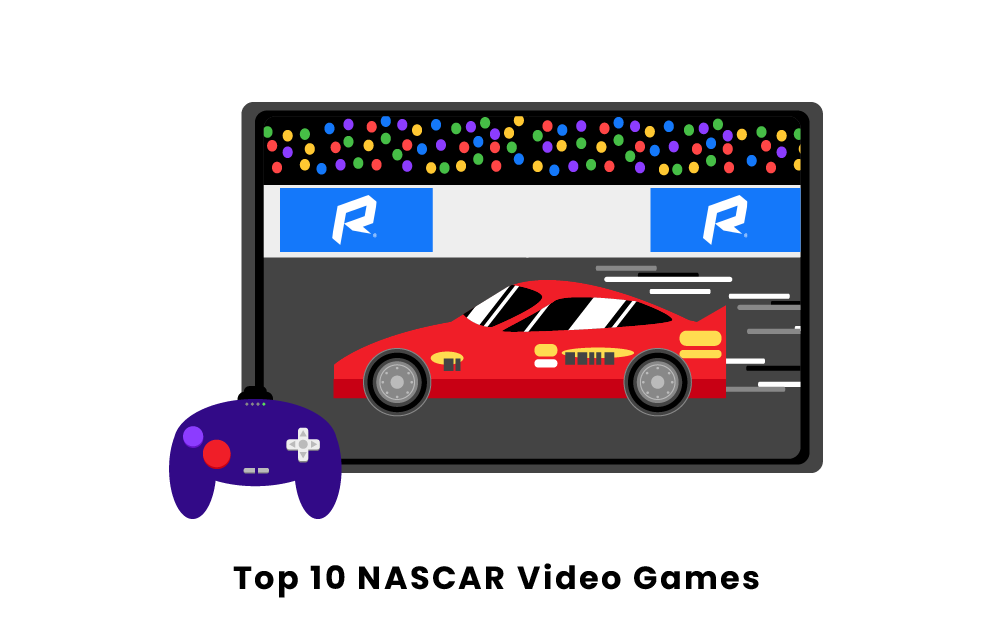 What are the most popular NASCAR video games?

NASCAR Heat was released in 2000 and the series is still incredibly popular after two decades, with NASCAR Heat 5 recently released in July 2020. NASCAR Heat was literally game-changing as it was available on many different platforms, including PlayStation and Microsoft Windows, for both regular racing fans and intense sim lovers. This game had a steering wheel support ability and a vibrations feature for the gamers to really feel they are driving. This game was developed by Monster Games, before Electronic Arts (EA) acquired the sole license for a decade soon after its release.

NASCAR Heat 4 is not the most recent NASCAR video game to be released, but it is the most recent video game that has been in a wide circulation among the stock car racing game community. NASCAR Heat 4 has been praised for its significant improvement in graphics and for many options for the gamers to choose from, with 38 different race tracks and over 150 different NASCAR teams and drivers. This game also includes the feature to race in the dirt and not on an asphalt track. NASCAR Heat 4 was developed by Monster Games and published by 708 Games.

NASCAR: Dirt to Daytona has been a cult-favorite for many ever since its release in late 2002. This stock car racing game was the premier game at the time, incorporating all of the bells and whistles having incredible graphics at the turn of the millennium, a wide selection of stock cars to choose from, and a thorough career mode. This simulation was created by Monster Games and published by Infogrames. Despite almost two decades passing and many more games released, NASCAR: Dirt to Daytona is still widely played today on older platforms such as the PlayStation and the GameCube.

NASCAR Thunder 2004 is one of the NASCAR video games developed by Electronic Arts Sports (EA Sports) when they owned the sole licenseship back in the early 2000's. This racing simulator was actually released in 2003, not to be deceived with the title of the game. NASCAR Thunder 2004 is a highly loved game as it permits gamers to adjust so many aspects of the game, allowing for a complete unique experience for every single gamer. This game also included actual events that occurred in the 2002 season into this 2003 game for the gamers to relive. This game was top notch back in 2002.

NASCAR Heat Evolution ranks right in the middle as it offers incredible races and sounds that make the gamers believe that they are a part of the real race. This game is one of the newer video games released under the NASCAR title, with a release date in 2016. NASCAR Heat Evolution features a variety of top drivers and an incredibly clear graphic experience. Monster Games developed this game with Dusenberry Martin Racing publishing the game, with gaming abilities on the PlayStation, Xbox One, and Microsoft Windows.

A completely different racing experience than ever before, NASCAR Kart Racing was developed specifically for the Nintendo Wii console. NASCAR Kart Racing is developed in the same manner as the iconic Mario Kart racing, with similar capabilities and the same graphic design. Many expected to be disappointed with this game as most enjoy the realistic NASCAR video games, however, NASCAR Kart Racing won gamers over with their charming animations and genuinely fun game. This game features a unique ability wear racers have teammates, and just like the Mario Kart, racers can have a turbo boost if they are bumper-to-bumper with their teammates on the racetrack. EA Sports developed this game in 2009.

NASCAR Rumble is one of the oldest games on this list, but is still loved today. For its release in 2000, the graphics and audio were incredible. The audio used was not shy on the volume of the engines; it was realistic to actual racetracks. Some features that were new for its time included having a multiplayer option, vibrations, and a power-ups ability similar to a turbo boost in NASCAR Kart Racing. NASAR Rumble was developed and published by EA Sports. Gamers who either played two decades ago or two weeks ago will have remembered the comedic announcer whose jokes were always spot on.

NASCAR Racing 1999 Edition brings great nostalgia for stock car racing gamers, and the design was impeccable at its time. The game consisted of three different series: the NASCAR Cup Series, NASCAR Grand National Series, and NASCAR Craftsman Truck Series. This game had an option of 115 drivers and 35 tracks, with features including a multiplayer option. NASCAR Racing 1999 Edition was developed by Papyrus Design Group and published by Sierra On-Line. This game was only available on Microsoft Windows.

NASCAR The Game: 2011 is another popular NASCAR video game adored by many gamers. This game was released in 2011 with many updates from older NASCAR games. This game significantly improved their graphics, focusing on many details to make the gamers feel immersed in the game. Each player is assigned a rival to increase gamer incentives to play to the best of their abilities. NASCAR The Game: 2011 also allows the gamer to customize different aspects to create a specialized experience. This racing simulation was developed by Eutechnyx.

NASCAR Heat 5 has gained an immense amount of popularity since it was released in the summer of 2020. NASCAR Heat 5 is the total package, with 34 total circuits, with the graphics capturing the environment and visuals of real world locations perfectly. This game also has five dirt tracks for those interested. NASCAR Heat 5 was developed by 708 Games, just like NASCAR Heat 4. This game is hot off the press and already garnering positive feedback.