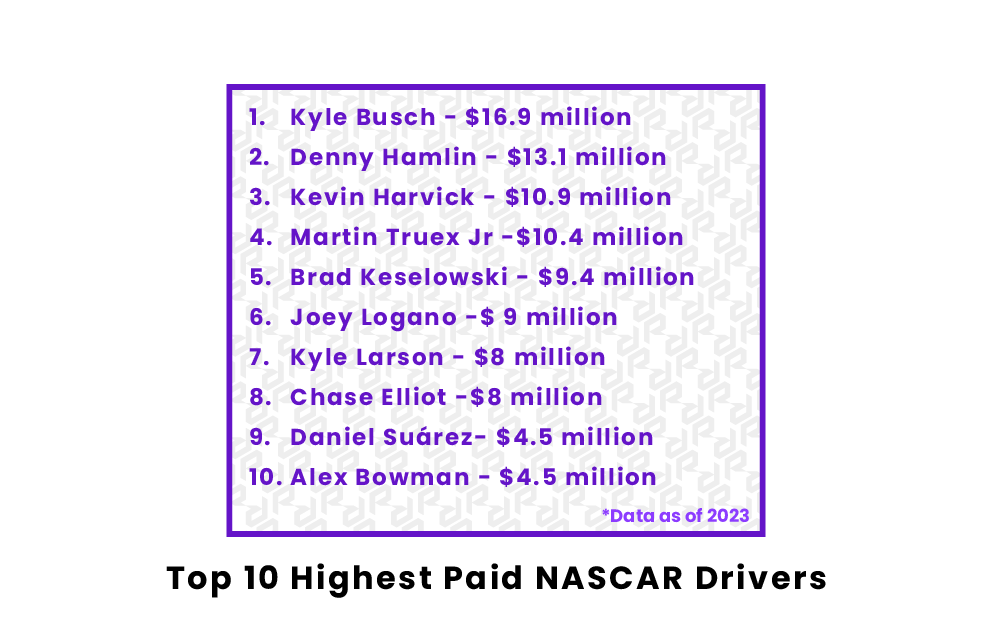 The world of motorsports offers an incredibly lucrative opportunity for those who reach its top levels. One of the most popular forms of motorsport watched in the world is the American classic of NASCAR. Just how much do the top NASCAR drivers make in salary? Which drivers are the highest paid? Keep reading to find out!

Who are the highest paid NASCAR Drivers in the world?

Kyle Busch is the highest paid NASCAR driver with a salary of $16.9 million annually. Busch races for the Richard Childress Racing team, driving the No. 18 Chevrolet Camaro ZL1. Busch currently has 60 NASCAR victories under his belt and is one of the most successful drivers in NASCAR history, statistically rising to the rank of ninth-most-winning of all time in his 17-year career.

Denny Hamlin is a seasoned NASCAR veteran who started his career in 2005. Hamlin drives  for the Joe Gibbs racing team. An incredibly proficient driver, Hamlin has amassed an outstanding 48 wins in his 17-year career. Starting off with no podium finishes in his 2005 debut season, Hamlin has climbed the ranks and become one of the sport's top competitors. Hamlin recorded a salary of $13.1 million for the 2022 season, making him NASCAR’s second-highest earner.

Kevin Harvick is the driver of the Tony Stewart Ford no.4. Harvick has been a major competitor in NASCAR since 2001, and in his 21 years competing in the sport, he has found his way to 60 wins at NASCAR'S top level. In the 2022 racing season, Harvick recorded an annual payout of $10.9 million.  These victories include some of NASCAR'S most famous tracks, such as the Daytona 500 and the Southern 500.

Martin Truex, another racer of the Joe Gibbs team, is the 4th highest paid NASCAR driver in the world. In the 2022 season, Truex Jr. was being paid $10.4 million by the Joe Gibbs team. Martin’s career stretches back to a humble beginning in 2004, followed by two winless seasons. Since that time, Truex has recorded 31 career wins in various divisions within NASCAR. Truex Jr. races the number 19 Toyota Camry in the NASCAR cup series.

Brad Keselowski has been racing in the NASCAR cup series since 2008. As he enters his 14th season,  Keselowski currently races under Jack Rouch, for the RFK race team. Keselowski received a salary of 9.4 million in the 2022 season, during which Keselowski secured six top-10 finishes. Keselowski races with a Ford sponsorship and drives the number 6 car.

Joey Logano, the sixth-highest-paid driver in NASCAR, is a 14-year veteran of the sport. In 2022 he was listed as receiving a salary of $9 million. Logano has recorded 31 Cup Series victories and currently races for the illustrious  Penske racing team. Under sponsorship from Ford, Logano was the 2018 and 2022 Cup Series champion. In addition to the 2022 championship title, Logano placed in the top 10 positions 17 times during the season.

Despite having only just completed his eighth NASCAR season, Kyle Larson is valued at $8 million by Hendrick Motorsports. When reviewing his stats, it's easy to see why. Already stacking up 19 wins in just eight years, Larson is on pace to go down as one of NASCAR’s finest. Kyle Larson drives the Hendricks Motorsport No.5 Chevy.

Another racer for the Hendrick Motorsports racing team, Chase Elliot is actually tied with Kyle Larson for salary, with both making 8 million per year. Elliot is just one cup win shy of Kyle Larson's record, boasting a still impressive 18 cup victories.  Elliot also drives under the Chevy banner, racing the No.9 Chevy in the Cup Series.

Daniel Suarez is a relative newcomer to the world of NASCAR. Entering into his fifth season in 2022, the young star is already making massive moves in terms of salary. He is currently being paid $4.5 million annually by the TrackHouse racing team despite only having one win under his belt. If the young driver can keep climbing the ranks in the Xfinity Series, his salary only shows room for growth.

The final member of the top 10 highest paid NASCAR drivers is Alex Bowman. He races for Hendrick Motorsports, which is partly owned by Jeff Gordon. In the 2022 season, Bowman was valued at $4.5 million annually by Hendrick. Unsurprisingly Bowman races using a Chevy model and flashes the No.48 in the Cup and Xfinity series.

Who is the highest paid NASCAR Driver in the world?

The highest paid NASCAR driver in the World is Kyle Busch. Busch races for the Richard Childress Racing team and has a salary of $16.9 million annually as of 2023. He drives a Chevrolet Camaro ZL1, and his car number is 8. Kyle Busch is one of the most highly regarded drivers in the world of NASCAR, with 17 years of competitive performance under his belt and 60 recorded victories.