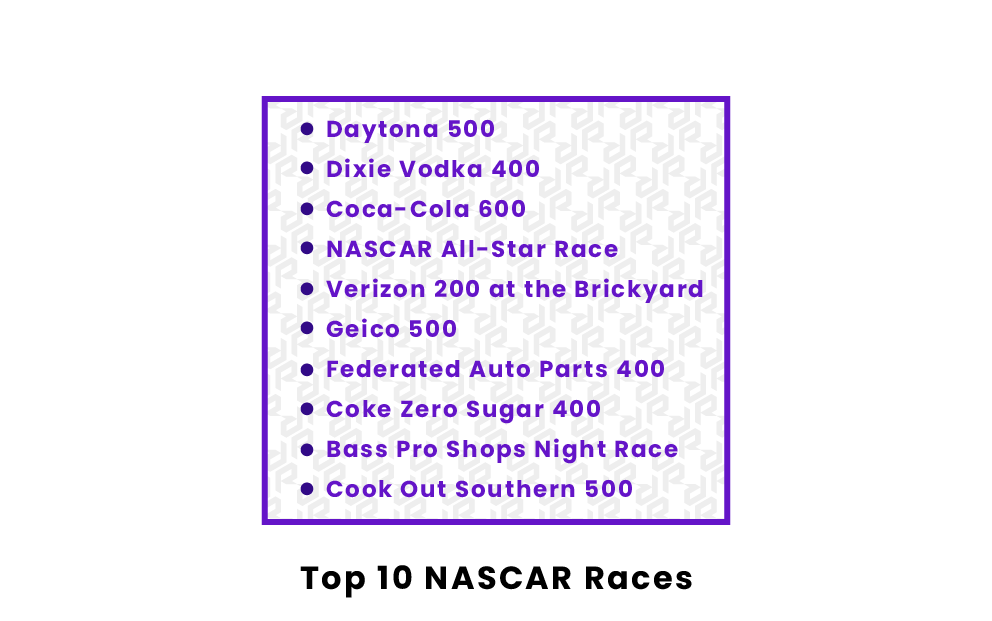 What are the Most Popular NASCAR Races?

The Daytona 500 is held each year in Daytona Beach, Florida, and is considered “The Great American Race.” It is a race with a distinguished history, and it was only the second stock car race in history to last 500 miles. It is arguably the most popular race in all of stock car racing, and it is considered to be NASCAR’s version of the Super Bowl, as it will often have the largest cash prize and audience. The Daytona International Speedway is also thought to be one of the most difficult tracks in the sport, making a victory there all the more impressive. The Daytona 500 takes place in late February, kicking off the NASCAR Cup Series regular season.

Taking place at the Homestead-Miami Speedway, the Dixie Vodka 400 is one of the final races of the NASCAR Sprint Cup season. Right in the middle of the Round of 8 of the NASCAR Playoffs, the Dixie Vodka 400 will always be a race with a lot at stake, making it extremely exciting for fans everywhere. This is a critical race for all remaining playoff drivers as it may make or break their championship hopes.

The Coca-Cola 600 is the longest race on the Cup Series schedule. It is also one of the most important. The race is held at Charlotte Motor Speedway, just outside of Charlotte, North Carolina, and in the heart of NASCAR country, meaning attendance is always high. This race is also during the Memorial Day Holiday, and it immediately follows the NASCAR All-Star Race, making it a great day for auto racing fans all over the country.

The NASCAR All-Star Race attracts the best of the best, as it is a fun exhibition race that invites all of the winning racers from the previous season. For years, this race took place at the Charlotte Motor Speedway but will now be taking place at the Texas Motor Speedway in 2021. While there is a cash prize for the winner of this race, there are no points awarded for the Cup Series standings. This creates a very fun atmosphere for the fans and puts less pressure on the drivers.

Located at Talladega Superspeedway in Alabama, the Geico 500 is commonly the fastest race of the year. The 1997 race still stands as the fastest NASCAR race ever run, with an average speed of 188 miles per hour. Talladega Speedway is a 2.66-mile oval-shaped track, which is the largest of all the NASCAR ovals on the schedule. The long track is what allows cars to go so much faster than they may at other locations on the tour, making for an exciting race in a historic venue.

Held at the Richmond Raceway in Virginia, The Federated Auto Parts 400 is a 400-lap race over 300 miles. Richmond Raceway track is only .75 miles in length, making for an exciting short track that fans love to see. This race attracts a lot of fans, and a great experience for all who attend is guaranteed. One of the biggest attractions is the FanGrounds campground located in the track’s infield. The interactive experience allows fans direct viewing of the NASCAR garages.

The Coke Zero Sugar 400 is the last chance to qualify for the Round of 16, the first of three elimination rounds that make up the NASCAR Playoffs. The final race of the “regular season” is held at Richmond every year. For obvious reasons, this is a very important race for many drivers because it may be their last chance to race for a championship in that year. It is the final race of 26 regular season races and will often come with a lot of storylines for drivers trying to become one of the 16 Chase contestants.

The Bass Pro Shops Night Race, formerly known as the Sharpie 500, is a night race that takes place at Bristol Motor Speedway in Tennessee. It is one of the hardest races for a driver to qualify for. The Bristol Motor Speedway is only a half mile in length, making it optimized for a traditional high-contact style of short-track racing. There are 40 cars in a small space, meaning that drivers spend the night crammed up while driving at lightning speeds.

Darlington Raceway in South Carolina is an egg-shaped 1.3-mile track located in the heart of NASCAR country. The track is full of rich history and is a great venue for fans and racers. One of the oldest races on the Cup Series schedule, consisting of 367 laps, the Cook Out Southern 500 has been held every year since 1950. Darlington Raceway also hosts the Goodyear 400. The track has unique characteristics that puts the surface on an angle, forcing the drivers to race against the wall. This exciting race on a funky track is a fan favorite for a good reason.

The Food City Dirt Race is held at the Bristol Motor Speedway dirt track, which is specially constructed and demolished each year for the race. The race consists of 250 laps and covers a distance of 133.25 miles. It is the only dirt race on the Cup Series schedule where drivers can earn points towards the standings. The Food City Dirt Race has undergone some serious changes throughout the years, including multiple renamings, changing the surface from asphalt to dirt, and in 2022, becoming a night race. The event is typically held in March or April of each year to avoid weather concerns in the early months of the year.

The Bank of America ROVAL 400 is held at Charlotte Motor Speedway in Concord, North Carolina. It is the final race of the Round of 12 in the NASCAR Cup Series Playoffs. The ROVAL at Charlotte Motor Speedway is extremely unique, as it combines aspects of both a road course and regular oval, hence the name “ROVAL.” Despite the name, the Bank of America ROVAL 400 is only 248 miles long but is equivalent to 400 kilometers.

What are the biggest NASCAR races?

The races on the NASCAR Cup Series schedule with the most prestige are the Daytona 500, Dixie Vodka 400, and Coca-Cola 600. The Daytona 500 has long been the most prestigious race on the schedule due to the storied history of Daytona International Speedway and the cash prize associated with the race. While NASCAR does not disclose driver earnings, it is estimated that the winner of the Daytona 500 receives a prize of around $2 million.

How many dirt races are in the NASCAR Cup Series?

There are two dirt races on the NASCAR Cup Series schedule, the Busch Light Clash at the Coliseum and the Food City Dirt Race. However, the Clash at the Coliseum, held at the Los Angeles Memorial Coliseum, is an exhibition race and doesn’t count towards Cup Series playoff points. The Food City Dirt Race, held at the Bristol Motor Speedway, is the only dirt track in the Cup Series schedule that earns drivers points toward qualifying for the playoffs.

What races are in the NASCAR Cup Series Playoffs?