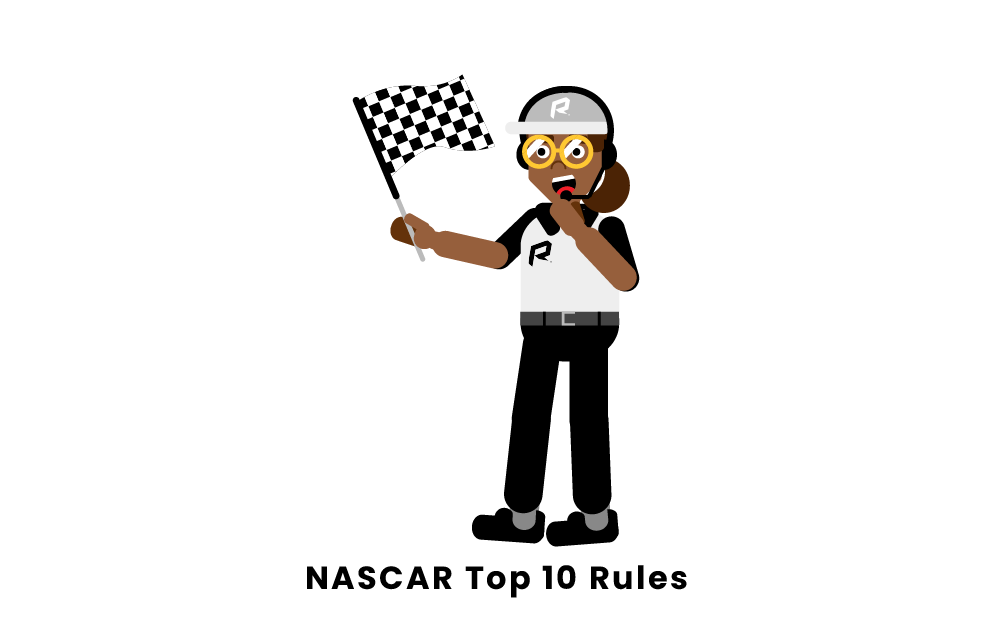 What are the Top 10 Rules of NASCAR?

1. Talk to the Media

NASCAR forces their drivers to talk to the media members no matter if they like it or not. Any driver who qualifies or finished top three in an event is forced to the media center in order to talk to members of the media. Even if a driver lost a close race or a late crash costs them a win, they must still get interviewed. If a driver were to decline or refuse post race or qualifying interviews may receive a hefty fine from NASCAR themself. Even though this rule seems unfair for some drivers, it seems as if it is just worth it to stick out the media interviews in order to save your money.

This rule has been brought to light recently when popular driver Kyle Busch refused some post race interviews after suffering tough defeats. The media is important for some sports leagues since media members have a lot of control over what people think of the sport, and could help the image by saying good things. If drivers make a bad impression with the media, they may start to see a lot of fans turn against them.

Before every race, it is mandatory for all drivers to attend something called driver briefings. These briefings occur before every NASCAR race, no matter what series you are participating in. At these driver briefings officials go over key points about the upcoming race as well as any changes to the racetrack that the drivers may not know about or may need to know. These topics could range from safety issues that could affect the driver and his crew, all the way to speed limits that the drivers need to follow. Rarely do drivers skip the briefings but if it were to happen they would most likely receive a penalty along the lines of being barred from the race, fined, or a combination of both.

This is a very important rule because it does not only apply to the drivers, but also includes the pit and racing crew. If you are a person that is at the front lines of the race you must wear some sort of safety equipment in order to protect yourselves from the danger of the position that you are in. This safety equipment usually includes helmets, gloves, a jumpsuit, and boots.

This equipment is not any normal equipment and can withstand temperatures upwards of hundreds of degrees fahrenheit. The helmets are made of some of the strongest material as they must protect the crew members from any sort of flying debris that may come crashing off of the cars.

Along with the crew members, of course the drivers must also wear safety equipment to protect them while in the car. Their equipment can also withstand very high temperatures and are also made to allow drivers to use the bathroom if they really need to. The drivers outfit also includes helmets, gloves, jumpsuits, and boots.

The pace car, or safety car, is what is used in NASCAR to keep the drivers at a constant pace during the pre race lap or during crashes and car stoppages. The pace car ensures that everyone stays in the same positions they were in at the time of the stoppage and makes sure that the cars are a slower pace than usual for safety reasons. While drivers are following the pace car, they must maintain the pace that is being set and maintained by the other drivers and are prohibited from passing cars in front of them.

Sometimes at big and famous races, there will be a celebrity driving the pace car as a publicity stunt. This celebrity is usually a fan of the sport and will enjoy the role that they are given. Some pace car drivers at the Daytona 500 include Dan Marino, Brett Favre, and John Cena.

Scrutineering can be seen as the laws that govern NASCAR races that all drivers must follow in order to participate in every race. Cars must go through scrutineering before every race to ensure that they follow the correct dimensions and restrictions that all the cars must have. After scrutineering takes place, some teams may try to push the law a little bit and add little improvements to their cars that other people may not know about.

Any vehicle that does not pass scrutineering may be disqualified from the race and the driver may not be able to participate. Each season, NASCAR creates new scrutineering rules that the cars must follow and be checked for before each race. These rules are taken very seriously as they level the playing field for each race and ensure that no driver will have an advantage over others with car attachments.

Restarts are a crucial part of the racing game and can result in drivers overtaking other people or even being the cause for another accident and the pace car being brought back out. The packed positioning of a restart gives drivers a better chance to take better positioning and move past other drivers on the course. Even though it is a good time to pass other drivers, restarts can also be a cause for more accidents and further restarts.

As drivers are driving to pass each other during restarts as well as the close packing of the cars, it is a breeding ground for accidents. A late cut off by a driver or a failed pass could cause multiple car pile ups that would lead to a longer delay in the race. Restarts could really flip the race as it could lead to many outcomes that could benefit some drivers while ending the race for others.

Each racing series uses their own form up to start the race and try to level the playing field for the racers. In NASCAR and IndyCar, they use the same form up as Formula 1 racing where they use a two by two rolling start. This means that the cars are already moving in the pre lap before the race actually starts. The only exception in NASCAR to starting the race in a two by two format is during the Indy 500 when instead, the drivers line up in a three wide format to spread out the cars on the larger track. The way the cars are set up leads to many accidents as the cars are very bunched up and one slight mistake could start a dangerous pile up.

There is only one place on the NASCAR track that drivers are limited in the speed that they can go. In the pit area of every race, there is a speed limit that the drivers must follow in order to remain safe and make sure that they are not driving wildly. The speed limit coming in and out of pit stops may vary from race to race but drivers that do not follow the speed limit can be penalized in the race if they are caught. In most of the cars the speed in the pit is controlled by a button in the car that keeps the driver at a constant slower speed in the pit.

The speed limit is usually kept between 40 and 60 miles per hour opposed to the 180 miles per hour that the racers are usually driving at. Some drivers may not like that they cannot come out of the pit at top speeds and continue the race as if they never left, but this rule is important to keep all the drivers and crew members safe during pit stops.

When it comes to blocking, it is a little of an ambiguous area in the rulebook. Blocking is when drivers deliberately cut in front of other drivers so that they cannot pass. Drivers need to have the chance to pass others if they can, so if they are being blocked, they are at a large disadvantage in the race. Not only is it unsportsmanlike but it is extremely dangerous as a block could lead to a large crash on the track. Think of blocking as constantly cutting off another driver while going 180 miles per hour on a highway; this will lead to many accidents, even with professional drivers.

Blocking is technically not allowed as noted in the rulebook but it is rarely ruled on and blocking is sometimes supported by drivers and analysts. Drivers understand that at times in a race, blocking is part of the strategy to win. However, drivers will obviously get angry if they are part of a wreck that was caused because a driver was blocking. The only part of the blocking rule that is actually enforced is when one driver forces another driver below the yellow line.

10. No Passing the Double Yellow Line