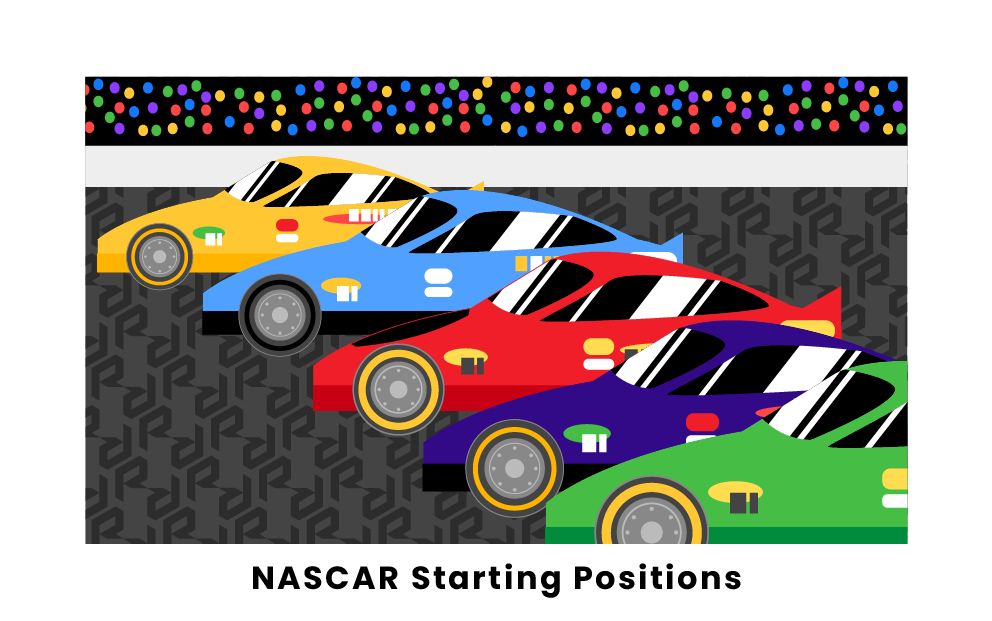 At the beginning of every NASCAR race, the cars assume their starting positions on the grid and prepare for the starting signal. Have you ever wondered how the order of the race cars gets chosen? Is there a benefit to starting in a certain position? There is a lot that goes into the NASCAR starting positions, so let’s get started.

What are Starting Positions in NASCAR?

The cars are parked in this pattern on the grid in pit lane before the race. Before the race starts, the cars will perform a pace lap behind the pace car and then make a rolling start as they cross the start/finish line, all while in this same starting formation. The starting order is determined by a qualifying session, which takes place the day before the race.

Before the race, each driver participates in qualifying. The driver with the quickest time wins the pole position. They are referred to as the pole-sitter.

Qualifying is made up of three sessions. In the first two sessions, the field is split in half, with each car taking two solo laps around the track. The fastest five cars from each of the first two sessions advance to the final one, in which those ten cars again compete to set the fastest lap time. The times from the final qualifying session determine the pole sitter and the top 10 starting positions. The remaining 30 members of the field are put into position based on their initial qualifying time.

There are typically 40 cars in a NASCAR race, so landing a good starting position could be the key to a win. The order of the positions is sequential, so anyone watching the race can determine the best qualifiers if they can identify the pole position car.

There’s a clear advantage to having a good starting position: being able to start before the other drivers. After the race begins, the driver in the pole position has a better chance of staying in the first place spot throughout the race.

Although a first-place win is not guaranteed, there is a strong correlation between the pole position and ranking within the top five. There are some advantages to being in the middle or back of the pack, too. Drivers in these scenarios are able to pace themselves accordingly and don’t have to maintain a lead throughout the race.

Another advantage of being in pole position is being the first to choose their pit stall. In addition to getting the optimal position on the track, the pole-sitter gets the best spot in the pits.

While it may seem counterintuitive, there are disadvantages to being in the pole position. One such disadvantage is that the driver must then maintain a lead throughout the entire race. If a driver would rather pace himself and then close in on the competition towards the end of the race, that is hard to do from this position.

Another possible disadvantage is an increased chance of accident and injury. Since many cars gain traction and may pass the pole position car, this can increase the likelihood of a crash or collision with the walls of the track.

Some disadvantages of being in the middle or back of the pack are also related to danger. If a driver is surrounded by several cars, there is a higher chance of crashing. Also, it may be harder for a car toward the back of the lineup to gain leadership and maneuver their way up to a leading position.

The 36 charters owned by various race teams guarantee their cars a starting position, regardless of how they perform in qualifying. In the case that a driver of a chartered car cannot complete qualifying or does not set a competitive qualifying time, they will be assigned starting positions behind the cars that completed qualifying successfully.

What is the pole position in NASCAR?

How do you qualify for the pole position in NASCAR?

You qualify for the pole position in NASCAR by setting the fastest lap time during the qualifying session. Qualifying is held the day before the race during which drivers take solo laps around the track, attempting to make the best time. Most drivers are pre-qualified for the race itself because their team owns a charter. However, they must compete in qualifying to earn the right to start on the pole.

What is the best starting position in NASCAR?

While intuition may suggest that the pole position is the best starting position, many NASCAR analysts don’t think that it is the best position to start in. Starting in pole position may get you off to an early lead, but you have to maintain that for the whole race, pushing your car to the limit to stay ahead. Statistics, meanwhile, generally indicate that it is best to start a NASCAR race somewhere in the top 15 drivers. These drivers tend to come out on top more often than others due to starting ahead of the pack but also not having the pressure to maintain the lead throughout the race.