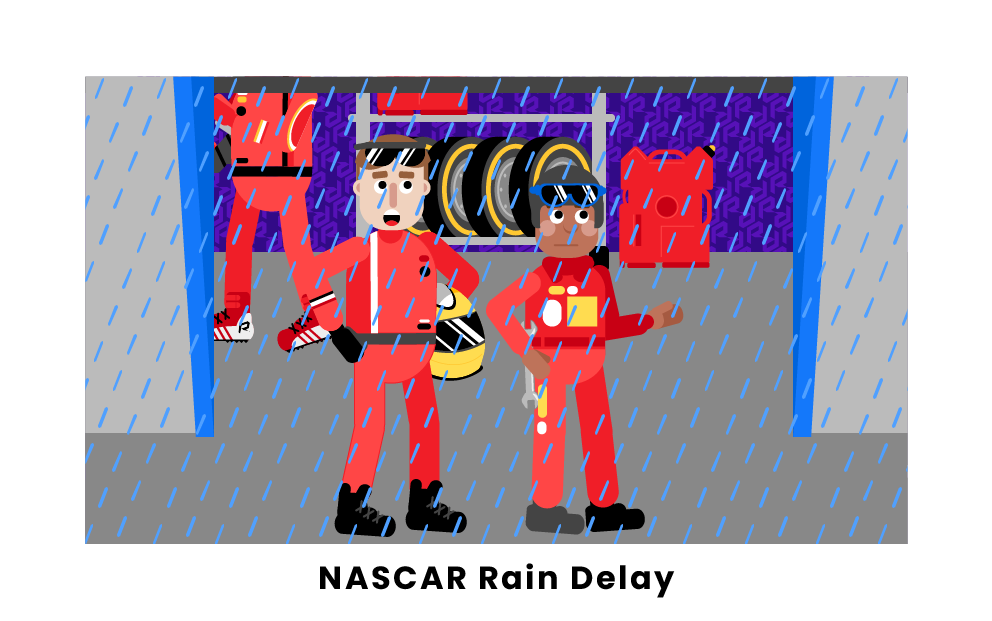 Below are the rules for rain delays in NASCAR:

Does NASCAR Race in the Rain?

Under most circumstances, NASCAR does not race in the rain. At road courses, NASCAR may choose to use rain tires and race under slightly rainy conditions. However, most NASCAR races will be delayed or postponed if there is rain or water on any part of the track.

Why Doesn’t NASCAR Race in the Rain?

NASCAR doesn’t race in the rain because of tire limitations and out of concern for driver and fan safety. NASCAR races are outdoor events, so only holding them during nice weather keeps fans happy, too. Keep reading for more information on all of these reasons, along with a list of NASCAR rain delay rules.

Tires on normal commuting cars have tread, which is a set of grooves in the tires that move water away from the tire as the car or vehicle is in motion. When these tires are worn down, the tread on the tires also gets worn down, which can result in what is known as hydroplaning. Hydroplaning is very dangerous as the driver loses control of the car on the road.

NASCAR tires, on the other hand, are completely smooth, with no tread. This is because NASCAR drivers want the most traction and contact with the race track at all times. Good traction is needed because NASCAR cars race at speeds of up to 200 mph. While NASCAR does have rain tires, they are only used at road courses.

If NASCAR races happened regularly in the rain, there would be many risks involved. In addition to drivers losing control of their race cars, the visibility for the drivers is greatly reduced in bad weather. With limited visibility comes an increased risk crashing. As a result, NASCAR does not often race during rainy weather, especially when it limits visibility, because it is extremely dangerous.

Oher racing sports have raced in the rain, and the results have often been dangerous. For example, Formula 1 has had many races in the rain. While Formula 1 does not race in lots of rain, a little rain does not stop them from racing. In past races, these races have become dangerous with increased crashes.

NASCAR is a sport that depends on its fans and respects traditions. If NASCAR were to race in the rain, it would discourage fans from showing up to races and buying tickets in advance. This is because all NASCAR race tracks are open-air and afford little protection from rain, which would lead to fans getting wet during a rainy race. NASCAR wants people to buy tickets, attend races, and buy merchandise, and it is impossible to do so in inclement weather.

NASCAR race tracks and grandstands are outdoors. As a result, there is little cover for fans to shelter under in bad weather. NASCAR cares about its fans’ safety just as much as that of its drivers, so it makes sure to cancel races during the rain. Fans are urged to find shelter until the weather improves.

What is the best weather for a NASCAR race?

Weather plays a big factor in NASCAR, and clear skies are a big part of the sport. The season takes place from spring through fall, so nice weather is usually the norm. While races can be run in chilly weather, the ideal weather is sunny, clear skies, as it makes for the optimal race environment. Not only are racers able to drive best in this weather, but more fans are able to come out and support their favorite racers.

How often do rain delays happen in NASCAR?

Rain delays are common in NASCAR. This is because NASCAR does not host races in the rain, so often, bad weather delays the start of the race. If the rain continues throughout the entire day, a race can be delayed by many hours and potentially suspended until the following day.