Do NASCAR Cars Have Airbags? 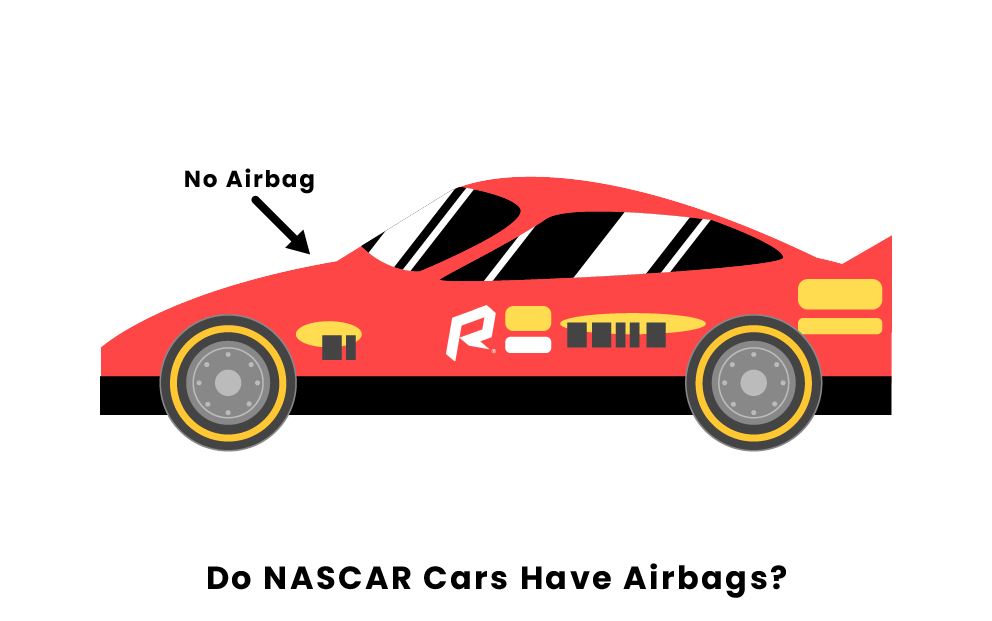 Despite traveling at extremely fast speeds, NASCAR cars don’t have airbags as a form of protection for drivers. This article will explore the reasoning behind not having airbags and alternative safety measures in NASCAR.

Why Do Race Cars Not Have Airbags?

There are so many safety measures incorporated into NASCAR cars that it is not necessary to have airbags, as the effectiveness of safety measures in race cars outweighs the need to have them. Safety precautions such as the roll cage, seven-point seat harness, window net, roof flap, and HANS device help keep race participants safe. Race cars are built in a way to minimize the force loads that drivers experience.

Besides their being unnecessary, airbags would hinder the performance of NASCAR drivers. During a race, a driver may hit a serious bump, which could deploy an airbag.

There is a huge amount of risk when participating in NASCAR events. There has been a long list of fatal and non-fatal injuries since the creation of NASCAR. Since the beginning of NASCAR in the 1940s, there have been 29 fatal crashes in races. Most recently, Dale Earnhardt Sr. died from a crash during a race in 2001. Fortunately, there have been zero deaths at NASCAR events since then. This is due to the implementation of safety devices and regulations by NASCAR officials.

Despite having airbags and driving at slower speeds, deadly crashes in normal cars occur quite often. This common safety device isn’t completely effective in preventing serious injury in car crashes. NASCAR regulations require several other methods to protect drivers, including harnesses and HANS devices. Therefore, there is no serious risk in not including airbags in NASCAR cars.

Rather than having airbags, NASCAR cars are built with other safety features to keep drivers safe. First off, the frame of the car itself is built out of rigid parts that are meant to absorb the shock of crashing into objects at high speeds. The strong middle section is called a roll cage and is used to protect the drivers. The driver’s seat is attached to the roll cage to ensure complete attachment to the foundation of the car. The seat belt is a five-point harness system that keeps drivers in place. Window nets allow easy egress from the car while protecting the drivers from debris.

Roof flaps are used to help cars stay on the ground when traveling at extremely fast speeds. Without a set of roof flaps, race cars could easily become airborne if they hit another race car at the right angle. All drivers are required to wear fire-retardant suits that protect them from heat and flying objects. An obvious safety precaution is the helmet that all drivers must wear. Without this device, concussions would become a lot more prevalent.

Perhaps one of the most important safety precautions is a harness collar made of carbon fiber called a HANS device. This harness is worn around drivers’ helmets and helps minimize the amount of force that is put on a driver’s neck during a crash. All of these devices exist to help protect participants in a very dangerous sport. Airbags no longer serve a purpose when drivers are being protected in many other ways.

Why aren’t airbags used in NASCAR?

Airbags aren’t used in NASCAR because all of the other required safety equipment makes them unnecessary. NASCAR race cars are engineered to help drivers survive intense crashes, so the harnesses, helmets, and protective devices provide much more protection than the seatbelts and airbags found in a road car. Additionally, airbags could be dangerous in a race if they are deployed inadvertently.

What safety devices are used instead of airbags in NASCAR?

Pages Related to Do NASCAR Cars Have Airbags?