SportsGamesActivitiesNASCARHow Does NASCAR Betting Work?Top 10 NASCAR Video GamesTop 5 NASCAR BooksTop 5 NASCAR BrandsTop 5 NASCAR MoviesWhat is NASCAR?Learn NASCAR5 Most Common Nascar InjuriesHow Long Does It Take To Do One Lap Around A Track In NASCAR?How Long Is The NASCAR Season?How Much Does It Cost To Field A One-Car NASCAR Team?How Much Does It Cost To Own A NASCAR Team?Is NASCAR Better Than Formula 1?Is NASCAR Considered A Sport?List of NASCAR StatisticsNASCAR Lingo And TerminologyTop 10 Things Every NASCAR Fan KnowsWhat Are Grid Girls In NASCAR?What Are Songs That Mention NASCAR In Them?What Are The Annual Ticket Sales For NASCAR?What Are The Kinds of Auto Racing?What Is The Current Font Used For The NASCAR Logo?NASCAR CarsNASCAR DriversNASCAR RacesNASCAR Rules
Home>Sports>NASCAR>Learn NASCAR
PreviousNext

Is NASCAR Better Than Formula 1? 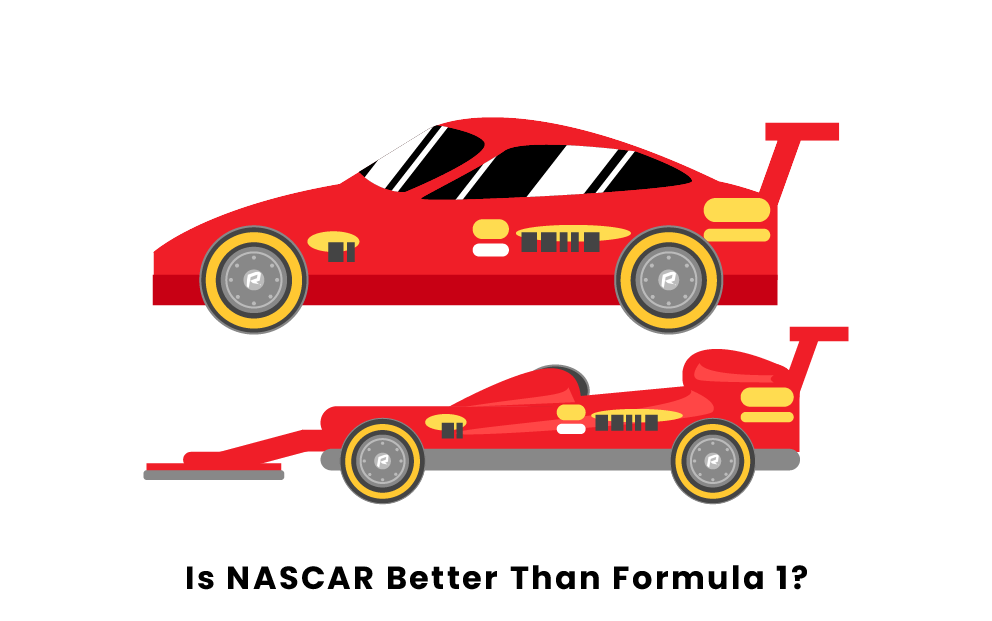 NASCAR and Formula 1 (F1) both have seasoned fanbases, and those fans have their preference for how motorsports should be. Ask any fan of either F1 or NASCAR which sport is better, and odds are they side with their sport. But, when critically determining which sport is better, certain objective criteria arise, as well as many questions. What makes a sport great? What draws fans towards a particular sport? What makes one sport to be better than another?

Most sports enthusiasts would agree, sports can facilitate a sense of community, and the advancement of team building and athletic skills. Whether you are rooting for Max Verstappen and the Red Bull team during a late season Grand Prix, or you are a seasoned Jimmie Johnson fan watching him dominate at Talladega, you probably find similar amounts of excitement watching whoever your favorites are flying around the track. This concept, then, may be the first factor when determining whether one sport is better than another. Are fans engaged with the sport? Have they built an emotional connection to sports athletes? Does the sport fulfill a positive collective desire? In the case of both NASCAR and F1, the answers are undoubtedly yes, yes, and yes.

Motorsports have a rich history that dates all the way back to the late 1800s. Interestingly, history is where the two sports share the most in common, as Formula 1 was technically invented just one year prior to NASCAR, which formed in 1947. A notable difference between them is that NASCAR was born from American stock car racing, and has yet to expand too far globally, leaving the sport with a feeble global presence compared to F1. F1, on the other hand, hosts races all across the globe, with drivers that come from many different countries competing in F1 events.

NASCAR does, however, have a unique historical identity. Built upon the legacy of dirt racers, it could be said that the sport draws a particular amount of its fans due to its humble origins. F1 has always held a stigma of elitism, perhaps in part due to the large economic barrier someone needs to overcome in order to become an F1 driver. NASCAR drivers, historically, have found that success often comes by starting young and grinding through the ranks. This is not to discredit the effort and skill needed to become an F1 driver, though, as the process is surely as intensive if not more than NASCAR drivers.

However, history and identity alone do not make one sport greater, but rather they serve to illustrate how the differences between the sports arose. The purpose of F1 historically seems to have been for automakers to showcase the insane abilities of their vehicular components, as well as gain clout over other automakers, whereas NASCAR appeared to draw its attention towards the high octane energy of compact, bumper to bumper racing, at a cost of using considerably scrappier, man-made vehicles.

Thus, if you value vehicular craftsmanship of legacy companies like Ferrari, as well as a deep global presence, F1 may be your sport of choice. If you would prefer the constant, exciting chaos and thundering noise of an ovular racetrack, with stock cars built by scrappy teams of car enthusiasts, NASCAR is your wheelhouse.

While both motorsports were born in the same era, the two sports could not be more different when observing their respective racing and cultural styles. F1 races typically take place on long circuits, many of which are placed in the middle of cities and towns and stretch across vast, varying environments. In contrast, NASCAR races take place in a stadium packed tightly with fans, and the drivers race in an ovular patter for the entire duration of the race.

This is where NASCAR receives the most amount of backlash from F1 fans, and the position is difficult to refute. How can people enjoy watching drivers speed around in circles? Where is the excitement? While it is true that NASCAR lacks the gorgeous and varying settings of F1 races, many people prefer the chaos and close quarters racing that NASCAR provides. Additionally, fans of F1 are not always able to observe the entire race from the stands, and must resort to watching portions of the race on monitors or screens.

So, Which Is Better?

Ultimately, it is almost impossible to answer the question of which sport is better. F1 fans love their sport, for good reason. The cars are lightweight and agile. The courses are beautiful and varying. The history and prowess of the sport is rich, powerful and arguably elite. Similarly, NASCAR fans love the chaotic energy of their sport. The tracks are loud and imposing. The cars have character. The drivers are personalities, not simply extensions of a larger automaker.

Before answering for yourself, do take time to consider stereotypical depictions of each sport, in addition to the contexts and styles of each. Whatever your sport though, these two can agree that speed is king.

Pages Related to Is NASCAR Better Than Formula 1?