Is Every Car In NASCAR The Same? 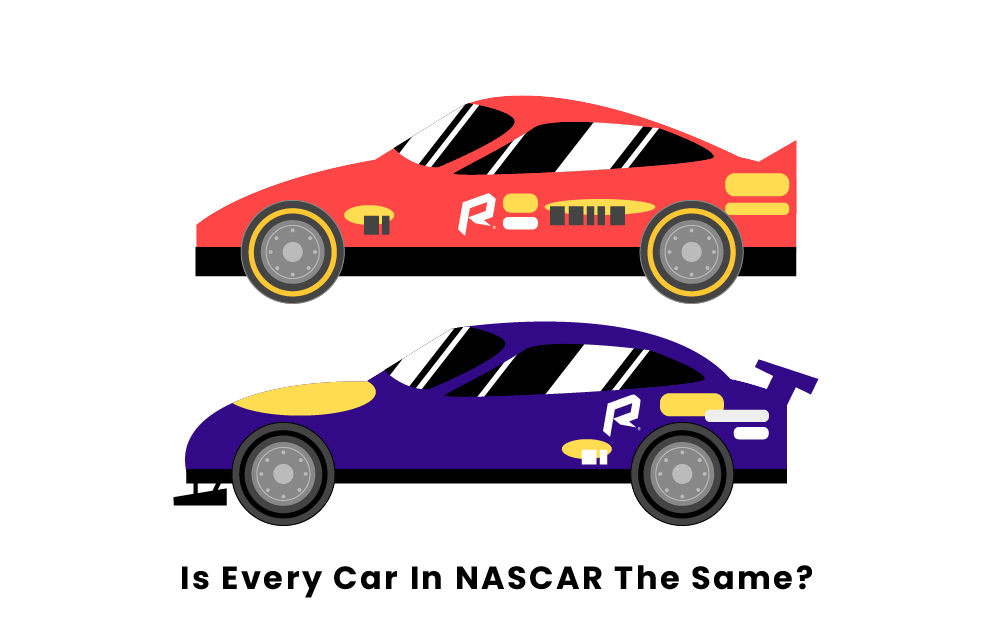 While every car racing in NASCAR must comply with strict regulations, there are slight differences in the cars that compete in NASCAR. When stock car racing began in the 1940s, drivers would purchase cars directly from dealerships with no modifications, using the same cars that people at home were driving. In 1948, NASCAR was formed. Since early racing tracks were primarily dirt, the organization allowed for vehicle modifications for durability.

Over the years, more and more modifications have been allowed, slowly increasing the performance of the cars over the years. The only real variation of NASCAR models today is in their engines and body shell. The overall shape of each car, the tires, suspensions, fueling systems, electronics, and transmission are all exactly the same.

What Cars Are Used In NASCAR?

There are currently three different manufacturers who produce NASCAR cars: Toyota, Ford, and Chevrolet. Each of these companies is required to submit its engine design to NASCAR for approval. Every NASCAR is a type of racecar known as the Next-Gen Car, or Gen-7, designed to make stock cars better resemble street-legal cars. This model was introduced as a template in 2022.

Every NASCAR vehicle must abide by strict standards and regulations or risk being disqualified, fined, or docked points. NASCAR regulates these parts for competition:

Racing teams are able to reuse these parts, and some elements are allowed for variation. For example, the block and cylinder heads of the engine can be re-machined within a range of certain tolerances. In terms of quantitative regulations for the engine, all engines have to feature a 358 cubic inch (5.86-liter) V8 that produces 750 horsepower. NASCAR’s current horsepower restrictions limit output to 670 horsepower at most tracks and 510 horsepower at superspeedways. Due to the strict regulations in place, all engines have nearly the same performance. NASCAR prohibits the use of turbocharged engines, and no car has ever used one in the history of the sport.

NASCAR uses a template, the Next-Gen race car, to establish a level playing field for all drivers and car models. The template is made up of the chassis (the underpinnings of the racecar) with steel tube welding to complete the skeleton of the car. Teams then attach their own body shell on the chassis, utilizing manufacturer-specific front splitters, side skirts, and rear fascias, giving their cars a distinctive appearance, but maintaining overall unity of appearance across the field. All cars racing in NASCAR must meet and be approved by the guidelines set by this template.

In the sport of NASCAR, there are many different tracks in several configurations at which races are held. Teams use different aerodynamic setups, or “packages,” based on which one optimizes their handling at particular tracks. Short tracks will favor setups where top speeds are lower and turning is tighter, while cars with higher speeds would be used for longer tracks. The short-track cars are designed with as much downforce as possible to increase friction and the ability of the car to stick through a tight or sharp turn. However, this higher downforce does increase air resistance, which is why these cars are only used on short tracks.

Superspeedway tracks such as Talladega and Daytona are examples of longer tracks where teams utilize higher-speed setups with less air resistance. In the early days of racing, teams had the ability to use three or four different cars, but as of 2020, NASCAR has limited that number to just two. Teams change aero packages by swapping out spoilers and front splitters, and making adjustments to the under-car aerodynamic panels.

How does the inspection process work?

Before any car can race in a NASCAR event, it must first be inspected and approved by a NASCAR official. These inspections take place on race days a few hours before the race starts. Inspectors carefully examine selected cars, making sure that every part and system conforms with NASCAR regulations. If a car fails its pre-race inspection, the team must make the required changes and pass a second inspection before the car will be allowed to race. The cars are also subject to a post-race inspection to ensure that no regulations or rules have been violated.

What happens if the car fails inspection?

If the car fails NASCAR’s inspection, it is subject to penalties or disqualification. An example of this was in 2007 when NASCAR found that the team for Jeff Gordon’s #24 car had modified the fenders in an area that was not permitted under NASCAR rules. As a punishment, the car was impounded until the fenders were fixed, the team was fined $100,000, and got a 100-point penalty, making for a costly mistake. More recently, Denny Hamlin was disqualified and stripped of his win after an unauthorized part was found on his car after the 2022 M&M's Fan Appreciation 400 at Pocono Raceway.

Do NASCARS have power steering?

All NASCAR race cars are built with power steering to help the drivers steer the vehicle when traveling over 200 mph. Cup Series cars are some of the heaviest used in motorsport, so power steering is necessary to safely control them at high speeds. Power steering systems help smooth out steering inputs, avoiding rapid adjustments that can lead to a loss of traction.

Can all NASCARs go in reverse?

All NASCAR race cars are designed and built to be able to go in reverse in case the driver ever needs to change directions in an emergency, such as when they overshoot their pit box. NASCAR cars currently use a five-speed manual sequential transaxle, so sometimes it is mistakenly believed that they cannot go in reverse. The reverse gear is also used when unloading and loading the vehicle.

Pages Related to Is Every Car In NASCAR The Same?