How Much Skill Does It Take To Drive NASCAR? 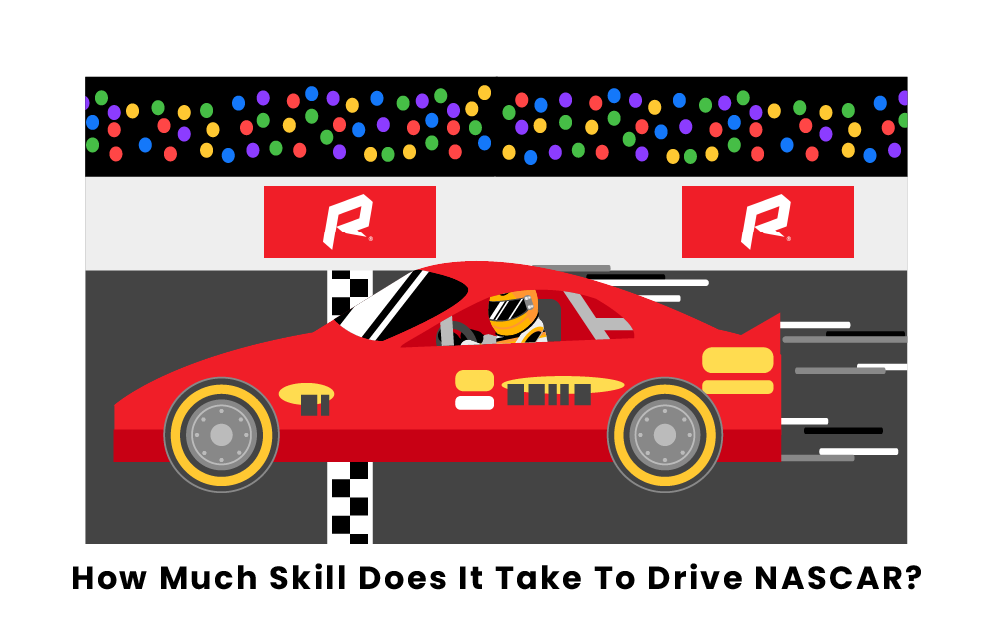 NASCAR is a popular sport that consists of drivers racing around tracks at remarkable speeds. But does driving in a circle at great speeds really require skill? Many say yes, as it takes remarkable reflexes and awareness to control a car at such speeds. Others would note that NASCAR simply consists of making a series of left turns, only faster than people are usually accustomed to, and thus takes little skill to pull off. So, what’s the answer as to whether NASCAR takes skill to perform? Read on to find out!

Ask any racing driver (or any athlete, for that matter), and you are bound to hear different answers to the question of whether NASCAR takes skill. However, regardless of these answers, it should be clear that NASCAR undoubtedly requires skill. Some drivers insist that NASCAR requires raw skill and so much more to be successful, as money and connections allow them to truly thrive in the sport. While these areas are not necessarily tied to skill, they are important nonetheless. However, to athletes like former NFL quarterback Donovan McNabb, NASCAR is more of a mental sport, requiring less physical exertion or athleticism, and therefore, drivers of the sport should not even be considered athletes.

While people may never reach a true consensus on whether NASCAR drivers should be classed as athletes in the sense that other sports athletes are, it seems rather irresponsible to discredit the sport as lacking skill without first analyzing the factors that affect NASCAR drivers throughout their careers.

What Does It Take to be a NASCAR Driver?

Simply put, NASCAR, like any activity that demands attention to detail, is not a sport that anyone can pick up right away. While the ability to pick something up easily does not necessarily indicate that skill is required to participate in the sport, NASCAR drivers at the highest level of the sport begin training at a very young age, as it is not possible to be a winning NASCAR driver without substantial and proper training under your belt.

Without knowledge of their car's ability, as well as the capability to control such a powerful vehicle under pressure, NASCAR racers would not find success. In addition, maneuvers like passing and drafting, which could be considered skills in their own right, take time and energy in order to master.

In addition to knowledge, aptitude for control, and substantial training, NASCAR drivers must be conditioned to withstand the physical demands of a race. A 2012 ESPN study conducted on driver Danny Hamlin revealed that drivers must be in good physical shape to endure exceedingly hot temperatures. Additionally, extreme G-forces are exerted onto the driver's body while turning, which, if physically unprepared, can overwhelm them. Famous drivers like Jimmie Johnson ran many miles in order to condition themselves for a race, while other drivers, such as Tony Stewart, trained by driving constantly.

It is impossible to say exactly how much skill a NASCAR driver needs in order to compete, but it can be concluded that skill is most certainly something that NASCAR drivers need to succeed. After training and conditioning, drivers apply their knowledge of the sport to zoom around a track full of other drivers strategically attempting to gain positions.

In the same way other sports require a great deal of skill to play, NASCAR takes a great deal of skill to participate in. Great drivers are not born overnight and must diligently study and practice their sport, just like any other athlete. While McNabb may feel that NASCAR drivers are not athletes in the same sense that he is, there is a reason that sports like football and NASCAR both produce recognizable names. The most skilled athletes in any sport are bound to receive acclaim, and that is no accident. If everyone possessed the skill to play professional sports, perhaps no one would have ever praised the names of Dale Earnheardt, Jimmie Johnson, or Donovan McNabb, for that matter.

Pages Related to How Much Skill Does It Take To Drive NASCAR?