How Much Is A NASCAR Engine? 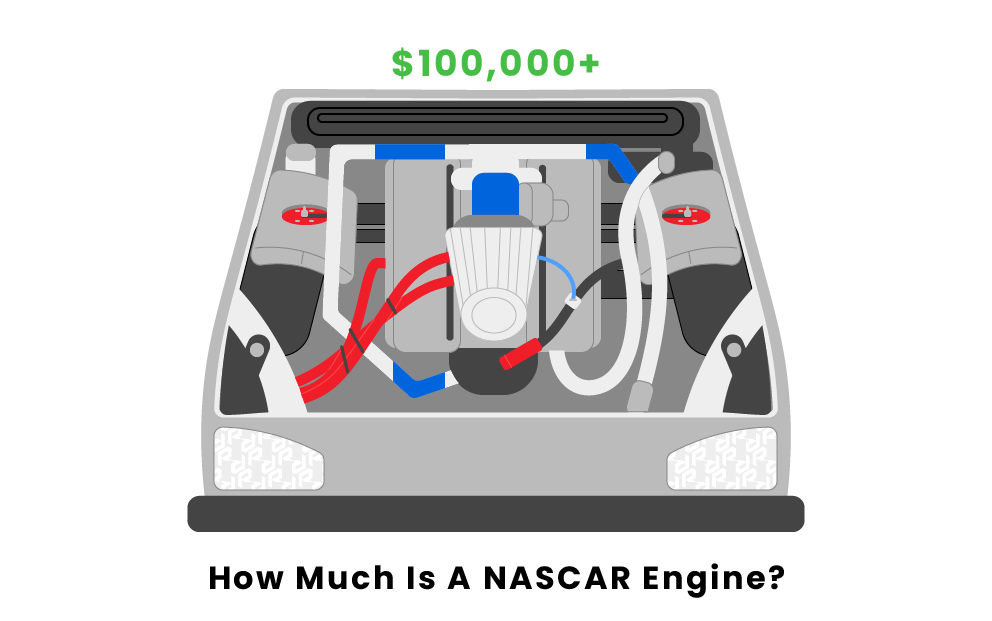 NASCAR engines are the most important part of the car besides the driver and therefore, are the most expensive.

Depending on the car and the manufacturer, the engine under the hood varies.

On average, a typical NASCAR engine costs around $100,000. However, during some racing events, teams use more than one engine. For example, a car competing in the Daytona 500 may use up to three engines throughout the event. In order to standardize and lower costs, teams are no longer forced to buy individual engines for their cars. Instead, they lease engines from one of the three manufacturers, Ford, Chevrolet, and Toyota. As part of the lease contract, the manufacturer maintains and rebuilds the engines and provides technicians to help with tuning.

Why the High Cost?

A NASCAR engine is the most expensive part of the car and requires the most attention. Many of the top racing teams in the league tune and customize their own engines, which can take more than 100 hours to complete. NASCAR teams lease engines from the manufacturers, who constantly maintain and replace them, sometimes using multiple engines in a single car during a race weekend. The cost to lease engines for a NASCAR Cup Series car exceeds $2 million per season. This large-scale production helps to support the team’s many drivers so that they can use a new engine for each race.

While NASCAR engines typically fall within a given price range, the engines are unique to each car based on the manufacturer and parts used in production. Some of the top tuners of NASCAR engines include Toyota Racing Development, Earnhardt Childress Racing, Hendrick Motorsports, and Roush Yates Racing. While many of the larger teams tune their engines in-house, other teams choose to outsource the tuning of their engines. Regardless of who does the tuning, all NASCAR engines are built by one of three manufacturers: Ford, Chevrolet, or Toyota.

When building an engine, teams may utilize different designs to make their engines unique. One design aspect that differs among NASCAR engines is the valve timing. Some engines use a traditional single camshaft, while others use a more modern design of twin camshafts. The big difference between them is the single camshaft is responsible for both intake and exhaust valves, while with the twin camshafts, one is responsible for intake while the other is in charge of exhaust. In addition, the single camshaft makes it difficult for a car to reach its maximum performance while experiencing both high and low revolutions per minute.

As technology evolves, there has been a push for hybrid engines in NASCAR. The engines will potentially include an internal combustion component as well as an electric power plant. Manufacturers believe that these engines will sound the same as the current engines and do not think the horsepower will be reduced due to the structural change. Ultimately, this shift in focus will impact the current production price and cost of NASCAR engines.

How much is a NASCAR car?

A NASCAR race car costs upwards of $500,000 to build and maintain. This includes the prices of the engine, chassis, transmission, and tires. Maintenance costs can get even higher depending on the amount of wear and tear on key components such as the engine or transmission. The cost of a NASCAR car compounds over a season, as bad wrecks and mechanical failures can require the entire car to be replaced.

Can you buy a NASCAR engine?

Engines used in NASCAR race cars are highly-tuned versions of engines readily available to the public, so purchasing an engine and tuning it to NASCAR standards is certainly possible. Some racing teams have also been known to sell parts of their cars no longer in use, which could be another way to acquire a NASCAR engine.

How much horsepower does a NASCAR engine have?

Unrestricted NASCAR Cup Series engines are capable of making upwards of 1,000 horsepower. However, NASCAR puts a limit on horsepower for cars competing in the Cup Series to prioritize a level playing field and driver safety. The current horsepower limits in the NASCAR Cup Series are 670 for normal tracks and 510 for superspeedways.

Pages Related to How Much Is A NASCAR Engine?